Who is to Blame for Bethlehem’s Strangulation of Christian Life?

Home » Who is to Blame for Bethlehem’s Strangulation of Christian Life? 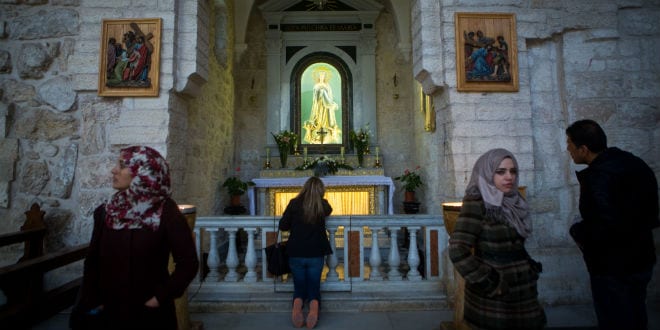 As Christmas approaches in Bethlehem each year, fewer and fewer Christian residents take part – not because the tree in Bethlehem’s Manger Square is any less grand than the year before or because less money is allocated toward the festivities – quite the opposite, actually. While the Bethlehem Municipality has invested in marvelous concerts, carols, processions, a midnight mass, tourism and restored pillars in the Church of the Nativity, the fact remains that the Christian population is decreasing each year in the city where Christians believe Jesus was born.

According to NBC News, 12 percent of Bethlehem’s population is Christian – a high percentage compared to the greater Palestinian Territories, now less than two percent compared to 80 percent in the 1950s. Salman maintains that what will keep Christians in Bethlehem is “when human dignity is respected and equal rights are granted, only when the Israeli occupation is over and Palestinians are able to achieve their full potential on their own land.”

However, Salman ignores a central tension that contributes to the reason why Christians are leaving, the real strangulation of Christians in the Middle East is the cultural and religious suffocation that they experience in mostly-Muslim cities like Bethlehem.

Salman fails to mention that there is a great atmosphere of hostility toward Christians in the broader Middle East, with Bethlehem no exception. According to Dexter Van Zile, Christian Media Analyst for the Committee for Accuracy in Middle East Reporting in America (CAMERA), in the Middle East at large, Christians are the “low cost, no-cost target of genocidal violence and hostility.”

Van Zile maintains that with the attention of Christians throughout the entire world, “the Palestinian Authority knows that it simply cannot allow Christians to be harassed in the Bethlehem Area (or in the entire West Bank) the way they are elsewhere in the Middle East.” But nevertheless, the CAMERA analyst reported seeing harassment of Christians by Muslim extremists in Manger Square near the Church of the Nativity, handing out extremist tracts. “Just imagine what would happen if Christians tried to proselytize openly among the Muslims!” remarked Van Zile, who called the atmosphere of hostility toward Christians in Bethlehem “unmistakable.”

He told Breaking Israel News of sitting down in a Bethlehem restaurant within sight of the Church of the Nativity. “A loudspeaker from a nearby mosque started blaring out a loud and intimidating message. I grimaced in pain at the loudness of the message coming out of the muezzin. The owner of the restaurant saw my grimace and said, “Oh, it’s gotten worse over the past few years.” He went on to tell me that he had heard hostile anti-Christian messages from the loudspeaker. Imagine having to live in an environment where anti-Christian messaging is part of the urban atmosphere. That’s how it was in Bethlehem, where Jesus was born!”

On Christmas specifically, Van Zile reported that the Christians in Bethlehem “are deployed by the Palestinian Authority every Christmas to portray Israel as behaving like Rome in the New Testament.” But the real problem is Muslim supremacism, not Jewish sovereignty, he added.

Even with stories like Van Zile’s, according to Arab journalist Khaled Abu Toameh in a Gatestone Institute report, “The leaders of the Christian community in Bethlehem rarely talk in public about the tensions with their Muslim neighbors; they prefer instead to direct their criticism against Israel. By turning a blind eye to the problems facing Christians, these leaders are doing a disservice to their own community.”

Although Jerusalem is just six miles north of Bethlehem, the Christian population in Israel can freely practice their faith – the Municipality of Jerusalem even gives out free Christmas trees to Christian residents.

Israel is likely to be their only respite in an anti-Christian region. Perhaps somewhat paradoxically, the Jewish State is the only country in the Middle East where the native population of Christians has increased since 1948. “In 1949, there were about 34,000 Arab Christians living in Israel, today there are more than 130,000. Christians have declined as a percentage of Israel’s total population, but in absolute numbers, the Arab Christian population in Israel has increased by close to 300 percent,” reported Van Zile.

“Anti-Israel polemicists, and even a few Christian non-profits who use stories of Jewish villainy as a fund-raising technique, will portray the decline the Christians as a percentage of Israel’s overall population (due to the growth of the Jewish and Muslim populations in Israel, both of which have grown faster). But the fact is no other country in the region has seen an increase in absolute numbers like what we’ve seen in Israel. And to the great embarrassment to Christian anti-Semites who use Israel as their whipping boy, this increase has taken place in the Jewish State. It’s just another reason to bless and honor Israel,” related Van Zile.

“Christians in the West should be grateful that Israel sets the gold standard for its treatment of Christians in the Middle East, but all too many Christian organizations return the favor by rebuking Israel,” he said.

Van Zile further lamented the fact that many non-Evangelical Christians have harsher words for Benjamin Netanyahu than they do Hamas. “From a peacemaking standpoint, that doesn’t make any sense. From the standpoint of the Gospel, it’s insane,” he continued. “Fortunately, a growing number of Christians in Israel are starting to wake up to what’s going on in the rest of the region and are signing up for military service.”

When one zooms out to the greater Middle East, it becomes clear why a majority of Christians are leaving Bethlehem. In the Gaza Strip, Van Zile says Christian life is on its last legs: “There are fewer than 1,300 Christians in the strip and they are subjected to ongoing oppression by Hamas and other extremists. Over the years we’ve seen reports of forced conversions and murders perpetrated in at least one instance, by Hamas.”

Van Zile posed that Christians who lie by omission about the evils of Hamas to “help it in its propaganda war against Israel” discredit the Christian faith. “That’s a very high price to pay,” he said. Even with Christians in Bethlehem having the benefit of being close to the Church of the Nativity, Van Zile believes that it is “high time” to evacuate Christians from Gaza and relocate them some place safer “so we no longer have to pretend Hamas is anything other than a genocidal terrorist organization that terrorizes Christians, Jews and Muslims both Israel and the Gaza Strip.”

Outside of Gaza, the atmosphere for Christians in the Middle East is not much better – outside of the Palestinian Territories, Van Zile announced, “More than one million Christians have been driven from their homes in Iraq and Syria over the past decade and they are a beleaguered and harassed minority in Egypt as well where Coptic Christians are regularly massacred and their churches burned. Islamic scripture, doctrine and practice sets Christians up as legitimate targets of violence when things go badly in Muslim-majority countries.”

The decreasing Christian presence is part of a tragic trend in the Middle East that has less to do with Israel’s “strangulating policies” and more to do with rise of the Islamic State (ISIS). ISIS has contributed to an already-growing mass exodus and in some cases, genocide, of the Christian population in countries such as Syria, Saudi Arabia, Iraq, Libya, Iran, Turkey and Egypt.

Samir Qumsieh, an important Christian Bethlehem leader, Director of Al-Mahd TV station, and researcher on Christian affairs in the Holy Land and Middle East, understands that in order to save the Christian communities of the Middle East, one must call out the escalation of extremism and radical Islam in the world for what it is. After seeing photographs of an ISIS-murdered baby in a recent deadly Cairo church attack, Qumsieh exclaimed, “What kind of religion accepts a baby torn into two pieces?”

Qumsieh explains that the Palestinian Territories are “not far from the expansion of radical Islam,” both physically and ideologically. Qumsieh “does not trust Hamas because they are radical.” While there were 5,000 Christian Gazans in 2006, there are now just 1,000; in addition, churches are often demolished.

Qumsieh also blames a brain drain, decreasing Christian birth rates, and emigration for decreasing Christian presence in the Middle East, where he says no longer sees a future for Christians. “The future is black,” he exclaims. “The devil himself is ruling those radical Muslims who are destroying everything Christian […] the present [radical Islamic] regime should be totally demolished.”

Van Zile agreed that the future for Christians in Bethlehem is bleak, declaring, “The Palestinian Authority is to blame for the departure of the Christian young people that seems to be taking place in and around Bethlehem. They have an obligation to protect Christians, but they only protect them to the extent they can be deployed to demonize Israel.”

To keep Christians in Bethlehem, Van Zile posed that Palestinians must revolutionize the way they view themselves. “If they continue to embrace stymieing Jewish sovereignty and well-being as their national goal, all Palestinians, Christians included, will continue to suffer. Once they decide to fight for their own welfare, instead of merely seeking to undermine Jewish freedom and welfare, life will get better for everyone in the Holy Land.”