Will Catastrophic Yellowstone Eruption Set Off War of Gog and Magog?

Home » Will Catastrophic Yellowstone Eruption Set Off War of Gog and Magog? 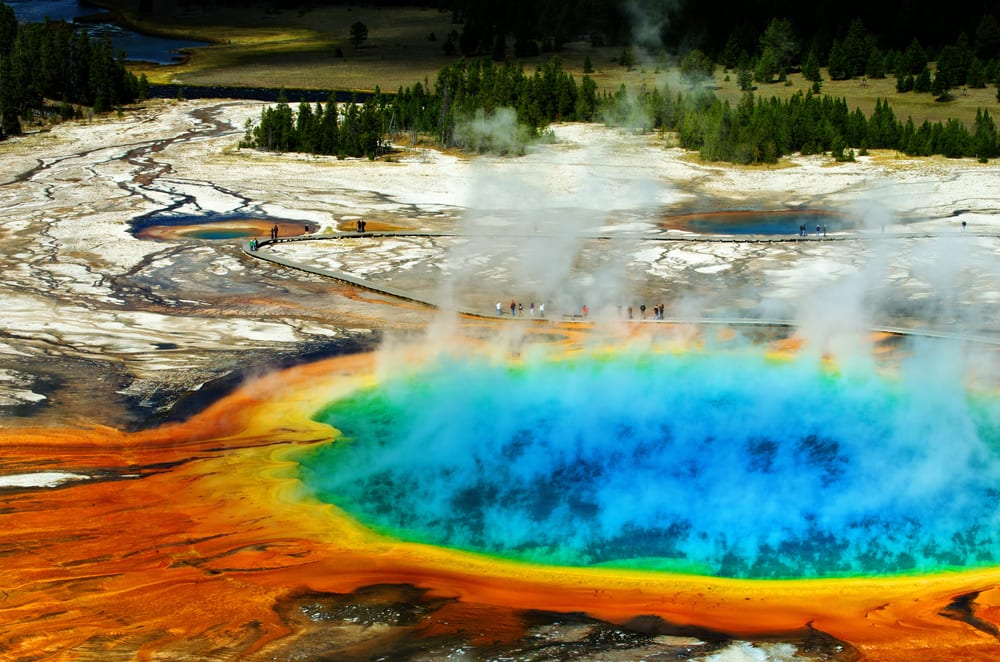 A mystic rabbi suggested that an alarming spate of recent geyser activity in Yellowstone National Park may be the precursor to the pre-Messiah war of Gog and Magog. While scientists predict that seismic activity will increase, people of faith look for the spiritual implications.

After four years of total silence, the Steamboat Geyser in Yellowstone National Park in northwest Wyoming came back to life on Saturday, shooting steam 200 feet into the air. Steamboat  is the largest in the world with eruptions reaching up to 400 feet. This latest eruption set a new record for the geyser of 30 eruptions in one year. The previous record of 29 eruptions was set in 54 years ago in 1964.

The geyser erupted for the first time this year on March 14. It was the first activity at the site since 2014. The geyser is unpredictable with eruptions dispersed anywhere from days to years apart. The  geyser did not erupt at all from 1911 to 1961.

Yellowstone park is seismically active with more than 10,000 thermal features of which more than 500 are geysers.

“The heightened activity at Steamboat this year is uncommon but not unprecedented. We have seen similar activity twice previously; once in the early 1960s, and again in the early 1980s. Conversely, the world’s tallest active geyser has also exhibited years of quiescence or no major eruptions, with the longest being the 50-year period between 1911 and 1961,” Jeff Hungerford, Yellowstone’s park geologist, told the local media. “We’ll continue to monitor this extraordinary geyser.”

A correlation between geyser activity and earthquakes has not been proven, but some scientists believe that geological shifting may lead to increased geothermal events. The Yellowstone region has seen a period of increased earthquakes and swarms of minor tremors. In June 2017, the Wyoming area of Yellowstone was hit by a persistent swarm of approximately 2,400 tremors.  These swarms are continuing this year at a slightly lower rate.

Rabbi Yekutiel Fish, author of the Hebrew Torah blog, Sod HaChashmal, emphasized that forces of nature, such as earthquakes and volcanoes, are manifestations of God’s judgement, denoted in the Bible by His name ‘elohim.’ The rabbi noted that the seismic aspect of God’s influence in the world was explicitly described in Psalms.

Therefore we are not afraid though the earth reels, though mountains topple into the sea. Its waters rage and foam; in its swell mountains quake. Selah. Psalms 46:3-4

“The entire world will be judged before the Moshiach (Messiah),” Rabbi Fish told Breaking Israel News. “Nature will change, be less normal, because God will be guiding it in a more direct manner.”

“This will be especially true during the War of Gog and Magog,” he said. “The war will be unique in that it won’t be simply a war between countries. God will play a major role via nature, through natural disasters.”

“The verse in Psalms is clearly referring to tsunamis which will increase in the days preceding Messiah,” Rabbi Fish said. But we also see that earthquakes will increase around the world.”

In fact, scientists have predicted that this year could see a surge in seismic activity around the globe. In their study published in Geophysical Research Letters, Roger Bilham and Rebecca Bendick presented a model that predicts that 2018 will be the opening of a window of potentially increased large earthquake activity due to slight changes in the spin-rate of the Earth. The rate at which the planet spins changes cyclically and the scientists claim that five to six years after a period of relatively slow spin, a 30-percent increase in seismic activity takes place. Though they are unsure of the duration of the increase, they conjecture it can last up to five years. The last global slow-down took place in 2012.

Scientists have also noted that during periods of decreased glaciers it is easier for magma to reach the surface and feed volcanic eruptions. It can take thousands of years after the glaciers melt for volcanic activity to rise. Several studies over the last 40 year have suggested that, as the ice vanished, volcanic eruptions became much more frequent. A 2009 study, for example, concluded that between 7,000 and 12,000 years ago, the global level of volcanic activity rose by up to six times. Around the same period, the rate of volcanic activity in Iceland soared to at least 30 times today’s level. Though the cause of climate change is currently a matter of debate in the scientific community, it is generally accepted that temperatures around the globe are rising. If so, this may lead to increased volcanic activity.

Although the probability of an eruption at Yellowstone is minuscule, only a one in 100,000 chance in any given year according to scientists, the results of such an event would be catastrophic in the extreme. The Yellowstone Caldera is listed as the most dangerous supervolcano in existence and as such, is the most monitored volcano in the world. It has erupted three times over the last 2 million years, most recently about 70,000 years ago.

The biggest danger from an eruption is not the lava but the ash. The Yellowstone eruption two million years ago produced 2,500 times as much ash as the 1980 Mount St. Helens eruption. Ash is caustic when inhaled and volcanic eruptions can spew the ash high into the atmosphere. The pileup of ash on rooftops has resulted in building collapses. A Yellowstone supereruption would disrupt electronics and endanger human health in Montana, Idaho, Wyoming, and affect other parts of the country. Moreover, a month-long supereruption could affect the global climate for several years.

In comparison, relatively minor eruptions at Eyjafjallajökull, Iceland in 2010 led to 20 European countries shutting down their commercial air traffic for one week, affecting more than 20 million travellers.

Major volcanic eruptions that spew ash into the atmosphere obscuring the sun can lead to a volcanic winter in which global temperatures drop. The phenomenon is not infrequent, occurring approximately once each century. The most recent took place in 1991 after the explosion of Mount Pinatubo in the Philippines, cooling global temperatures for about three years. A more significant drop in temperatures could lead to a global crisis in food production.

NASA scientists assured the public that the likelihood of a supereruption is minuscule but nonetheless conducted a study in 2017 to determine the feasibility of preventing the volcano from erupting. NASA proposed introducing water at high pressure six miles underground. Nevertheless, according to Brian Wilson of the Jet Propulsion Laboratory, the project might trigger, instead of prevent, an eruption.

In his weekly sermon last week, Rabbi Nir Ben Artzi predicted that all manners of natural catastrophes are going to increase in the coming year.

“God will judge, ‘who to life and who to death,’” Rabbi Ben Artzi said. He also predicted that international conflict will increase. “The heart of the king is in the hands of God,” he said.

In a previous sermon, he explained why God uses nature in this manner.

“People believe that nature just happens,” Ben Artzi said. “That is a mistake we make because we don’t always see or hear God. If God left the world solely in our hands it would have been destroyed a long time ago.”

Rabbi Fish emphasized that it is a mistake for men to think they can control nature.

“The only thing we can do is pray and do tshuva (repent),” Rabbi Fish said. “But these are the greatest acts a man can do. In our age, when the messsiah is imminent, this can save the world.”