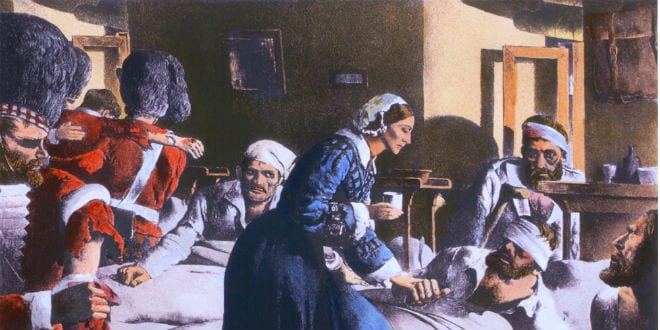 Nurses around the world will celebrate the 200th anniversary of Florence Nightingale’s birth in May 2020. The British woman – known as the Lady with the Lamp – is regarded as the founder of modern nursing.

With people around the world living longer but nevertheless suffering from a wide variety of chronic disease and needing expert medical care, we need a lot more like her. The World Health Organization (WHO) is currently holding the “Nursing Now’ campaign that will run to the end of 2020 to encourage more women – and men – to go into the nursing profession.

She was born in Florence, Italy (hence, her given name) and was an excellent student, urged to succeed by her father. Nightingale became a social reformer, statistician and the foundational philosopher of modern nursing. She continued working until her death in 1910 in London.

Put in charge of nursing British and allied soldiers in Turkey during the Crimean War (1853-6), she devoted herself to patients in the wards, making round also at night with her lamp. She established formal nursing education by setting up the first scientifically based nursing school – the Nightingale School of Nursing at St. Thomas’ Hospital in London when she was 40 years old. She also trained midwives to attend women in childbirth.

A devout liberal Unitarian Christian, she took comfort in her faith and as a teen, she experienced one of several “calls from God” to alleviate human suffering. Ironically, her family did not approve at first of her going into nursing because it was regarded then as a job for men or women from low social classes. But she managed despite their opposition to enroll at Germany’s Institution of Protestant Deaconesses where she learned elementary nursing skills. She went on to train nurses at London’s King’s College Hospital.

It was the Crimean war – when the Ottoman Empire declared war on Russia following a number of disputes over holy places in Jerusalem – that changed her life. While most of the battles were in Russia, British hospitals were mostly in Constantinople (Istanbul), where sanitary conditions were horrible and described as the “Kingdom of Hell.” Nightingale was determined to clean the hospital wards, clean up and feed wounded soldiers properly and establish nursing care standards, thereby reducing the death rate significantly.

Nursing Now is the WHO’s three-year global campaign run in collaboration with the International Council of Nurses by a board made of professionals from 16 countries.

Obviously, there are many more nurses than physicians; doctors do not have such close connections with patients and may not even be able to match their faces with their names. Nurses are at the heart of most health teams, playing a crucial role in treatment in community clinics and medical centers, health promotion and disease prevention. Nurses also have a major role in developing new models of community-based care and supporting local efforts to promote health and prevent disease.

Nursing Now is based on the findings of the Triple Impact report released by the All-Party Parliamentary Group on Global Health in the UK for raising the profile of nursing globally and enabling nurses to work to their full potential.

The report called for raising the number of nurses worldwide and raising the level of the profession, promoting gender equality and supporting economic growth. The authors stressed that investing funds in the health professionals promotes economic growth and argued that employment of more nurses generate many benefits.

The changing needs of the 21st century have given nurses an even greater role to play in the future. New and innovative types of services are needed – more community and home-based, more holistic and people-centered, with increased focus on prevention and making better use of technology. These are all areas where nurses can play a leading role. However, maximizing nurses’ contributions will require that they are properly deployed, valued and included in policy and decision-making.

Nursing Now will work with partners around the world to advocate for more nurses in leadership positions – to help nurses achieve the influence they deserve. It will also help nurses access better education and training, while supporting them to share research and evidence of effective practice.

It will also encourage health leaders to invest in nursing and introduce new models of care that maximize nurses’ contributions to achieving Universal Health Coverage, which would guarantee everyone the right to quality health care without financial hardship.

Thus nursing is no longer emptying out bedpans and bathing patients. Auxiliary workers with much less training do that. Nursing students learn to operate sophisticated electronic equipment and offer complicated treatments hand-in-hand with doctors. There are also nurse practitioners (NPOs) – advanced practice registered nurses who have additional responsibilities for administering patient care than registered nurses. They can prescribe medication, examine patients, diagnose illnesses and provide certain treatments, much like physicians do.

Israel is one of the countries that has joined the Nursing Now campaign. Although it has a relatively young population compared to all European countries, its longevity rates almost have produced an ageing population. The Health Ministry held a festive launch of the campaign to encourage young people to go into nursing. It also aims to expand nurses’ influence on the healthcare system for the benefit of the population. The campaign will raise the profile of nurses, promote international research collaboration on nursing research and creating a network of nursing leaders that will bring change.

More than two decades ago, there were a number of strikes and other protests by Israeli nurses who demanded better salaries, more manpower slots and better advanced training. To a large extent, these goals have been met, and there has been no labor unrest in recent years. Almost all nursing schools are academic, leading to a bachelor’s degree in nursing, and many graduate programs are available. Women and men with academic degrees in other fields from biology to political science are being encouraged to study for two years to become registered nurses.

As a country of Jewish immigration, Israel is also encouraging would-be immigrants who are already nurses to come and pursue their profession here. Licensing exams are given in various languages to help them show their level of skills and knowledge.