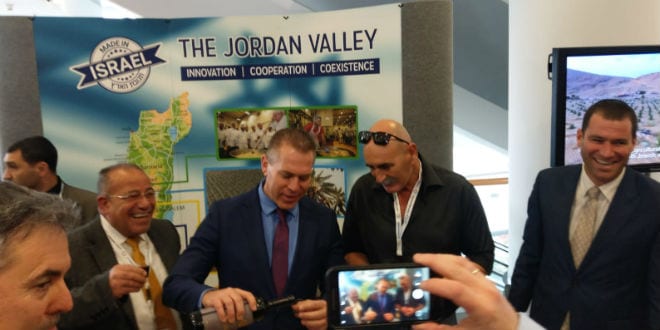 Recently released economic data has shown that the Boycott, Divestment and Sanctions (BDS) movement not only harms sectors of the Israeli economy and its workers, but is also detrimental to Palestinian employment too.

At the Deutscher Israelkongress – the largest European pro-Israel conference with more than 3,000 people in attendance – Minister of Strategic Affairs Gilad Erdan and the Mayor of the Jordan Valley Regional Council David Elhayani presented data revealing that coexistence between Israelis and Palestinians is the best and most economically beneficial solution for all sides, particularly in joint industrial zones in Judea and Samaria.

According to data from Israel’s Civil Administration approximately 25,000 workers, 18,000 of whom are Palestinians, are employed in the joint economic zones located within Judea and Samaria. The Palestinian Central Bureau of Statistics also cites that Palestinians working in Israeli jobs account for 11.7% of the Arab workforce in Judea and Samaria in 2014, and their total salaries in the West Bank in 2013 made up 12.3% of the GDP of the entire PA.

A stark comparison can be drawn with Palestinians who work in the Gaza Strip; there the average daily wage is approximately 70 shekels (NIS), three times less than their compatriots who work in settlements, the Jordan Valley and joint industrial zones.

Elhayani was present to highlight how BDS activity in Europe has severely affected both Israeli and Palestinian farmers in the Jordan Valley.

Israel exports approximately 90% of its produce, and the crop that has been affected in the Jordan Valley in particular is peppers. Farmers in the Jordan Valley have been forced to divert pepper exports from Western Europe to Russia and Eastern Europe, where prices are 50 to 30-percent lower. This drastic drop meant that farmers of the Jordan Valley, both Jewish and Palestinian alike, saw a significant reduction in their income, with an estimated total loss of 100 million shekels.

The Ministry of Strategic Affairs is responsible for attempting to combat the threat of BDS, and brought the farmers to Germany to highlight the benefits of coexistence and a shared economy.

“In this region both Jews and Palestinians live and work together in harmony. It’s important for our friends in Europe to realize that the key to peace, stability and good neighborly relations between nations begins with economic development, especially in the joint industrial zones,” said Erdan. “Furthermore, the European continent has already suffered the effects of the ill-fated boycotts against Jewish products, and therefore should be wary and resist anti-Semitic actions of the BDS movement.”

Elhayani explained: “Boycotts against our products means boycotts against Palestinians and Israelis families alike. The economic warfare waged against our farming communities only increases suffering for all parties involved and does nothing toward creating dialog.”