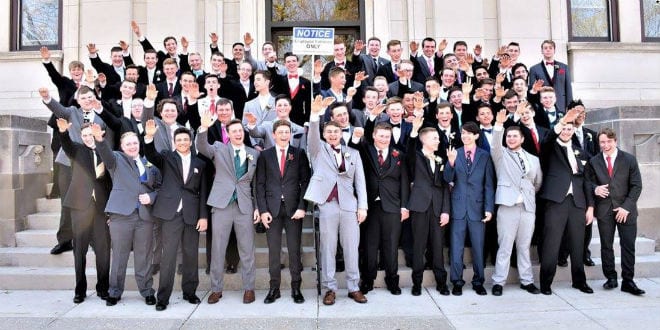 A group of Wisconsin high-school students chose a disturbing manner to pose for their prom photo: arms extended in a Nazi salute.

The photo, reportedly taken last spring, resurfaced on social media a few weeks ago, shortly after the Pittsburgh synagogue shooting. It shows approximately 50 high school boys, all caucasian save one, in their prom tuxedos. Most of the boys have their arms raised in what is universally recognized as the Nazi salute.

Baraboo Superintendent Dr. Lori Mueller told Wisconsin Public Radio and The Associated Press that she became aware of the photo’s existence on Monday. She issued a statement concerning what she called “highly inappropriate gestures.”

“The Baraboo School District is a hate-free environment where all people, regardless of race, color, religion, creed, sex, sexual orientation, gender identity, national origin or ancestry, are respected and celebrated,” Mueller said in the statement.

“The school district is investigating this situation and is working with parents, staff and local authorities,” Mueller explained. “If the gesture is what it appears to be, the district will pursue any and all available and appropriate actions, including legal, to address the issue.”

The Baraboo School District confirmed the photo wasn’t taken on school property or at a school-sponsored event. The Baraboo police are also investigating the incident.

The photographer, Pete Gust, hosted the photo on a page on his website titled “BHS Prom Pics.” In comments to CNN affiliate WISN, Gust said that critics were taking the photo out of context. He claimed that he had simply asked the students to wave goodbye to their parents.

“There was no Nazi salute,” he said.

Gust has deleted the photo from his website and replaced it with a post saying that the photo had been deleted “due to the malevolent behavior on the part of some in society.”

“It is too bad that there are those in society who can and do take the time to be jerks; knowingly and willingly to be jerks! The Internet can be a wonderful tool but for some there is an overwhelming urge to destroy. The destruction may not be physical but instead it can be bullying that is intellectual or emotional,” he wrote.

“To anyone that was hurt I sincerely apologize. To those who have harmed them, we as society often ignore them I have chosen not to do that. YOU ARE JERKS! Grow up! Be kind, Be gentle, Be civil!”

One student in the photo was not giving the Nazi salute but gave a white supremacist hand signal instead, known as “the white power gesture.”

While many #Baraboo students appeared to give the Nazi salute, another student in the front row of a widely-shared photo gave another symbol — whether genuinely or purely for trolling — that has became known as the "white power gesture."https://t.co/VeMEt36zZJ pic.twitter.com/52NTZAKiGT

Jordan Blue, a student in the top right of the image who did not participate in the group gesture, told CNN that he was surprised that his peers had spontaneously displayed the Nazi gesture.

“The photographer said to raise your hand, but he didn’t say a specific way, and my peers should not have raised it in the specific way that was the offensive way and hurtful way,” Blue said. “It was a scary moment, and it was very shocking and upsetting, and it was a huge misrepresentation of the school district and the community of Baraboo.”

The photo has generated a large negative response. The Auschwitz Memorial located at te site of the death camp in Poland said that the display of the symbolic gesture by young people was deeply disturbing and suggested that the students needed to be educated about the belief system behind the Nazi salute.

“We must all teach our children #tolerance and #understanding, both – at home and in school. For tolerance cannot be assumed… it must be taught. We all must make it clear that hate is never right and love is never wrong!” (Roman Kent, #Auschwitz survivor) https://t.co/jxdv5LHS5G

The American Civil Liberties Union (ACLU) released a statement acknowledging that displaying the Nazi symbol was within the students’ First Amendment right to free speech, it was, nonetheless “completely shocking and reprehensible.”

“We hope these students understand what a mistake this was, and we hope that they will join work against the hateful ideology that they appeared to treat so casually in the photo,” the ACLU statement read.

More than 5,000 people have signed on to an online petition calling on the Baraboo School District to suspend students who appear to be giving a Nazi salute in a group photograph shot before their spring prom in May.

this post has since been deleted, but i just want @barabooSD to be aware of the disturbing actions that are represented in this photograph. this is BEYOND sickening. pic.twitter.com/Fer5heTted