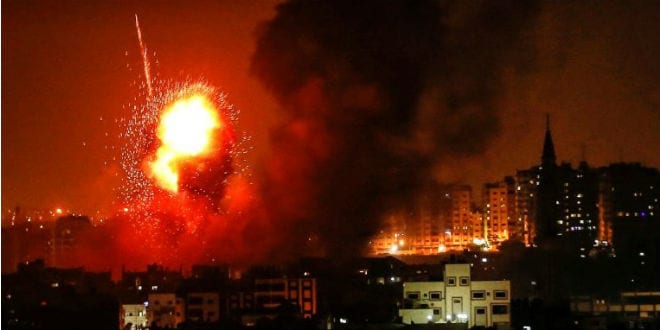 The IDF unit was operating undercover in a civilian vehicle two miles inside Gaza when they were challenged by Hamas forces. An exchange of gunfire led to Colonel M. being killed and another IDF soldier being moderately wounded. The IDF unit killed a senior Hamas commander and several other terrorists. The unit subsequently called in aerial support to bomb the surrounding area and exfiltrated out of the Gaza Strip.

According to the Hamas-run Gaza health ministry, seven Palestinians were killed including Nour Baraka, part of the Hamas terror tunnel program and commander of a Khan Younis regional battalion. Another seven Hamas terrorists were also wounded.

IDF Chief of Staff Gadi Eisenkot praised the operational prowess of the IDF troops under fire.

“An IDF Special Force operated tonight in a very meaningful operation to Israel’s security,” Eisenkot said in a statement. “The force and IAF troops fought a brave battle calmly and heroically. I salute our troops. The IDF owes Lt. Col. M. more than we can say. I embrace his family and wish the injured officer a quick recovery.”

The IDF released a statement that the special operation was not intended to kill or abduct terrorists but to strengthen Israeli security and gather intelligence. Maj. Gen. (res.) Tal Russo, a former commander of the IDF Southern Command refuted these claims in an interview with Channel 10 News.

“Activities that most civilians aren’t aware of happen all the time, every night and in every region,” Russo said. “This action — an operation that was apparently exposed — wasn’t an assassination attempt. We have other ways of assassinating people and we know how to do it much more elegantly.”

Palestinian media reported the Israeli troops had initially tried to capture Baraka during the raid, but that the Hamas commander was shot dead in the exchange of gunfire that resulted from the operation being exposed. This was later confirmed by the IDF.

Initial reports that an IDF soldier was abducted were inaccurate.

In the early morning after the incident, 17 rockets were launched from Gaza at Israel. The Iron Dome anti-missile system intercepted 3 of rockets; the others exploded in open fields. One rocket hit a greenhouse in the Eshkol Region, causing light damage. No injuries were reported. There were no reports of IDF airstrikes in response to the rocket fire.

As a result of increased tensions on the southern border, the Air Force increased the number of Iron Dome batteries deployed in the Gaza envelope with additional interceptors. In addition, reinforcements, mainly infantry battalions, were deployed in the area.

Prime Minister Benjamin Netanyahu cut short an official state visit to Paris due to the events in the south. It was reported that he will attempt to salvage a ceasefire agreement with Hamas that was being brokered by Egypt. The flare-up comes two days after Israel allowed Qatar to send $15 million in cash to Hamas in Gaza as part of the ceasefire process.

Earlier on Sunday, before the incident in Gaza, Netanyahu expressed pessimism about the possible success of the ceasefire with Hamas.

The Karmi and Erez checkpoints are operating as normal on Monday morning allowing the transfer of goods from Israel into Gaza.