California Earthquakes: Seismologists Search Depths, But Cause May Be in Heavens

Home » California Earthquakes: Seismologists Search Depths, But Cause May Be in Heavens 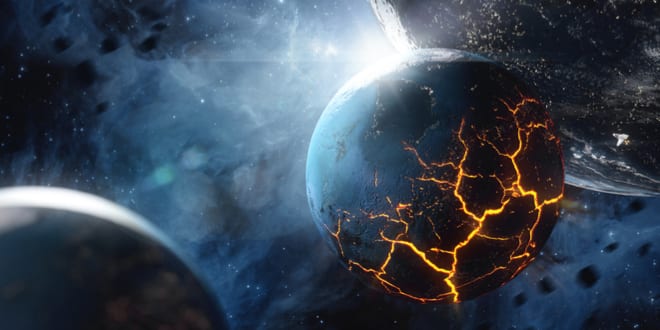 In 2018, two separate geologic faults generated swarms of earthquakes on the west coast of the United States. While seismologists searched the depths of the earth for clues, a Nibiru expert suggested that scientists should instead lift their eyes to the heavens to better understand the bigger picture.

The beginning of November witnessed a swarm of 39 earthquakes hitting Northern California over the course of 24 hours. The largest tremor, registering 4.1 on the Richter Scale, hit early Friday morning and was followed by 20 aftershocks. The seismic activity originated in the volatile San Andreas Fault.

The day before the San Andreas swarm of quakes hit Northern California, the Cascadia subduction zone, a fault in the tectonic plates running 700 miles from Vancouver Island in Canada down to California’s Cape Mendocino, shook, generating a 4.9 magnitude earthquake. Ten days earlier, the same region was hit by three quakes measuring 6.5, 6.6 and 6.8, which were followed by at least four aftershocks.

If a cataclysmic earthquake hits the West Coast, experts believe the Cascadia subduction zone, will be a more likely culprit. The largest earthquake in the continental U.S. was caused by a shift in the subduction zone on January 26, 1700, generating a tsunami so large it damaged villages in Japan. Oregon and Washington, adjacent to the subduction zone, have been heavily built up in recent years with little regard to potential seismic catastrophe. California, in comparison, has a much higher awareness of the dangers of earthquakes and has built accordingly in areas near the San Andreas Fault.

“Cascadia can make an earthquake almost 30 times more energetic than the San Andreas to start with, and then it generates a tsunami at the same time, which the side-by-side motion of the San Andreas can’t do,” Chris Goldfinger, a professor of geophysics at Oregon State University told CNN. FEMA estimated that a major seismic event in the subduction zone and the resulting tsunami could kill 11,000 people.

Scientists are concerned, with some suggesting that a major earthquake looms imminent.

“The bad news is we live in earthquake country,” Brian Kilgore, a geophysicist with the United States Geological Service (USGS) office, told SF Gate, a San Francisco news site. “The good news is these earthquakes that are large enough to be felt but don’t cause any damage are a good reminder to be prepared. A large earthquake isn’t a matter of if, but when.”

Though most scientists maintain that it is impossible to predict earthquakes, Ditranium, a self-proclaimed new-age seismic forecasting website run by researcher Frank Hoogerbeets, claims the recent tremors on the West Coast indicate that there is cause for immediate concern. Hoogerbeets bases his predictions on astronomical influences on the Earth.

“This activity followed on seismic unrest to the south in the Gulf of California and further offshore Mexico,” he wrote on his website. “The next big quake in California or at the West coast in general will probably hit sooner than later.”

Yuval Ovadia, whose videos on Nibiru have garnered hundreds of thousands of views, agreed with Hoogerbeets that seismic activity is influenced by astronomical phenomena, but Ovadia bases his theories on classical Jewish sources.

“We know that ancient wisdom connected what happened in the heavens to what happened in the earth,” Ovadia told Breaking Israel News. “The Talmud says that God sent the flood to the world in the generation of Noah by way of two stars that he added to the Pleiades constellation. The midrash (Torah commentary) explains that the addition of these stars caused water to come up from the ground and the mountains to spew out steam and fire. This is absolutely acceptable to science since the revolution of the moon around the earth is known to determine the tides.”

“Earthquakes and volcanoes are on the increase but rather than look for the cause under the earth, scientists should also be looking to the stars,” Ovadia said. “Scientists try to convince the public that they know everything and what they don’t know is unknowable. But the truth is that every year, they are surprised by new planets and unexpected close passes by comets. They don’t even know what is under the oceans.”

Ovadia described recent activity on Mars. About five weeks ago, a volcano-like phenomenon was observed on Mars. Mars does not currently have any active volcanoes and astronomers explained that the enormous cloud hovering over the mountain were ice-rich clouds over the summit of Arsia Mons. Though not unique, the ice-cloud is unusual and scientists are hard-pressed to explain why it suddenly appeared over a dormant volcano.

“Clearly, something is affecting Mars, generating this change,” Ovadia said. “It could be that something is moving in the heavens leading to these changes. If the scientists would connect the dots, see the bigger picture including what is happening here on Earth, they might understand.”