Did Brazil’s Election Signal the First Stage in Building the Third Temple?

Home » Did Brazil’s Election Signal the First Stage in Building the Third Temple? 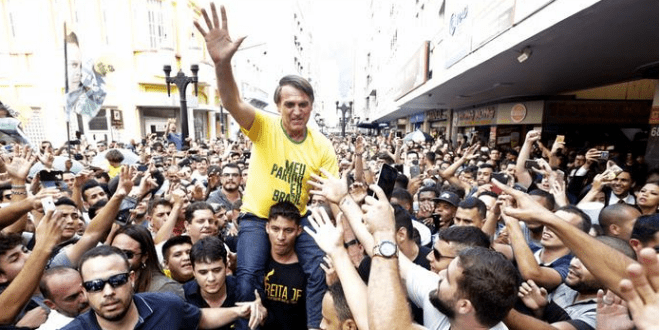 Brazil’s election of Jair Bolsonaro, a right-wing president, highlights a significant shift in thought, moving away from left-wing socialism while unabashedly embracing an approach to Christianity that supports Israel. It may be that this marks the beginning of the Third Temple, which some believe will be initiated in South America in a process that has already begun.

A former Captain in Brazil’s army, Bolsonaro entered politics by getting elected city councillor in Rio de Janeiro by the Christian Democratic Party. Religion is a large part of Bolsonaro’s appeal. In a 2017 speech, Brazil’s new president stated, “God above everything. There is no such thing as this secular state. The state is Christian and the minority will have to change, if they can.”

A controversial figure, he won the second round of voting with 55 percent of the votes after failing to achieve the required 50 percent in the first round. So divisive was the election that Bolsonaro was stabbed in September at a campaign event.

His political positions are identical to those of right-wing politicians in the U.S. (pro-life, pro-gun, anti-same-sex marriage). He also opposes immigration, particularly from Haiti, Africa and the Middle East. He openly praises President Trump, to whom he has been compared by the media, and, like Trump, he is frequently lambasted in the media for his off the cuff remarks.

Bolsonaro’s emulation of Trump led him to make a campaign promise three months ago that, if elected, he will transfer his country’s embassy to Jerusalem. And similar to Trump’s closing of the PLO Mission in Washington DC, Bolsonaro also vowed at the time to close the PLO’s office in his country’s capital.

Though these decisions seem purely political, they may have motives deeply grounded in visions of the Third Temple. Under the previous Brazilian administration in February 2016, the Palestinian Authority inaugurated its embassy in Sao Paulo. The modest building had a striking design: an octagon, the structure was topped with a gold dome. The architecture bore an unmistakable message: the PA’s mission in Brazil was to lay claim to the Temple Mount.

The message was not lost on Brazilians who are no strangers to Temple Mount imagery. Sao Paulo is home to a church built as a four-times larger-than-life $300 million model of Solomon’s Temple that can seat 10,000 worshipers.

If the recent election signals a shift in Brazilian politics towards Israel, it could be that the body best poised to connect with the Bolsanaro’s administration is not the Israeli government but, rather, the nascent Sanhedrin.

Rabbi Weiss emphasized that a pre-Third Temple connection to South America appears in prophecy as the first stage in establishing a Third Temple.

With ships of Tarshish in the lead, To bring your sons from afar, And their silver and gold as well — For the name of Hashem your God, For the Holy One of Yisrael, who has glorified you. Aliens shall rebuild your walls, Their kings shall wait upon you… Isaiah 60:9-10

Rabbi Weiss explained that Tarshish is Spain, or the Spanish speaking world.

“The first ones to come and recognize Jerusalem for the purposes of the Messiah and the Third Temple are the Spanish speakers,” Rabbi Weiss said. He noted that later in the chapter, the prophet referred to them in terms that seemed to describe the Spanish Inquisition.

Bowing before you, shall come The children of those who tormented you; Prostrate at the soles of your feet Shall be all those who reviled you; And you shall be called “City of Hashem, Tzion of the Holy One of Yisrael.” Isaiah 60:14

“The New World was opened up to Spain and Portugal as a result of the Inquisition by Christopher Columbus, who was a descendant of Anousim (Jews forcibly converted to Christianity),” Rabbi Weiss said. “This aid the descendants of the Inquisitors will give to build the Third Temple is their tshuva (repentance) for what they did during the Inquisition.”

The Sanhedrin is already working to bring about this final tikkun (fixing) to open the way for South America to take their place in building the Third Temple. In September, the Sanhedrin hosted the Creation Concert, inviting all the nations of the world to come and praise God in Jerusalem. As part of the concert, the Sanhedrin invited the nations to establish a new international body based on the Bible. On hand were representatives from Guatemala, Honduras, and Mexico who all signed a declaration of intent to play their prophetic role in helping Israel bring about the Third Temple.

This opened up relations between the Sanhedrin and those countries which are ongoing. Last month, the Sanhedrin sent a letter to Guatemala on the occasion of their national Independence Day, praising them for being the first nation to accept their prophetic role.

“We now pray that all of the lands in which Spanish and Portuguese are spoken will become connected with the return to Zion, the physical and spiritual repentance and return,” the letter read. “Among your people are those of our brethren, members of the Ten Lost Tribes of Jews who escaped the Inquisition and whose descendants live in your lands. Also the tribes that have undergone strict ritual conversion like an entire Peruvian tribe which immigrated to Israel and now live full Jewish lives in Judea and Samaria.”

These prophecies relate directly to you. They speak to you, of you, to show that you have been chosen as pioneers and groomsmen to this entire prophetic awakening.

“We offer our blessings for great success for your country in responding to this divine wish, and for a just and true peace among all of your peoples and your neighboring countries. We pray that you will make annual pilgrimages to Israel to celebrate the Feast of Tabernacles.”

“We call on you to establish an organization of states in Jerusalem, 70 states, that will administer justice and righteousness together with the Sanhedrin to fulfill the saying “from Zion will emerge the Torah, and the word of God from Jerusalem.”