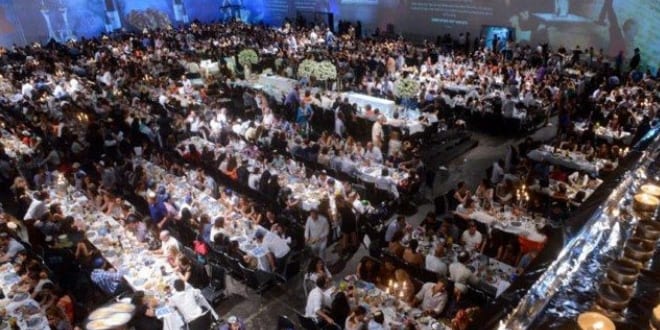 White City Shabbat (so named for the Bauhaus architectural legacy of the city), typically hosts many hundreds of young Jews from Israel and around the world for Shabbat and holiday meals each month.

On June 13th, 2014 they set the Guinness World Record for the largest shabbat dinner ever hosted, bringing together more than 3,000 people. Ever since, they have hosted a yearly mega-sized kosher meal in coordination with the global Shabbat Project – a unique, international grassroots movement that unites all Jews around the world to keep one full Shabbat together.

This year’s White City Shabbat hosted more than 1,000 young Tel Avivians at Hangar 11 at the Tel Aviv port, having already been told by the Shabbat Project international team that this meal will be the largest happening of its kind out of the tens of thousands Shabbat dinners happening simultaneously around the world this past Friday night. In all, more than 1,000 cities and 95 countries around the globe participated in this year’s Shabbat project.

The nonprofit organization has become the torchbearer for Jewish community life in Tel Aviv over the past decade. Founded by Jay Shultz, President of the Am Yisrael Foundation, the main mission of the initiative is “to remind Jews all over Israel and the globe that Tel Aviv is the center of the Jewish nation today and at its core,” Jay Shultz, President of the Am Yisrael Foundation, told Breaking Israel News. “This modern Hebrew metropolis has a vibrant spiritual role to play for the benefit of all humanity,” he said.

In addition, as Shultz maintained and Breaking Israel News previously reported, Israel’s high-tech capital is taking a prophetic role in bringing the Geula (Redemption). Shultz even goes so far as to call Tel Aviv Ir HaKodesh (the holy city), a term usually used for Jerusalem. He believes that Tel Aviv is the most practical city in which to create a vibrant community that attracts olim (immigrants), fulfilling the Biblical prophecy of kibbutz galuyot (ingathering of the exiles) required for the Geula.

The massive Shabbat meals, he said, will also bring a new prophetic era to Israel as a whole. “We hope that by this time next year we have the honor of hosting a Shabbat dinner in our Tel Aviv Ir HaKodesh for every young Jew that is currently not living in Israel,” he said. “There has never been an easier and more relevant time to be a Jew living in here, it’s time for us all to come home, especially to the holy white city.”

Shultz connected the importance of hospitality in achieving these goals to this week’s Torah portion, in which we read about Avraham’s great passion for hospitality, making hosting guests a foundational priority of his relationship with God.

“Clearly the dedication to bringing together Jews in unity and warmth under a modern, welcoming big tent has only intensified over the generations,” maintained Shultz. “I know that great, great grandpa Avraham and great, great grandma Sarah are looking down with tremendous amounts of love and nachas (pride) tonight.”

Until next year’s Shabbat Project, this past White City Shabbat dinner has certainly helped share the magic of Shabbat with its many guests, rejuvenating family and community life in Tel Aviv, restoring Jewish pride and identity and doing its part to build Jewish unity across the world.