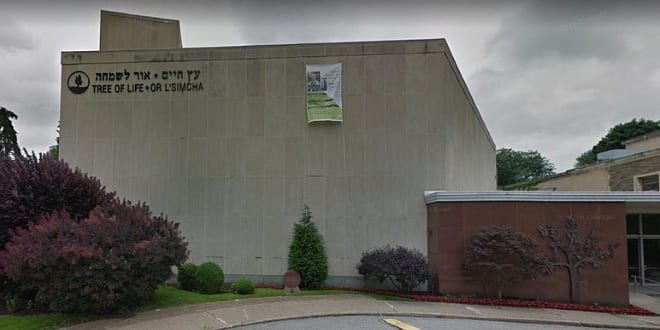 The Pittsburgh Jewish community is in mourning after a gunman killed 11 people and injured six others, including four responding officers, during a brit milah (“baby naming”) at The Tree of Life Synagogue in Squirrel Hill, a historic Jewish neighborhood in the area, as the synagogue was observing its weekly Shabbat services on Saturday.

According to Pittsburgh’s CBS affiliate KDKA, the suspect is 46-year-old Robert Bowers, who was apprehended at the scene of the shooting. Police sources told the news outlet that when Bowers walked into the synagogue, he allegedly yelled, “All Jews must die.”

“It’s a time of mourning,” Adam Hertzman, director of marketing at the Jewish Federation of Pittsburgh, told Fox News on Saturday night.

A Jewish resident, who requested anonymity for privacy reasons, told JNS: “I was about a mile from the synagogue, so all I can say is that I’ve never heard ambulance sirens like that in all my life, nonstop for probably an hour but what felt like more. The community here is devastated and has historically been an extremely peaceful and warm place.”

Jeff Finkelstein, CEO of the Jewish Federation of Greater Pittsburgh, said: “Today our city, which has ordinarily been among the most safe and secure in the nation, was rocked by horrible tragedy. My heart is broken, and I offer my condolences to the friends and family of those killed.”

“I hope and pray for healing for everyone affected and for all of us who are sickened by these recent events,” continued Finkelstein. “We are truly all family in the Pittsburgh Jewish community, so these deaths have affected me and all of us as would a death in the family.”

“Many synagogues share the sacred space where this tragedy occurred, including the combined Tree of Life*Or L’Simcha Congregation, a Conservative congregation, and Dor Hadash, a Reconstructionist congregation,” added Finkelstein. “An attack of any kind—and especially an attack on a place of worship—is despicable. Violence has no place in our society or in our community.”

Stosh Cotler, CEO of Bend the Arc: Jewish Action, a progressive Jewish group, said: “We are overcome with grief and heartbreak at the unconscionable act of terror during morning prayers at the Tree of Life Synagogue in Pittsburgh today.”

“We are sending our condolences, our love, our strength and our support to the victims, their families, the entire Pittsburgh Jewish community, and all who are in tears. May the memories of those murdered be a blessing.”

“No words are adequate,” said David Harris, executive director of the American Jewish Committee. “A demented, bigoted mind that would destroy lives in a house of worship should leave us all speechless, united and angry as hell.”

‘Another example of the danger of anti-Semitism’

In addition to giving condolences, Jack Rosen, president of the American Jewish Congress, remarked that the shooting is a reminder of the hatred that persists against Jews.

“The American Jewish Congress strongly condemns the acts of terrorism and hate against our community,” said Rosen. “Attacking innocent civilians in their place of worship, when they are congregating to practice their faith, is a cowardly and dreadful crime of hate. During these terrible times, we stand even stronger against anti-Semitism, white supremacy and intimidation.”

“This horrific attack is yet another example of the danger of anti-Semitism. “This baseless hatred is the mother of the violence we saw today and have witnessed throughout Jewish history,” said David Brog, Executive Director of the Maccabee Task Force, a pro-Israel campus group.

“We must have zero tolerance for anti-Semitic speech and anti-Semitic acts whether they target individual Jews or the Jewish state,” continued Brog. “We must respond to every anti-Semitic outburst in our communities and on our campuses as if lives are at stake. They clearly are.”

“We are devastated. Jews targeted on Shabbat morning at synagogue, a holy place of worship, is unconscionable,” tweeted Anti-Defamation League CEO Jonathan Greenblatt. “Our hearts break for the victims, their families, and the entire Jewish community.”

“It is simply unconscionable for Jews to be targeted during worship on a Sabbath morning, and unthinkable that it would happen in the United States of America in this day and age,” said Greenblatt in a statement. “Unfortunately, this violent attack – the deadliest anti-Semitic attack in the United States since 2014 – occurs at time when ADL has reported a historic increase in both anti-Semitic incidents and anti-Semitic online harassment.”

President Donald Trump also decried the hatred behind the shooting.

“This evil anti-Semitic attack is an assault on humanity,” tweeted the president. “It will take all of us working together to extract the poison of anti-Semitism from our world. We must unite to conquer hate.”

The president’s daughter Ivanka Trump, who is Jewish, posted on Twitter: “America is stronger than the acts of a depraved bigot and anti-Semite. All good Americans stand with the Jewish people to oppose acts of terror & share the horror, disgust & outrage over the massacre in Pittsburgh. We must unite against hatred & evil.”

“Our Jewish brothers and sisters are hugging their children close in anguish as they try to grapple with this evil,” he said in a video. “Every Jewish mother and father in America faces the daunting task of telling their sons and daughters there are some in this country who want to kill them because they are Jewish. It is an unthinkable pain and an intolerable reality.”

Hagee added, “Now is the time to pray for our friends, to reach out personally with words of comfort and love, and to visibly stand with them against the anti-Semitic poison that fueled this attack.”