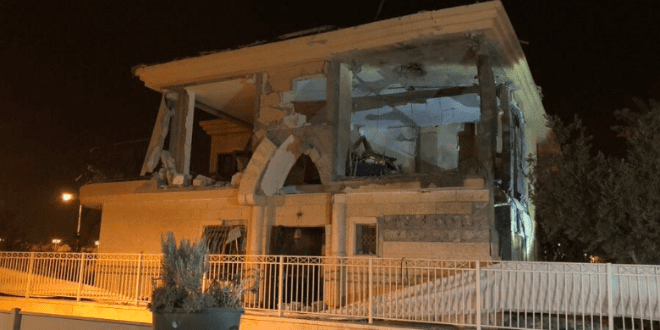 Israel and the Hamas-run Gaza strip are about as close to outright war as they have been since the cessation of 2014’s Operation Protective Edge.

Tensions have been high for several weeks, but the temperature was raised significantly earlier today following the launch of two rockets just before 3:40 a.m., including a long-range missile, fired at Israel.

One of the rockets scored a direct hit and destroyed a home in Beersheba, often referred to as the capital of the Negev. No injuries were reported as the family – a mother and three children – had managed to escape to the bomb shelter prior to the strike.

Miri Goldstein, whose house was hit by a rocket last night in Beersheba, asks for help from the public.

“I have no home, the memories have gone, nothing is left, every child is a whole world, now the children have nothing, I do not have the basics, I do not have a bed,” she said.

The second, which the Israeli military has claimed was a long-range rocket, fell into the sea not far from the Tel Aviv coast. Both Hamas and Palestinian Islamic Jihad denied firing the rocket, but they are thought to be the only two groups with such weaponry in their arsenals. Despite the protestations, the IDF’s response was unequivocal – both in words and actions.

“Hamas is responsible for all that is carried out in the Gaza Strip and it will bear the consequences. There is a direct connection between the atmosphere of violence and terror that Hamas creates with terrorist operations during the day and the attacks during the night,” an IDF statement said. “We are prepared for a variety of scenarios and are determined to continue to carry out its mission to protect Israeli citizens.”

In response to the attacks, the Israel Air Force launched a number of raids on the enclave,  hitting more than 20 terrorist targets, including production sites of aerial weapons and rockets. The Israeli military also reported that the IDF had destroyed another cross-border attack tunnel in the southern part of Gaza – the second in as many weeks.

Israel’s Prime Minister Benjamin Netanyahu convened a security cabinet meeting to discuss the increasing unrest and escalation of violence. Also present were Defense Minister Avigdor Lieberman, the heads of the National Security Council and Shin Bet and the Deputy Chief of Staff.

Palestinian media reports also said that an Egyptian Intelligence Delegation in Gaza has been holding talks with the leaders of various Gaza factions on Wednesday morning, to try and prevent further rocket fire.

Egypt is currently attempting to deal with Islamic State fighters in its Sinai region and would clearly not appreciate a war between Israel and Hamas.

Israeli Air Force conducted a hot interception as #Gaza terrorists tried to launch an attack against Israel. It didn’t end well for the terrorists. pic.twitter.com/zQl4ksl167