Did Archaeologists Find First Ever Evidence of Biblical Exodus?

Home » Did Archaeologists Find First Ever Evidence of Biblical Exodus? 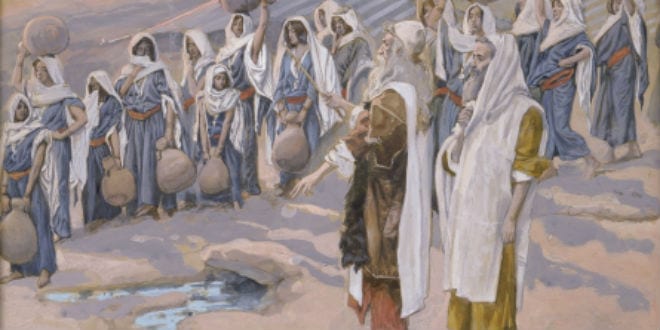 Archaeologists have long disputed whether the Exodus described in the Bible was a factual, historical account of the Jews’ arrival from Egypt or whether the evidence points toward a non-Biblical version – an internal social development in the region. A recent discovery that may prove Iron Age nomads dwelt in the Jordan Valley may bring researchers one step closer to determining the truth.

In an article published in the Biblical Archaeology Review, David Ben-Shlomo, an archaeologist with Ariel University and his American dig partner, Ralph Hawkins of Averett University, described their findings at Khirbet el Mastarah, five miles north of Jericho.

“By the end of our 2017 season, we were struck by the fascinating picture that had begun to emerge in the Jordan Valley, a region that up until recently had been virtually unknown archaeologically,” they wrote. “Within a range of just a couple of miles, we may be able to see the evolution of early Israel from a domestic-scale culture to a political-scale culture.”

The site contains ruins of low walls that researchers believe were used to fence in grazing animals. Pottery shards found at the site have been dated to the early Iron Age, around the time traditionally associated with the Israelite arrival in the Promised Land. No shards were found inside the stone fencing, leading researchers to believe that the people lived in tents.

“The floors of the structures were virtually empty of finds, and thus, we could not date them by conventional archaeological methods,” Ben-Shlomo wrote. “In Bedouin settlements, people live in tents made of perishables which are relocated every season, thus artifacts would not be associated with stone architecture. So the structures might have housed animals, rather than people, who lived in tents around them.”

The theory that the many low stone enclosures discovered in the region were the campsites of the Israelites when they first entered the land was first put forth by Professor Adam Zertal of Haifa University, who surveyed the area for 38 seasons until his death in 2015. This theory has been contested by archaeologists who claim the rise of the early Israelites was an internal development and not a foreign invasion.

Ben Shlomo and Hawkins believe the people who built the fences were nomadic, just passing through the area due to the harsh climate. Temperatures frequently exceed 110 degrees Fahrenheit and the area receives an average of less than half of an inch of rain annually. The site is enigmatic. Semi-concealed by the topography, it is located one mile from the nearest spring.

“The landscape is arid most of the time and even in modern times, most of the population here are Bedouins,” said Dr. Ben-Shlomo. “Sites like Khirbet el Mastarah and other similar ones in the Jordan Valley seem – at least from survey material – to appear suddenly during the Iron Age. Since this area is not densely populated in many periods, this might indicate a new phenomenon like nomads suddenly creating settlements, or a new population.”

Soil from the site is currently undergoing analysis in a laboratory. Samples from underneath the walls are being tested for a build-up of electrons, which become trapped over the years and are only released by light radiation. Samples from the walls are being tested for elevated levels of phosphorus, which would be consistent with animal dung accumulation.

“It is difficult since many aspects of the material culture of different groups (say those from east or west of the Jordan River) may be too similar or not indicative enough,” said Dr. Ben-Shlomo.

“The story of Exodus is a matter of religious belief, yet, some parts of it may be, in principal, inspired from historical events,” Dr. Ben-Shlomo told Breaking Israel News. “The appearance of new sites in the Jordan Valley that may be dated to the early Iron Age (1200-1000 BCE), as suggested by Adam Zertal according to his survey, may fit a situation where there is a movement of some population from east of the Jordan River to west of it. This is possibly a part of the Exodus story.”

Dr. Ben Shlomo added a disclaimer to his statement.

“So far the finds themselves from Khirbet Mastarah do not support this since we have not yet dated the construction of the structures there; finds from other excavations in the Jordan valley are slightly more informative, but we still need more data.”

The role of the Bible in Israeli archaeology is a source of fierce debate among researchers. As head of the Sifting Project, Dr. Gabriel Barkay is elbow-deep in Second Temple artifacts. When asked how he approaches the Bible in the context of archaeology, Dr. Barkay answered simply, “Very carefully.”

“The Bible is not, nor was it intended to be, an auxiliary reference book for archaeologists and historians,” Dr. Barkay told Breaking Israel News. “The Bible is a religious work that has within it historical data, some of it reliable, some of it mythical, some of it legendary. People, especially researchers, have to be very careful when referencing the Bible. Each verse needs to be weighed for its own relevance.”

Dr. Barkay noted that this ‘careful’ approach to the Bible is especially true when dealing with the significantly more ancient period of early Israel.

“There are some archaeologists who claim that the Exodus from Egypt never took place while other archaeologist believe that it did. Those who do, generally place the date around the 13th century BCE, which, in the ancient Near East, corresponds to the Iron Age,” Dr. Barkay said.

“There is some circumstantial evidence that the Exodus did take place but there has yet to be any direct evidence,” Dr. Barkay said. “This find is circumstantial.”

“So even if the researchers at Khirbet el Mastarah prove that the remains were from the 13th century BCE, it would not be proof of a Biblical Exodus. Proof would be in the form of an Egyptian inscription describing a slave revolt or if we found the remains of an Egyptian army in the sea,” he said.

Dr. Ben Shlomo and Hawkins are determined to continue their search for definitive proof to settle this archaeological debate. Towards this end, they will be continuing their research next season Auja el-Foqa, located south of Khirbet Mastarah. The project is currently organizing volunteers for the dig.