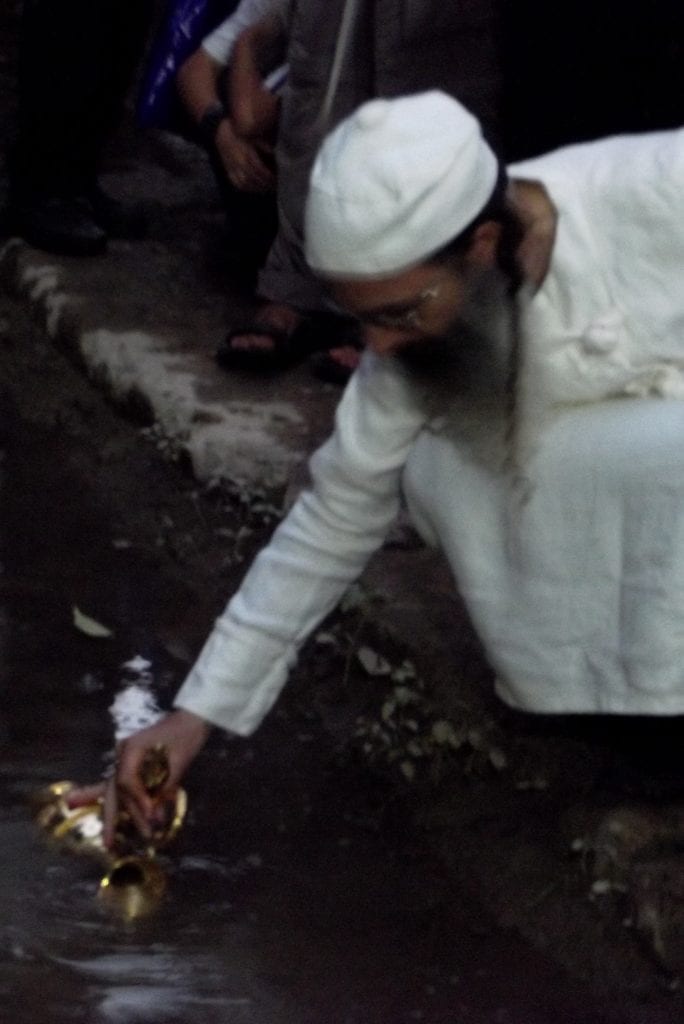 On Thursday, a bit of the former glory of the Temple was witnessed by three hundred people who took part in the full-dress reenactment of the Sukkot water-libation ceremony.

The group set out from the Dung Gate in the Old City of Jerusalem in the early evening, making its way down the steep steps leading to the Shiloah Spring. Led by six Kohanim (Jewish men descended from Aaron the Priest) and accompanied by music, the crowd sang and danced as they passed from the archaeological remains of the ancient City of David, through an Arab village, to the spring which was used in Temple times.

The Kohanim wore vestments that were made according to Biblical standards for use in the Temple and several played long silver trumpets that had been prepared by the Temple Institute for use in the Third Temple. One Kohen carried a silver vessel used for the libation while the High Priest carried a spectacular gold vessel prepared this year for this year’s service.

“A vessel like this has not been seen since the Temples stood,” Rabbi Hillel Weiss, spokesman for the Sanhedrin and an organizer of the event, told Breaking Israel News.

The procession then climbed to a plaza overlooking the valley, where a model altar had been constructed of wood. The ceremony, carried out precisely as it was performed in the Temple, took place closer to the Temple Mount than any other Temple reenactment thus far. An equal amount of water and wine were poured into two separate containers. The two liquids then spilled out onto the altar through openings in the containers.

The reenactment altar was decorated with large branches from a willow tree to replicate how the altar in the Temple was decorated for the holiday.

This was followed by the Priestly Blessing.

In Temple times, a libation of water was made together with the pouring out of wine at the morning service on the last six days of the week-long Sukkot holiday.

Though not explicitly mandated in the Torah, the water libation is part of the oral tradition passed down from Moses. Sukkot is a joyous holiday and the water libation was the focal point of this joy. In the Temple, the ceremony would take fifteen hours with accompanying celebrations lasting all night until the Temple service began again the next morning.

“The basis of Sukkot is universal, bringing bounty to all 70 nations, as symbolized by the 70 bulls brought as sacrifices throughout the festival,” Rabbi Weiss said. “The world is facing many universal threats and coming together is vital. The Temple was a way in which the nations could come together in holiness, each nation bringing their aspect of holiness and connection with Hashem in order to avert these universal threats.”

“This must necessarily be done from a Biblical basis and from Jerusalem,” Rabbi Weiss said, citing a verse from the Prophets.

The United Nations imitated this by establishing Israel as one of their first acts but they have strayed since then, the most egregious act being their attacks on Jerusalem which were attempts to delay the building of the Third Temple. President Trump clearly recognizes this and has called on the UN to either fix themselves or to disband.”

At the ceremony Rabbi Azriel Ariel announced the birth of the red heifer.

“This is the beginning of a long process that will, God willing, allow us to purify all of Israel, Rabbi Ariel said. “This is not us forcing God’s hand. We are simply performing mitzvoth (Torah commandments) as given to us in the Torah.”

He explained that the actual preparation of the ashes will be in two years. Until that time, it is considered an egla (calf) by Jewish law. At the age of two, it becomes classified a para  (heifer) and can be sacrificed and burned, it’s ashes used in the purification ritual.

In the meantime, the rabbis will be studying the relevant laws and the Kohanim will be preparing for the ritual.