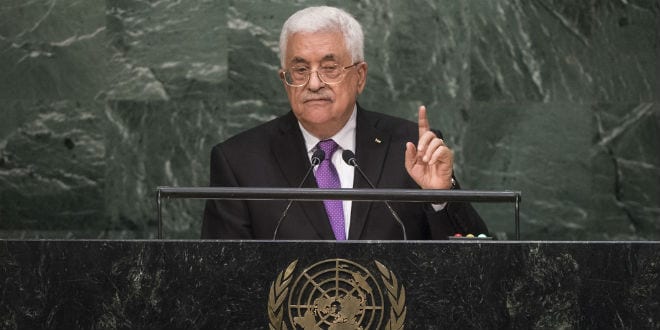 Palestinian Media Watch (PMW), an Israeli research institute that monitors Palestinian society, sent a letter to Secretary of State Mike Pompeo requesting that he not permit Palestinian Authority (PA) President Mahmoud Abbas to enter the U.S. for an upcoming United Nations General Assembly meeting in New York City due to his funding of terrorism.

“The Taylor Force Act, which passed the US Congress and was signed into law by Pres. Trump, declares that paying salaries to terrorist prisoners and martyrs’ families is an ‘incentive to commit acts of terror,’” the letter from PMW read. The Palestinian Authority, through the Palestine National Fund, makes these terror promoting payments. Mahmoud Abbas is the head of the Palestine National Fund. The recipients of these payments include murderers of US citizens and members of US designated terrorist organizations.”

The Taylor Force Act, named for an American tourist and U.S Army Veteran who was stabbed to death by a Palestinian in 2016, was passed in March, halting payments to the PA until terrorist salaries are abolished.

The PMW letter was dated September 13, three days before a Palestinian terrorist stabbed to death Ari Fuld, an American-Israeli citizen.

“Abbas has also called for the “destruction of the house” of President Trump, and uses almost every opportunity to attack the US, the current administration and its policies,” the letter continued. “There is no doubt Abbas will use his UN address to continue these attacks.”

A State Department spokesperson told the Washington Free Beacon that, in most situations, foreign nationals must be admitted to the United States due to its role as the U.N.’s host nation.

“I can’t speak to the specifics, but typically, as host nation for the United Nations, the United States is generally obligated to admit foreign nationals traveling to U.N. Headquarters in New York for official U.N. business,” the official said.

The PMW letter preemptively related to this issue.

“The State Department’s response is alarming because allowing Mahmoud Abbas into the U.S. is in direct violation of the letter and spirit of U.S. law,” Itamar Marcus, director of PMW, told the Free Beacon. “U.S. law is very clear on protecting its borders from terrorists and includes prohibiting entry to those involved in terror[ism].”

The PA has boycotted the U.S., refusing to meet with any officials since President Trump recognized Jerusalem as Israel’s capital in December. Earlier this month, the U.S. State Department closed the Palestinian Liberation Organization’s mission in Washington for bringing charges against Israel in the International Criminal Court in the Hague in contravention of U.S. law.

In an effort to offset U.S. reticence to support the PA until they desist from supporting terrorists, Abbas stopped off in Paris on Friday to meet with French President Emmanuel Macron. While in Paris, Abbas also met up with Ehud Olmert who served as Israel’s Prime Minister from 2006-2009. During his term in office, Olmert made the most generous offer ever made to Palestinian leader for peace, offering to share Jerusalem as capital while turning over the holy sites to an international authority. Olmert also agreed to allow several million descendants of Palestinian refugees to settle in Israel.

“Ehud Olmert’s meeting with Abbas would have been considered a federal crime in the United States for which he would have been sentenced to at least 10 years in prison,” Oren claimed.

After losing the election in 2009, Olmert was sentenced to serve a 16-month prison term over convictions for accepting bribes and for obstruction of justice during his terms as mayor of Jerusalem and as trade minister.