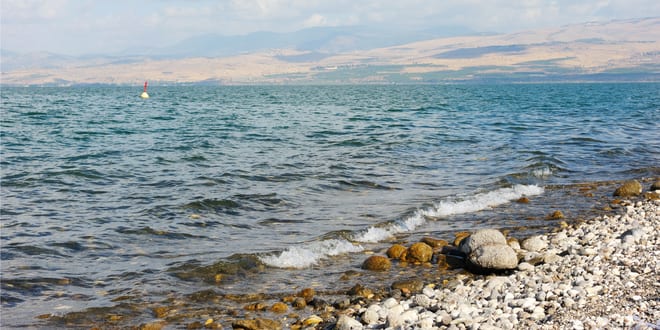 The Holy Land has had five years in a row of drought. While a bit more rainfall is predicted by meteorologists this winter – rain does not fall here in the late spring or summer – the deficit has put the Sea of Galilee in its worst condition in hundreds of years, if not more.

Israel, without the Sea of Galilee, would not be the same. Known to Israelis as the Kinneret (for its harp shape, as kinor is the Hebrew word for the musical instrument that was made famous by King David), it is the lowest freshwater lake on Earth and the second-lowest lake in the world (after the Dead Sea, which is composed of salt water).

Israel’s northern lake is expected to soon reach the “black line” that marks a dangerous level of salts and other matter not good for consumption. At -214.87 meters, the black line is the lowest-ever level reached since 1926 when the water level record began. Small islands have suddenly appeared in the lake, and guests at hotels that used to be on its shores now have to walk quite a distance to reach the beaches.

The beautiful Sea of Galilee not only supplies essential drinking water to many Israelis and has great ecological value, but it is of great religious importance to both Jews and Christians.

Scientists have argued what is to blame for the low level of the lake. Now, researchers at Ben-Gurion University of the Negev in Beersheba have concluded that human activity, rather than global warming and drought, is the main culprit for its historically low water levels.

In a major paper published in the September issue of Science of the Total Environment – a prominent industry journal – Prof. Jonathan Laronne and Fulbright post-doctoral Fellow Dr. Michael Wine of BGU’s geomorphology and fluvial research group present evidence that agriculture and diversion of flow into the Kinneret low diversion are the main causes of its shrinkage.

The researchers said that while numerous influences have caused lakes on all inhabited continents to shrink, the decline of Israel’s only freshwater lake is more extensive than can be explained by weather factors alone.

“Climatic factors alone are inadequate to explain the record shrinkage of the Sea of Galilee,” they said. “We found no decreasing trends in inflow from the headwaters of the Upper Jordan River located primarily in Lebanon and northern Israel.

“Rather, the decrease in discharge of the upper Jordan River corresponded to a period of expanding irrigated agriculture, doubling of groundwater pumping rates within the basin and increasing of the area of standing and impounded waters. While rising temperatures in the basin are statistically significant and may increase evapotranspiration, these temperature changes are too small to explain the magnitude of observed streamflow decreases. The results demonstrate that restoring the level of the Sea of Galilee will require reductions in groundwater pumping, surface water diversions and water consumption by irrigated agriculture,” they added.

This new research is based on several lines of evidence: trends in streamflow, precipitation and satellite-based estimates of agricultural water use. They found that there has been little change in the use of water in the headwaters located in Lebanon, but there have been large decreases in the flow of streams within Israel’s Hula Valley.

To deal with the shrinkage, Israeli water authorities have suggested a $1.3 billion project to pump desalinated water from the Mediterranean Sea to the Sea of Galilee. However, the estimated cost of the project would be approximately $120 million per year just to keep pace with the current evaporation and will do nothing to raise the level back to normal.

The Kinneret, about 53 kilometers (33 miles) in circumference, 21 km (13 miles) long, and 13 km (8.1 miles) wide has covered 166.7 square kilometers (64.4 square miles) at its fullest, and its maximum depth was about 43 meters (141 feet). The lake is fed partly by underground springs, although its main source is the Jordan River, which flows through it from north to south.

When Israel and Jordan signed a peace treaty in 1994, Israel agreed to provide its former enemy – which does not have access to the Mediterranean and thus, unlike Israel, cannot desalinate its water – with 50,000,000 cubic meters (1.8×109 cubic feet) of water annually from the lake to Jordan.

In countries with too little water, they wrote, population growth and climate change threaten to dry up lakes. As they disappear, water managers have often blamed climate change-induced decreases in rainfall and evaporation due to higher temperatures, which man cannot control, while simultaneously constructing dams and drilling new wells into aquifers to permit agricultural expansion.

But the Beersheba scientists managed to show that the lake’s level would nevertheless be stable, even in the face of decreasing precipitation in the Golan Heights. Climatic factors alone, they insist, are inadequate to explain the record shrinkage of the Sea of Galilee.

The results demonstrate that restoring the level of the Sea of Galilee will require reductions in groundwater pumping, surface water diversions and water consumption by irrigated agriculture. Just looking at what has happened to the Dead Sea in recent decades; its rapid retreat due to evaporation and numerous sinkholes around it should have been enough to prepare the Israeli authorities for the sad scenario in the Kinneret up north.

The Beersheba researchers concluded that conserving the Sea of Galilee would be feasible if the Israeli authorities “gave greater weight to its inherent value as a source of water security in the face of great climate uncertainty, an aquatic ecosystem, a site of recreation, a location of religious significance and a source of tourism income” – above economic interests that favor maximizing water consumption.