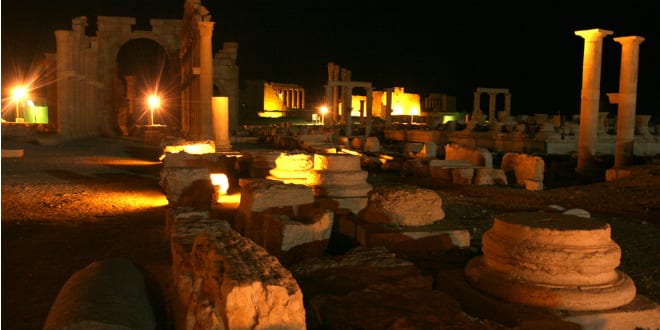 The reproduction of the Arch of Palmyra, a Roman victory arch that stood as the entrance to a pagan temple for almost 2,000 years, will make an improbable appearance in Washington D.C. and the International Criminal Court in the Hague as a “symbol of Peace and Resilience.”

The original Roman victory arch was built in Palmyra, Syria at the end of the second century CE. Originally it stood in front of the Temple of Bel where pagans worshiped the Mesopotamian god, also known as Ba’al, in a form of idol worship that figures prominently in the Bible. The temple was dedicated in 32 CE but was constructed on the site of a pre-existing temple that goes back to the third millennium BCE.

The Temple of Bel, along with many other pagan places of worship in the area, was converted into a Catholic church during the Byzantine Era. Parts of the structure were modified by Arabs in 1132 who preserved the edifice and converted the Temple into a mosque

The original arch was destroyed by the Islamic State (ISIS) in October 2015, but one year later, the Institute for Digital Archaeology (IDA) used 3-D printing technology to reproduce a 20-foot  full-scale replica.

The IDA‘s internet announcement of the exhibit describes the reproduction of the arch as their “flagship exhibit,” the replica of the Roman Triumphal Arch of Palmyra, will be displayed in Washington D.C. from September 26-30.

The replica arch will then be reassembled in the Hague, the site of the Dutch Parliament and the UN’s International Criminal Court. The Hague is described as  the City of Peace and Justice.” Hosted by the Centre for Global Heritage and Development, the arch will be displayed adjacent to the ICC for one month beginning October 17. The Internet announcement of the exhibit describes the arch, a replica of the victory of Roman paganism, as “a symbol of cultural resilience” that will stand as an inspiration to the Netherland’s approximately 100,000 Syrian immigrants.

“The Centre for Global Heritage and Development together with the Institute for Digital Archaeology organize an event called Heritage for the Future. The core of this event is the majestic triumphal arch of the ancient city of Palmyra in Syria, an iconic piece of reconstructed cultural heritage symbolizing cultural resilience, according to the statement.”

“Once, in the first centuries of our era, nearby Forum Hadriani (now in municipality Leidschendam-Voorburg) was part of the same empire as Palmyra: the Roman empire. While in some countries in Europe’s gates are closing for migrants, the Palmyra arch is an open gate, offering the opportunity to pass through and look to the future. The arch will now function as a meeting point for Syrian migrants and expats and the Dutch community. Matchmaking events in a tent next to the arch will stimulate encounters between the Syrian workforce and employers, while a range of cultural events will offer the opportunity for anyone to experience the rich cultural heritage of Syria and the Middle East.”

Also known as May Day, Beltane is an Anglicized reference to the god “Ba’al.”  An annual Beltane Fire Festival is held in Edinburgh and in other parts around the globe as part of ancient Gaelic culture. In an unfortunate misunderstanding of the festival’s roots, they are frequently billed as family events, with children being given special discounts.

Rabbi Yosef Berger, the rabbi of King David’s Tomb on Mount Zion, sees the reconstructed arch as a pre-Messiah resurgence of idolatry.

“As the Messiah approaches, the forces of darkness are pushing back harder than ever before, Rabbi Berger told Breaking Israel News. “The last time we saw this level of idolatry was when the Temple stood in Jerusalem. Now that we are close to the appearance of the Third Temple, idolatry is reappearing, even in popular culture among people who claim they are atheists.”

The arch then reappeared in several venues hosting world government summits. It was erected to inaugurate the World Government Summit in Dubai in February 2017, an event that brings together leaders in business, technology, and politics from around the world. The arch was then erected in Italy in May 2017 for the G7 Summit, a meeting of the leaders of the seven largest economies in the world representing more than 64 percent of the net global wealth.

The rabbi explained that it is no coincidence that the arch is becoming a centerpiece at gatherings of world leaders.

“This is like a child who builds a Lego tower that gets knocked down,” Rabbi Berger explained. “After having it knocked down several times, he goes to build the Lego tower next to his mother so that she will stop it from being knocked down. An average person, Jew or non-Jew, has no tolerance for open idolatry. If someone built an altar to idolatry in the middle of a nice neighborhood, everyone would gather together to destroy it.  The average person has no desire for idolatry. So the people who seek dark and unholy power build their symbols of idolatry next to powerful politicians, at these world power summits, so that normal people will not be able to challenge them.”

The IDA and UNESCO have paired up in other projects presenting symbols of idolatry. In November 2017, a statue of the pagan goddess Athena was reconstructed by the IDA and presented at an exhibit “The Spirit in the Stone,” at the United Nations’ headquarters in New York City. The exhibit described Athena as “synonymous with reason, refuge and the rule of law, all of the same values on which that historic institution was built,” but the spear lying at the statue’s feet belied her more common association as the goddess of war. Some scholars believe the Greek goddess was based on the Mesopotamian goddess al-Lat.

Rabbi Shimon Apisdorf, a Jewish educator and best-selling author, noted that in their efforts to preserve the past, the IDA and UNESCO are doing precisely the opposite.

“The organization claims this is about cultural resilience but everything about this points to cultural dominance and the crushing of culture,” Rabbi Apisdorf told Breaking Israel News. “It would be nice to think of Athena as the goddess of tolerance but the people who worshipped her believed she was the goddess of war.”

“History is to be learned from but it must be in an objective manner. History is real and separate from us. The people who lived then were as real as we are today but they had their own reality and their own world. That is why we can learn from history, learn to incorporate their victories as well as avoiding their failures. If we superimpose our thoughts and our reality on the past, we are acting as the Roman conqueror, erasing the culture of the past.”

“Creating history in your own image, creating a subjective self-based reality, is the very definition of idolatry. A belief in God is a belief in an external creator, an objective absolute reality.”

In Jewish tradition, the Arch of Palmyra may be alluded to as a harbinger of the Messianic era.  An arch that is repeatedly built up and destroyed is described in the Talmud (Tractate Sanhedrin 78a).

Rabbi Shlomo Yitzchaki, a prememinent medieval rabbi known by the acronym Rashi, explained this section of the Talmud, stating that the arch described by Rabbi Yossi was “a Roman arch in a Roman city.” The arch in Palmyra was indeed a Roman victory arch built when Palmyra was a Roman city.

Palmyra was listed as a world heritage site by UNESCO in 1980, which described the temple as “one of the best preserved and most important religious edifices of the first century in the Middle East.” Palmyra is approximately 370 miles away from two other UNESCO Heritage sites listed as having Muslim significance: Jerusalem and Hebron.

Before the outbreak the Syrian Civil War in 2011, Palmyra was a popular tourist attraction, drawing 105,000 visitors a year. With the help of a powerful Russian military presence in Syria, President Bashar al-Assad has retaken control of Palmyra and reconstruction is underway. The Syrian government recently announced that the site will be ready to receive tourists by summer 2019, but it is not exactly clear where they will come from.