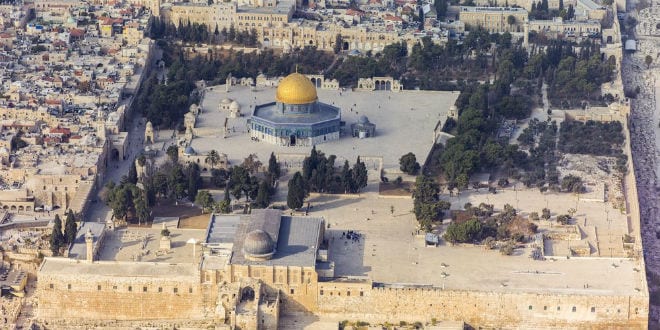 The joy of Rosh Hashanah will be lessened this year as Jews will be prohibited from entering their holy sites, forced to stand outside and peer in as Muslims celebrate their own holidays.

Rosh Hashanah begins Sunday evening and ends Tuesday evening. The second day of the Jewish holiday coincides with the Arabic Hijri New Year. Though not considered a major Muslim holiday, the Israel Police has decided that Hijri takes precedence over the Jewish holiday and have closed the Temple Mount to Jews.

Elishama Sandman, spokesman for the Temple Mount activist organization Yera’eh, warned that this inequality of prayer is standard operating procedure and is scheduled to occur several more times this year, when it can be expected that Jews will be locked out on holidays.

“This situation will only get worse,” Sandman warned in an interview with Breaking Israel News. “Jerusalem Day [in 2019] is going to be during the last ten days of Ramadan when Jews are prohibited from entering the Temple Mount. There is also a question whether the Temple Mount will be open to Jews on the Ninth of Av. We are negotiating with the police now to maintain the rights of the Jews on several of the upcoming holidays. As the situation stands now, if there is any issue concerning a Muslim holiday, even if a Jewish holiday falls at the same time, the rule is that the Temple Mount Is closed to Jews.”

Sandman has experienced this inequality of prayer in previous years.

“Last year, the Temple Mount was closed to Jews on the second day of Rosh Hashanah,” he said. “This is disgraceful since when all things are equal, the Muslim holiday is respected and the Jewish holiday is negated. For Jews, of course, Rosh Hashanah is a big deal and many Jews go to the Temple Mount. On Hijri, a few more Muslims show up but not so many.”

Despite the injustice, Sandman was optimistic that the situation would improve on the Temple Mount.

“You should see it this way. This year has been a major step forward toward the Third Temple,” Sandman said. “Up to this point, 28,500 Jews have gone up to the Temple Mount. We expect many more people in the next week during the Ten Days of Repentance between Rosh Hashanah and Yom Kippur. In comparison, four years ago fewer than 10,000 Jews went up to the Temple Mount in the entire year.”

“As more Jews ascend to the Temple Mount, it can be hoped that the police will take that into consideration before deciding to close it to Jews,” Sandman said. “As more Jews go up, there will be no choice but to give us equal rights.”

This bias against Jewish prayers occurs at other Jewish holy sites. At the Cave of the Patriarchs, Jews have slightly more rights than on the Temple Mount but the situation is still grievous. Elimelech Karzan, the supervisor of the site, described how it is handled at the site that Abraham purchased for his descendants.

“It is indeed a disgraceful situation,” Karzan told Breaking Israel News. “On a daily basis, the site is divided equally between Jews and Muslims. Ten days are set aside in which only Jews pray at the site and it is opened up entirely for Jewish prayer. The same is true for the ten days the site is set aside entirely for Muslim prayer.”

“On a normal year, the two days of Rosh Hashanah are counted as part of the ten days that we are given exclusive use of the site. This year, because of the Muslim holiday, the second day of Rosh Hashanah will be like a normal weekday; equally divided between Jewish prayer and Muslim prayer. This is very difficult since there are thousands of Jews who come to pray at the Machpela (Cave of the Patriarchs) for Rosh Hashanah. In these situations, many Jews are forced to pray outside. Since this is not a major holiday, there are usually not so many Muslims who come to pray on Hijri.”