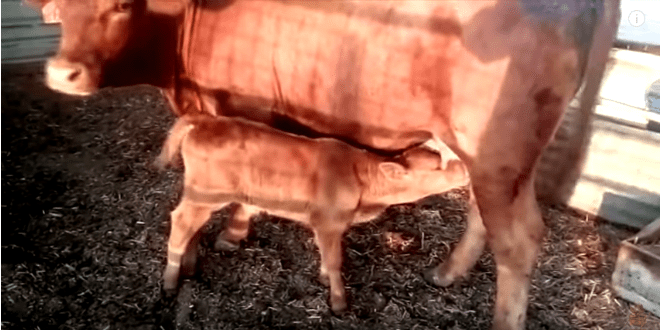 Last Tuesday, the Temple Institute’s Red Heifer program was blessed with results; an entirely red female calf was born, paving the way for re-establishing the Temple service and marking the final stage of redemption.

Almost three years ago the Temple Institute inaugurated its Raise a Red Heifer in Israel program. Due to laws restricting the importation of live cattle into Israel, the Temple Institute imported frozen embryos of red angus, implanting them in Israeli domestic cows. The pregnant cows were raised on cattle ranches in different locations throughout the country. The cows are giving birth this summer with several calves already having been born.

One week after it’s birth, the newborn red heifer was certified by a board of rabbis as fulfilling all the Biblical requirements. The rabbis emphasized that the heifer could, at any time, acquire a blemish rendering it unsuitable. They will be inspecting the calf periodically to verify its condition.

The red heifer was the main component in the Biblically mandated process of ritual purification for impurity that results from proximity or contact with a dead body.  Because the elements needed for this ceremony have been lacking since the destruction of the Second Temple, all Jews today are considered ritually impure, thereby preventing the return of the Temple service.

The red heifer is described in the Book of Numbers.

“This is the ritual law that Hashem has commanded: Instruct B’nei Yisrael to bring you a red cow without blemish, in which there is no defect and on which no yoke has been laid. Numbers 19:2

Several heifers have been found in recent years that seemed to qualify but ultimately were unsuited for the ritual. Earlier this month, two calves born in Israel to the Institute’s red heifer program were deemed to be unsuitable for the performance of the mitzvah. One calf was a bull while the second, a heifer, had a small patch of white hair which disqualified her.

The heifer, born from a natural birth, must be entirely red, with no more than two non-red hairs on its body. It must also never have been used for any labor or have been impregnated. The existence of such a heifer is considered a biological anomaly and very rare. Fortunately, the ritual requires an infinitesimally small quantity of ashes. From the time of Moses, who personally prepared the first heifer, until the destruction of the Temple, only nine red heifers were prepared. Nonetheless, this was sufficient to maintain the ritual purity of the entire nation for almost 2,000 years.

According to Jewish tradition, there will only be ten red heifers in human history with the tenth heifer ushering in the Messianic era. Rabbi Moshe ben Maimon (Maimonides), the most renowned medieval Jewish scholar known by the acronym Rambam, wrote in his explanation of the mitzvah that “the tenth red heifer will be accomplished by the king, the Messiah; may he be revealed speedily, Amen, May it be God’s will.”

Rabbi Chaim Richman, the International Director of the Temple Institute, commented on this on the institute’s website.

“If there has been no red heifer for the past 2,000 years, perhaps it is because the time was not right; Israel was far from being ready. But now… what could it mean for the times we live in, to have the means for purification so close at hand? With the words of Maimonides in mind, we cannot help but wonder and pray: If there are now red heifers… is ours the era that will need them?”

The laws pertaining to the mitzvah are myriad and considered by the sages to be the archetypal chok, an inexplicable Torah commandment accepted solely on faith. Before entering the land of Israel after the Exodus, the heifer was burned outside of the camp. In the days of the Temple, the heifer was taken to the Mount of Olives across a causeway built specifically for this purpose to ensure that there was no inadvertent contact with areas along the way that may have been contaminated by dead bodies.

Cedarwood, hyssop, and wool or yarn dyed scarlet are added to the fire, and the remaining ashes are placed in a vessel containing spring water to purify a person who has become ritually contaminated by contact with a corpse. Water from the vessel is sprinkled on the subject, using a bunch of hyssop, on the third and seventh day of the purification process. The priest who performs the ritual then becomes ritually unclean, and must then wash himself and his clothes in running waters. He is deemed impure until evening.

No less stringent than the laws pertaining to the heifer are the laws pertaining to the site where the heifer is burned. Almost 30 years ago, Rabbi Yonatan Adler, who is also an archaeologist, performed an in-depth study into the textual references to the site where the red heifer was burned, publishing his results in  in the Torah journal Techumin. His calculations, based on the Holy of Holies being located where the Dome of the Rock stands today, led him to a spot where Dominus Flevit, a Catholic Church built in 1955, now stands. Archaeological surveys discovered unique characteristics of the site that corresponded to descriptions in the Talmud.