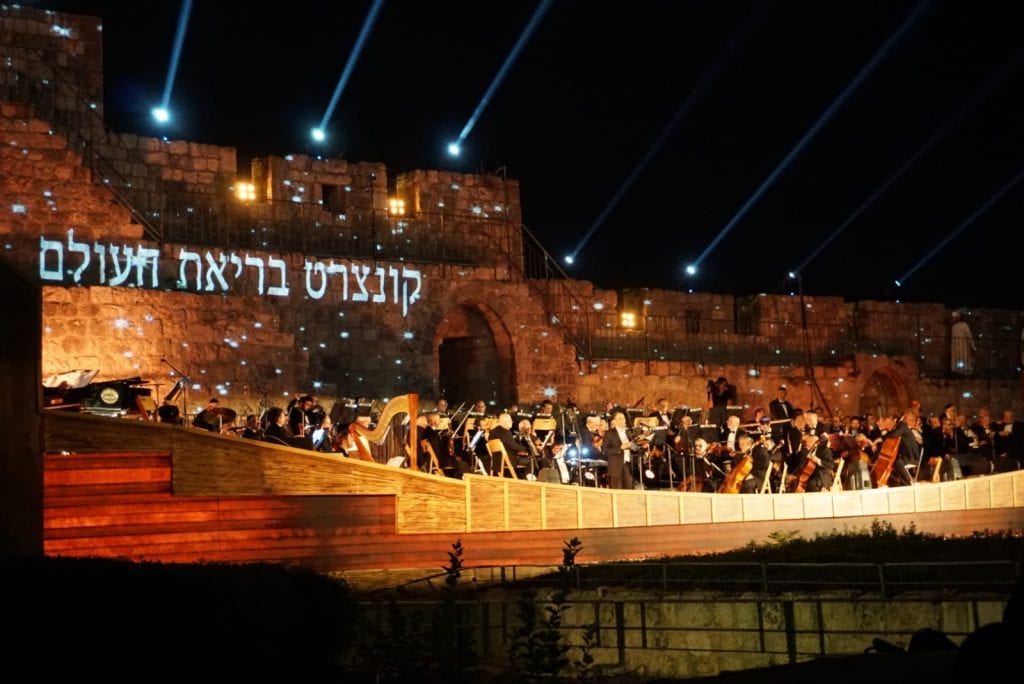 On Monday night, approximately one thousand people gathered at the foot of the Temple Mount for the World Creation Concert. However, what took place was not merely wonderful music accompanied by a spectacular light show: the event actually encapsulated several prophetic incidents taking place at once. In the not-so-distant future, the event may be identified as the moment a new, Biblically correct United Nations was established, potentially leading to a new era of global cooperation.

The Sanhedrin and the Mikdash (Temple) Educational Center hosted the World Creation Concert at the Jerusalem Archaeological Park – Davidson Center, arranging for it to take place one day before the 25th of the Hebrew month of Elul, the 5778th anniversary of the creation of the world according to Jewish tradition. The motive behind the timing was to give the event universal significance. The Temple Mount was chosen as the location because, according to Jewish tradition, the creation of  the world began at the even shtiya (foundation stone) that lay under the Holy of Holies in the Temple.

The connection between the Temple and the creation of the world was beautifully presented throughout the concert. The music followed the six-days of creation with some sections accompanied by choral presentations of Psalms that mirrored that particular aspect of creation. The creation of light was played while images of the gold menorah were projected onto the ancient walls. The creation of the oceans was accompanied by images of the Sea of Solomon, the brass laver that was used to wash the hands and feet of the priests before they performed the Temple service.

Perhaps the most powerful image was also the most low-tech element. At several points during the performance, the musicians rested their instruments while Kohanim (Jewish male descendants of Aaron the priest) mounted the ramparts in full priestly garb. The blasts of shofarot (rams’ horns) and silver trumpets prepared for use in the Third Temple echoed in the night, recreating the glory of the Temple as it appeared 2,000 years ago.

One non-musical element of the concert was powerfully prophetic. For several months preceding the event, the Sanhedrin had worked to contact foreign governments, inviting them to take their place as representatives of the 70 nations who populated the world, listed in the Bible as the grandsons of Noah. Honduras, Guatemala and Mexico answered the call, sending high-ranking delegations to attend.

Rabbi Hillel Weiss, spokesman for the Sanhedrin described that the concert has a vital role to play in helping the nations of the world in joining together to address these universal threats the world today.

“The world is being threatened in so many ways; ecologically, atomic weapons, terrorism, economically,” Rabbi Weiss told Breaking Israel News. “The United Nations has failed to unite the world in any effort to cope with these issues. That is because the UN is not based on Biblical principles that unite mankind. Human rights originated in the Bible, as did laws governing war. Ecology is a Biblical concept. When the nations came to Jerusalem to pray together in the Temple, they did so in recognition of the human principles that we all share. The United Nations rejected these human principles that bind and as such, has become a political battlefield that only makes these problems worse. They have appointed human rights violators to preside over the Human Rights Council. There is no justice in the International Court of Justice.”

“We are seeing the end of the UN, as the US and Israel separate themselves from it, “Rabbi Weiss said. “The United Nations should have collapsed long ago but it has drawn power from its decision to establish the State of Israel in 1948.”

The Biblical Sanhedrin in Jerusalem was a gathering point for universal cooperation and justice. The high-point of the concert came when the foreign representatives went up to the stage to sign an agreement with the Sanhedrin.

By signing, the nations acknowledged that they were answering a call by the Sanhedrin of Israel to accompany the people of God, as peoples, nations, and individuals toward establishing the Temple in Jerusalem as a house of prayer for all nations as prophesied in the Bible.

The text of the declaration was as follows:Sa

“The Sanhedrin – the council of 71 sages, in the courtyards of the holy Temple in Jerusalem, has called on 70 nations to pray to the Creator of the world on the 23rd of Elul, 5778, at the World Creation concert “

“The declaration of the nations that accompany the people of God:

“All this in order to serve only the God of Abraham, Isaac, and Jacob, as it is written:

We are all gathered together in the name of peace and love with  the people of Israel in the courtyards of the House of God as the sages of Israel and to fulfill the messianic vision of peace.

“This was the first step towards establishing a Biblically based United Nations,” Rabbi Weiss explained. “This necessarily has to be in Jerusalem, the city whose name means peace.”

In Hebrew, the word ‘shalom’, the root of the word Jerusalem, means ‘peace.’

Rabbi Weiss told Breaking Israel News, that representatives from several other nations have already contacted the Sanhedrin about the declaration.

Mordecai Persoff, head of the Mikdash Educational Center and one of the concert organizers, was pleased with the outcome of the event, noting that it accomplished far more than was apparent to the casual observer.

“The concert, as a social event, was successful but more importantly, the main purpose of it, to show the public that prophecy is coming to life, was enormously successful,” Persoff told Breaking Israel News. “When the Jews returned to Israel, when the state was established in 1948, when Jerusalem was unified in 1967, these were clearly miraculous manifestations of prophecy. But people are relating to these things as historical events with no prophetic meaning. That is because the real focus of the entire purpose is the reestablishment of the Temple as a House of Prayer for all Nations. Without this, it is possible to not see the prophetic connection. Last night, nations came together in Jerusalem to praise God, aligning with the Sanhedrin.”

Persoff cited the Talmud, which states that after the Sanhedrin was disbanded after the Temple was destroyed, music left the world.

“The world was created from the Temple Mount so when the Temple was destroyed, the world changed,” Persoff said. “By re-establishing the Sanhedrin, by bringing the nations into the effort to rebuild the Temple, we are engaging in a process that is recreating the world. Everybody who was at the concert, who listened to or saw the video, was witnessing actual prophecy coming to life.”

One group of Christians understood the prophetic implications of the concert and after reading about it in Breaking Israel News, decided to send representatives from their congregation, the Whole World Fellowship in Oakton Virginia, to attend. The concert was so clearly a prophetic “must-see” that the four representatives, Pastor Pitts Evans, Kurt Johnson, Yushik Seo, and Nancy Majette, flew in to Israel for 48-hours, solely to attend the World Creation Concert.

“I felt like the Lord was doing a new thing,” Pastor Evans told Breaking Israel News in a post-concert interview. “I knew I didn’t want to miss this coming into the world.”

“My language may be different than yours but about halfway through, when Rabbi Weiss spoke with the representatives of the nations, I began to sense the manifest presence of God,” Pastor Pitts said. “It ebbed and waned, but God’s presence was clearly there.”

“To me this was clearly a historic event,” Seo said. “It is the first of its kind, with the establishment of the Sanhedrin. The potential is enormous. It is impossible to say what will come, but whatever good God brings down to Israel, it spills over to the rest of the world.”

Seo cited several examples of historic periods when Christians became stronger in their faith that coincided with high-points of modern Israeli history.

“Israel is a key thing for us.”

Johnson agreed, quoting the Biblical verse that states that those who bless Israel will be blessed in return.

“We will always bless  Israel because it is the right thing to do,” Johnson said. “That is what God and Jesus want us to do. The blessing we have received in return just confirms this to be true.”

“It is clear that we need the Sanhedrin to act as an interface between faith and politics in order to spread this blessing even further in the world,” Johnson said.

Pastor Keith Anderson from Texas attended the concert, but stayed longer than 48 hours so that he could visit his many friends in the Holy Land.

“I didn’t understand the Hebrew but I certainly felt it,” Pastor Anderson said. “I don’t think you choose to love Israel. God draws you to that. It is definitely a calling.”