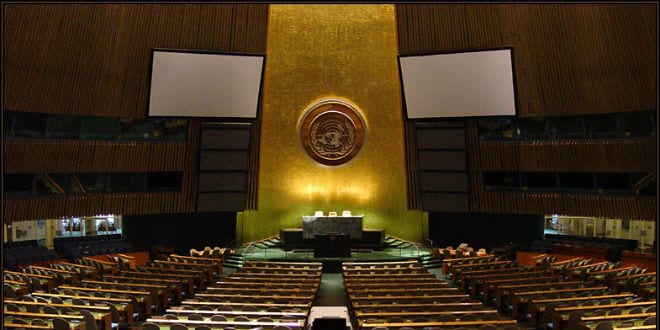 The 73rd General Assembly session will be held from ‎Sept. 18 to Oct. 5, and will feature speeches from ‎prominent world leaders, including Trump, who is set ‎to address the assembly on Sept. 25. ‎

The United States has, in the past, warned that if ‎Palestinian Authority leader Mahmoud Abbas ‎remains adamant in his refusal to engage the United States as ‎a mediator in the Israeli-Palestinian peace process, ‎Washington will introduce its regional peace plan ‎regardless of his reservations. ‎

Abbas has been shunning the U.S.’s peace efforts ‎since Trump’s Dec. 6 recognition of Jerusalem as ‎Israel’s capital and the subsequent move of the U.S. ‎Embassy in Israel from Tel Aviv to Jerusalem, and ‎has accused the Trump administration of being ‎‎“grossly biased” in Israel’s favor. ‎

According to the report, U.S. Special Representative ‎for International Negotiations Jason Greenblatt, ‎senior White House adviser Jared Kushner, U.S. ‎Ambassador to the United Nations Nikki Haley and ‎‎U.S. Ambassador to Israel David Friedman, who have ‎been working on the plan since early 2017, seek to ‎introduce it under the “most optimal conditions” and ‎the General Assembly is seen that the best venue to ‎do so. ‎

Last week, the four envoys released a joint ‎statement on Twitter acknowledging that “no one will ‎be fully pleased” with the much-anticipated ‎Israeli-Palestinian peace plan.‎

‎“No one will be fully pleased with our proposal, but ‎that’s the way it must be if real peace is to be ‎achieved. Peace can only succeed if it is based on ‎realities,” the statement said.‎

Al-Quds quoted an unnamed American official as ‎saying that Trump has been keeping the details of ‎the plan close to the vest as he prefers to outline ‎it in full at the world leaders’ meeting.‎

The source said Trump believed that if his plan ‎for Middle East peace were to fail, no other U.S. plan ‎would be able to resolve the decades-long regional conflict.‎

The official stressed that it ‎would be up to the Israelis and Palestinians to ‎accept or reject the plan.‎