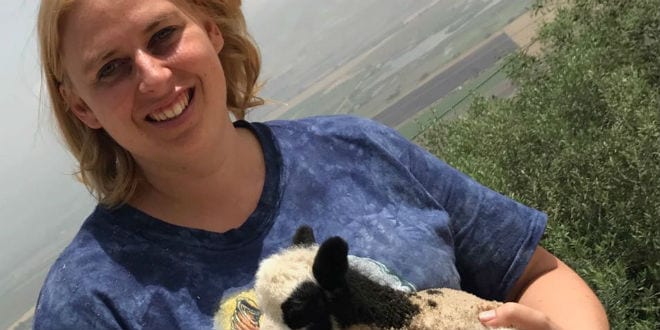 After a journey from the other side of the world, the flock of 100 Jacob’s Sheep may have found a permanent home; Migdal Eder, a site designated for grazing animals destined for the Temple altar.

The return of Jenna Lewinsky’s flock of Jacob’s Sheep to Israel has been a harrowing journey. Just as the Children of Israel made many stops during their 40 year traverse of the desert, the sheep have stopped seven times since landing in Israel 18 months ago. After their initial arrival, the sheep were quarantined in the far south, living under the threat of rocket fire from Gaza. Their last grazing ground was on a mountain overlooking the border with Lebanon. Moving from the far south where they grazed under the threat of Hamas rockets, they moved to the Jordan Valley and then to a mountain top overlooking Lebanon. They are currently in Gush Etzion awaiting the construction of facility in Migdal Eder (the tower of the flock), the place from which the Messiah is prophesied to come.

According to breed aficionados, the sheep originated in the north of Biblical Israel, and were sold to Egypt. By way of North Africa and Morocco, the sheep made their way to Spain, and finally to Britain, where they were favored by landed gentry for their distinctive spotted appearance and four horns.The history of the breed mirrors that of their original owners and though they are indigenous to the Middle East, none of the breed remain in the region. The sheep most commonly seen in Israel are from the Awassi breed and originated in Syria.

Jenna and her former husband, Gil, acquired the flock in Western Canada with the intention of reuniting the sheep with Israel. It took them three years to arrange the journey, receiving special permission from the Israeli Department of Agriculture to import livestock from Canada, something which is generally not allowed. After a 2,000 mile journey from British Columbia to Toronto, the sheep languished in quarantine for three months before 119 sheep boarded 11 flights to the Promised Land.

Miraculously, none of the sheep died in transit, but, as Rabbi Shimon Bar Yochai warns in the Talmud, “The land of Israel is acquired through suffering.” After sitting in quarantine for one month in southern Israel, the flock searched for a home. In June of last year, the herd contracted Bluetongue Disease, a virus transmitted via insects. Mortality from the disease can run as high as 90 percent in imported breeds. Of the Lewinskys’ herd, 48 sheep died in the one month, leaving slightly more than half the original herd. Miraculously, none of the newly born lambs, usually the hardest hit by the disease, died.

Jenna is currently keeping the herd in Gush Etzion, halfway between Jerusalem and Hebron. There are no facilities for the sheep but she is fundraising to build a permanent home for the sheep. The Israeli government has given her a sizable plot of agricultural land adjacent to Efrat, almost 100 acres.

Remarkably, the name of the location is Migdal Eder, the tower of the flock. Adjacent to Efrat and Bethlehem, the new home of the sheep may indeed be the location described in the Bible as near the burial place of Rachel in modern Bethlehem.

Thus Rachel died. She was buried on the road to Efrat—now Beit Lechem. Over her grave Yaakov set up a pillar; it is the pillar at Rachel‘s grave to this day. Yisrael journeyed on, and pitched his tent beyond Migdal-eder. Genesis 35:19-21

Targum Yonatan, an Aramaic translation of the Bible written by Yonatan ben Uzziel in the second century CE, interpreted this verse to have implications for the Messiah. He wrote, “Jacob took his tent and pitched it after Migdal Eder, the place from where the King Mashiach is destined to be revealed at the end of days.”

The location is especially fitting as the location for the flock since the Mishna (oral law) describes Migdal Eder as the fields for grazing animals intended to be sacrificed in the Temple.

“When I first went to visit the site, I looked out and in the distance, I could just make out Jerusalem,” Lewinsky told Breaking Israel News. “I felt like we were finally home. The sheep will receive the blessing from the Holy City.”

Migdal Eder is also identified by the Prophet Micah as the place from which the dynasty of King David will be reestablished.

And you, O Migdal-eder, Outpost of Fair Tzion, It shall come to you: The former monarchy shall return— The kingship of Fair Yerushalayim. Micah 4:8

As part of her fundraising effort, Lewinsky brought 50 Jacob’s Sheep horns from a certified Jacob’s Sheep herd in England and turned them into shofars. She is selling them online and the proceeds will go to building a home for Lewinsky’s flock.