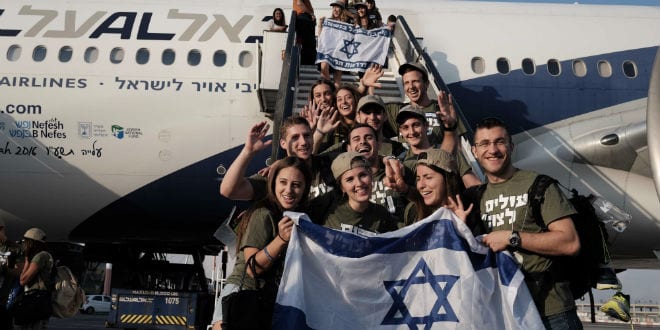 On Wednesday, August 15th a flight of 239 Israeli immigrants from 24 US States and three Canadian provinces landed in the Jewish homeland as a part of the Nefesh B’Nefesh charter flight. The aliyah (immigration to Israel) flight included 30 families, 90 children and 57 future Israel Defense Forces (IDF) soldiers.

Founded in 2002, Nefesh B’Nefesh is dedicated to revitalizing North American and UK immigration to Israel by minimizing financial, professional, logistical and social obstacles of aliyah. Once with a retention rate of just 40 percent of immigrants, Nefesh B’Nefesh has helped ensure that 90 percent of immigrants remain in Israel. The government mandated aliyah organization has assisted more than 57,000 Western immigrants, contributing to the social, economic and demographic welfare of Israeli society while infusing the country with idealistic enthusiasm and optimism.

Sofa Landver, Minister of Aliyah and Integration welcomed the new immigrants to the Israeli family in the Jewish homeland. “North American aliyah (immigration) both strengthens Israel’s economy and boosts the country’s national pride,” she said.

According to Doreet Freedman, Vice President of Partnerships at Nefesh B’Nefesh, Heidi Rothberg’s father was instrumental in building Israel, growing up with David and Paula Ben Gurion. Her donation, facilitated by JNF, allows these 239 immigrants to follow their dreams.

“Nefesh B’Nefesh and JNF share a vision of building a vibrant Israel. Where JNF was once planting trees, today they are planting people,” she told Breaking Israel News.

“It is not easy to pick up your roots and move, join an army and another country that does not speak your native tongue, but Nefesh B’Nefesh makes this possible and successful,” Ron Werner, senior lay leader of JNF USA, told Breaking Israel News. “Today we say hinenu– we are here and we are thriving.”

To the future IDF soldiers, he said, “You are the link reconnecting Jewish history to this adventure that is the State of Israel. Dozens of generations of Jews persecuted and massacred all around the world could only dream about taking part in a Jewish army and defending Jewish life.

“You just took an active role in Jewish history,” said Oren, who claimed that at its core, Zionism is Jewish responsibility. “Only here in this land can we as Jews take responsibility for the wellbeing of this country, and there is no greater Zionist responsibility than making aliyah,” he said.