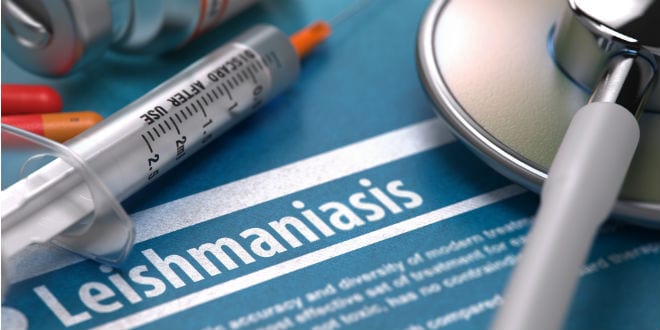 Judea and Samaria Ministry of Health

It certainly hasn’t reached the dimensions of the Ten Biblical Plagues, but leishmaniasis – dubbed “Rose of Jericho” because of the red rash it can cause – is a potentially disfiguring but not life-threatening skin disease. It is endemic to the Middle East, Latin America, southern Europe and other hot regions and is spreading, causing concern to Israeli parasitologists and dermatologists.

The disease is caused by protozoan parasites that belong to the genus Leishmania and is transmitted by the bite of female sand flies that bite infected furry rodents. The tiny flies, which are about a third of the size of mosquitoes, can get through regular window screens and are thus hard to keep out of homes.

The health authorities advise various ways of reducing the risk of infection: Take special care from June through October; put very-fine mesh screens on doors and windows to prevent sandflies from entering ; use air conditioners and fans; wear long, light clothing; do not sleep outside in areas where rock hyraxes and gerbils are found; and apply ministry-approved mosquito repellent with Deet on exposed skin (including the face) and on clothing.

Cutaneous leishmaniasis is the most common form of leishmaniasis, while visceral leishmaniasis is a severe form in which the parasites have migrated to the vital organs. Any skin lesion that doesn’t heal within a number of weeks, especially a lesion that developed after a trip to an area known to indigenous to the parasites should be seen by a dermatologist. The most common method to diagnose the disease is through a biopsy taken from the infected area. The biopsy allows the doctor to see if the parasite is there but does not determine the type of disease. This identification be only be made with a molecular exam.

The infection appears as red sores (hence its nickname) on the skin a few weeks or months after being bitten by the sandfly. The sores can cause permanent, ugly scars if untreated, and there is no protective vaccine or a single cream, pill, injection or infusion that cures it.

Leishmaniasis is one of the diseases that, since 1949, must be reported by medical professionals to the Health Ministry so it can monitor the situation. The more veteran form of leishmaniasis in Israel is L. major, which has been known here for a century and was first identified in Jericho – one of the world’s oldest cities and of biblical importance.

But in the last quarter-century, a second type named L. tropica arrived in Israel from Afghanistan via Jordan, with the sandfly vectors – which live in the earth rather than in standing water like mosquitoes – biting, small-eared furry rodents named rock hyraxes. These mammals are legally protected animals, so they can’t be hunted or poisoned except when the authorities identify a location that has been overrun by them.

Since 2001, there has been an increase in the incidence of skin leishmaniasis in Israel in the southern region, and it spread to new places that were previously unknown, such as settlements in Samaria.

In 2017 the Health Ministry received fewer than 60 reports of leishmaniasis – or 2.3 cases per 100,00 residents, down from 4.5 cases per 100,000 in 2010. But experts in the field now call the situation catastrophic. Prof. Eli Schwartz, a veteran expert in the disease at the institute of geographic medicine and tropical diseases at Chaim Sheba Medical Center in Tel Hashomer and president of the Israel Society for Parasitology and Tropical Diseases, claims that most cases are not reported. “Either people who were infected don’t go to their doctors, or they are not diagnosed properly or the laboratory or doctor fails to report them to the ministry,” Schwartz told Breaking Israel News.

A few years ago, the infectious disease specialist co-wrote a Hebrew-language book titled A Hidden Traveler: Narratives of Travelers With Tropical Diseases on the risks of catching a variety of diseases during treks abroad that even many Israeli doctors have never seen. For those who intend to go on a journey or trek, worried parents of backpackers, medical staffers, company workers involved in the Third World and just those who are curious and enjoy reading, the book  opens a window on the relatively new field of tropical diseases, including leishmaniasis.

“What the Health Ministry reports about leishmaniasis is just the tip of the iceberg,” Schwartz insisted. “Its officials put the blame on the Environmental Protection Ministry, which is officially in charge of prevention of infection in the hyraxes and the fly vectors. But the Health Ministry must be actively involved, because they have to pay for treatment of patients, which is very costly and often not completely effective,” said Schwartz.

“At my institute, I see many cases every month, and we are only one hospital. Patients come for treatment to half-a-dozen other Israeli hospitals as well. Leishmaniasis has reached the Galilee and the Negev in addition to Samaria. We don’t know what has caused the spread of the disorder.”

There is no vaccine to prevent infection. There are topical and systemic treatments for the scarring and necrosis of skin on the face, arms and legs. More effective than medications applied to the skin are intravenous injections of toxic chemotherapy that are given daily at the hospital for a month. Children and adults have to come in regularly and miss out on school and work, Schwartz noted. Even after treatment, scars can remain.

“The Health Ministry’s statistics refer to rates per 100,00 Israelis. Instead, they should calculate them according to regions where leishmaniasis is endemic,” said Schwartz. “Rose of Jericho is a tropical disease, which means that it is found mostly in poor countries. Unusually, Israel – with a strong, powerful economy – is among the warm countries that are affected, but the government has not spent enough money for research, prevention and treatment.”

Asked to comment, Health Ministry associate director-general Prof. Itamar Grotto declared that “we have dealt extensively with this matter. We know that there is under-reporting of leishmaniasis, but we are involved in a number of large studies that examine the level of reporting and the real morbidity. The largest study received funding from the Israel Science Foundation, in which we evaluate intervention methods to prevent the disease from being resettled in new communities.”

He called on the Environmental Protection Ministry, which is “the main authority responsible for this matter,” to arrange for the killing of the protected hyraxes that are bitten by the sandflies. “As a result of this situation, a national plan for dealing with skin leishmaniasis problems in Israel was formulated by the government eight years ago. The Environmental Protection Ministry was put in charge, in coordination with the Ministries of Health, Defense and Interior and the Nature and Parks Authority.”

Localities that are known to have infected hyraxes were told to set up fences to bar the rodents’ entry. The program included public information campaigns in selected localities and efforts to reduce the transfer of the parasite, monitoring the evaluation of the success of experimental activities, research to promote knowledge of disease transmission methods and finding effective measures to cut and treat it. But the program lapsed, said Grotto, adding: “In my opinion, this program should be renewed.”

After being prodded several times by Breaking Israel News, Grotto agreed to initiate a joint meeting with Schwartz and his counterparts in the Environmental Protection Ministry.