A Week of Earthquakes, Eclipses, and Other Divine Signs

Home » A Week of Earthquakes, Eclipses, and Other Divine Signs 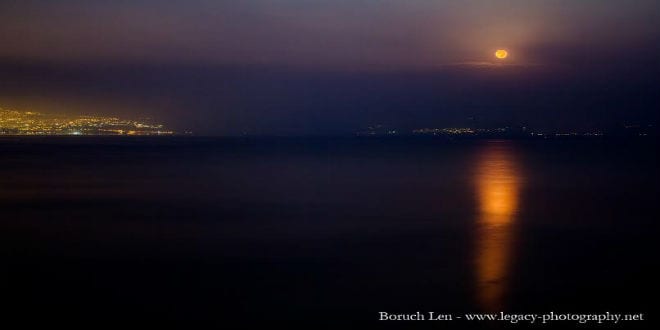 Several rabbis are pointing to last week’s rare lunar eclipse and continued earthquakes as a divine pre-Messianic wake-up call. In fact, it isn’t only the rabbis. Even Arab sources are labeling the recent earthquakes as part of the end-of-days conflict centered around Jerusalem.

On Friday, Israel witnessed two natural phenomena: a 4.2 magnitude earthquake struck the northern Kinneret area at noon and as the sun set, a total lunar eclipse hung overhead, turning the moon deep crimson. The eclipse was remarkably rare: the longest lunar eclipse seen over the skies of Israel in more than a century.

The earthquake was remarkable, but not for its rarity. It was the second of the week and the most recent in a series that has shaken northern Israel in the past several weeks. On a practical level, this is alarming since Israel is situated along the Syrian-African rift, a tear in the earth’s crust running the length of the border separating Israel from Jordan, extending from northern Syria to Mozambique.The last major earthquake in Israel struck in 1927, a 6.2-magnitude tremor that killed 500 people and injured another 700. Experts have warned a large earthquake could strike Israel in the near future, and the government has begun funding projects for public buildings to be bolstered against tremors.

If the recent wave of earthquakes are a sign of things to come, it may have Messianic meaning. Massive earthquakes in Israel are prophesied to accompany the multinational Gog and Magog conflict  that will signal the end of times.

Rabbi Haim Shvili, a 20th-century Jewish mystic,described precisely how these earthquakes will play out. In “Cheshbonot HaGeula” (Accountings of the Redemption), Rabbi Shvili’s book of predictions concerning the Messiah published in 1935, he assessed that these earthquakes will come during the holiday of Sukkot, coinciding with the War of Gog and Magog. Rabbi Shvili noted that the seismic activity will specifically target Muslim and Christian sites, destroying pagan temples and monuments to foreign gods throughout Israel.

Surprisingly, the Arabs also seem to believe that the current earthquakes are a part of an imminent conflict between Israel and its enemies in  manner identical to that described by Rabbi Shvili. Maal Zakarna, a columnist for Jordan’s Ad-Dustour daily newspaper, recently wrote about the earthquakes in Israel, blaming them on the IDF.

“It could be that they were caused by experimental explosions carried out by the Israeli occupation’s army at a certain depth under the Kinneret,” he wrote. The IDF’s goal, according to Zakarna was to perpetrate “a major criminal action against sites in occupied Jerusalem which are holy to Islam and Christianity, and especially against the Al-Aqsa mosque, Dome of the Rock, and the Church of the Holy Sepulchre…[to] create a pre-planned earthquake to destroy them in preparation for creating a Holy Temple in the attempt to Judaize Jerusalem.”

Rabbi Yosef Berger, the Rabbi of King David’s Tomb on Mount Zion, feels that signs the Messiah is imminent are so prevalent they cannot be ignored.

“It is impossible to say specifically what is the meaning of heavenly signs but it is absurd to ignore the signs when they are clearly happening, and happening in a most unusual manner,” Rabbi Berger told Breaking Israel News.  “In addition to the earthquakes and the lunar eclipse, a huge stone fell from the Western Wall on the day after the Tisha B’Av fast,” Berger said. “God put the sun and the moon in the heavens as signs, for us to pay attention to. With all these signs coming together, how can you not pay heed?”

Hashem said, “Let there be lights in the expanse of the sky to separate day from night; they shall serve as signs for the set times—the days and the years; Genesis 1:14

Rabbi Berger pointed out that there was skepticism toward the many predictions made about the total solar eclipse that traversed the continental United States last summer. Nonetheless, the predictions proved accurate when, directly after the eclipse, the U.S. was struck by a series of catastrophic hurricanes, conforming precisely to the dire predictions.

Berger speculated about the implications of last week’s lunar eclipse.

“A lunar eclipse is specifically mentioned in the Talmud as a bad omen for Israel,” he said. “Israel has omens but can transcend them through our connection to Torah and mitzvot (Torah commandments).”

The rabbi cited the Book of Jeremiah to illustrate his point.

“The sun and the moon can be omens of evil but the only for people for whom these omens are fixed and unchangeable, those who worship the sun and the moon. Our current incarnation of idolaters are people who believe that science rules the world and is more important than God.”

Rabbi Berger noted that the timing of the lunar eclipse may have indicated something about the event and its prophetic implications.

“The fact that the lunar eclipse happened directly after Tu B’Av, actually began during the daytime of Tu B’Av, may indicates that this is a case of hamtakat hadinim (sweetening of judgements),” Rabbi Berger said.

Friday was Tu B’Av, the fifteenth day of the Hebrew month Av. Coming after the somber fast of Tisha B’Av, the ninth of Av, that commemorates the destruction of both Temples, Tu B’Av is described in the Mishna (oral tradition) as a joyous “holiday of love.”

With regard to the recent earthquakes and possibility of further ones, Rabbi Berger suggested a possible explanation. “Though they could come in a disastrous manner that harms Israel, if we attach ourselves to hashem (God, literally ‘the name’) this could be sweetened.”

Rabbi Levi Sudri, an award-winning Bible expert, also felt the series of natural phenomena had great import but what it is exactly is still hidden. He noted that this hiddenness was the common point connecting the lunar eclipse and the earthquakes.

“The moon, by its nature, is about being hidden, about an inner modesty,” Rabbi Sudri told Breaking Israel News. “That is an important trait of Israel, which is why we set our calendar by the moon. The moon becoming full is a reference to pregnancy, which is something developing in a hidden manner.”

“An earthquake indicates that changes are happening deep inside the earth, hidden from human eyes,” Sudri said. “Convulsions under the waters of the Kinneret is clearly a hint of something being born.”