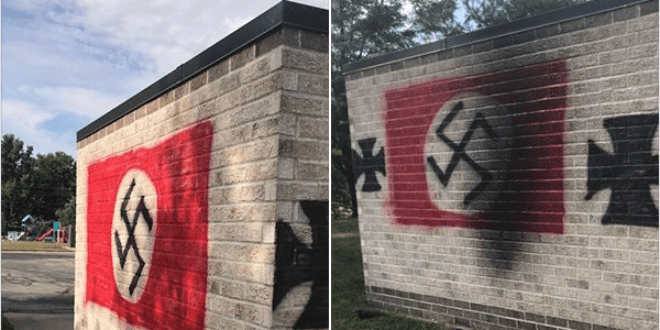 Indiana, is the home state of United States Vice President, Mike Pence, who was quick to take to Twitter to post his utter condemnation of the act.

Sickened and appalled by the cowardly act of vandalism at Congregation Shaarey Tefilla; a beautiful synagogue in Carmel, Indiana where I have many good friends. Those responsible must be held accountable. These vile acts of anti-Semitism must end. https://t.co/0h6rKPilda

Following the incident, security has been increased at Indianapolis-area synagogues, the Indianapolis Jewish Community Relations Council told local media. Corey Freedman, the synagogue’s president, posted on Facebook that the congregation is working with the local police department and is liasing with other synagogues and organizations in the area, to ensure they were made aware of the event and could take appropriate measures.

Debby Barton Grant, CEO and executive vice president of the Jewish Federation of Greater Indianapolis, posted pictures of the vandalized shed on her personal Facebook page. She also launched a scathing attack on Indiana’s failure, one of only five states in the union, to pass a hate crime statute.

“There can be no equivocation when it comes to rejecting Nazism, white supremacy, and anti-Semitism,” she said. Such bigotry in all its forms is antithetical to the principles of freedom and equality that form the cornerstone of American democracy and our pluralistic society.”

This latest incident comes amid an uptick in reported anti-Semitic attacks and threats, according to Anti-Defamation League data. It found that in 2017, anti-Semitic incidents in the U.S. including harassment, vandalism and assault, increased by 57 percent from the previous year.