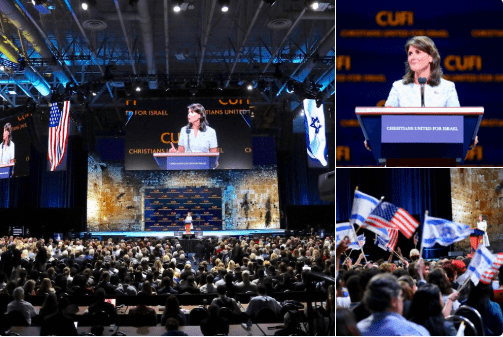 The 13th annual Christians United for Israel summit in Washington DC recently came to a close, during which the organization’s rock solid support for Israel was reconfirmed.

The summit was also notable for the widespread support of US President Donald Trump toward Israel. It prompted Israel’s Ambassador to the United States Ron Dermer, to claim that the current White House administration is the best ally Israel ever had.

“From President Trump to Vice President [Mike] Pence to Secretary [of State Mike] Pompeo, from [National Security Adviser] Ambassador [John] Bolton to [U.S.] Ambassador [to the United Nations Nikki] Haley to [U.S.] Ambassador [to Israel David] Friedman, from [Senior Adviser to the President] Jared Kushner to [Middle East envoy] Jason Greenblatt to Sarah Sanders, this is an administration that sees Israel as an ally and that treats Israel as an ally,” Dermer exclaimed.

Israeli Prime Minister Benjamin Netanyahu – who addressed the approximately 5,000 assembled delegates on Monday via satellite link from his Jerusalem office – was effusive in his praise for American Christian supporters of Israel, while decrying Iran’s pernicious influence (a running theme of the conference) in the region. He said that Israel was the only country in the Middle East that actively safeguarded not only Christians as individuals, but also Christian practice.

“Israel is also the only country for thousands of miles where Christians not only survive, they thrive. Christian holy sites are protected and Christian worship is done without fear. Christians have achieved incredible heights in Israel. We have an Arab-Christian who served on our Supreme Court for 15 years. We have others — diplomats, businesspeople, university professors, doctors, everything. They’re in every field — many, many examples of Christians who contribute greatly to Israeli society and share in the great miracle of Israel’s success,” the prime minister said.

Other keynote speakers included the British Army’s Col. Richard Kemp – a fierce defender of IDF tactics and Israel both from podiums and in social media. Also, U.S. Ambassador to the United Nations, Nikki Haley, who was presented to rapturous applause, with CUFI’s “Defender of Israel” Award for her sterling work at the poisonous United Nations. “Washington may be a swamp, but the U.N. is a cesspool—a cesspool of anti-Americanism and anti-Semitism,” said Dermer.

Haley also gave a powerful speech in which she reiterated her criticism of the United Nations for kowtowing to serial human rights abusers such as Sudan and Venezuela who sit on the Human Rights Council (UNHRC). She denounced the organization’s rejection of the embassy move from Tel Aviv to Jerusalem and the singling out of Israel for condemnation in the ongoing flare-up with Hamas along the Gaza border. Haley also defended the U.S.’s withdrawal from the UNHRC, citing that, “The United States has no moral duty to be neutral between right and wrong. On the contrary, we have a moral duty to take sides, even when that means standing alone.”

Stuart Force, whose son, Taylor, was murdered by Palestinian terrorists in Tel Aviv in 2016, also spoke at the summit.

The Taylor Force Act which was signed into law by President Trump as part of a $1.3 trillion omnibus in March, stops American economic aid to the Palestinian Authority until the PA changes its laws to cease paying terrorists and their families — a longtime policy known as “pay to slay.”

Pastor John Hagee founded CUFI in 2006 and it currently boasts approximately 4.5 million members. Hagee, who emceed the event, reiterated the importance of Christian support for the Jewish state. “You often hear the phrase ‘Christian anti-Semitism,’ ” he said. “There is no such thing as Christian anti-Semitism. Christianity is driven by the love of G-d.”