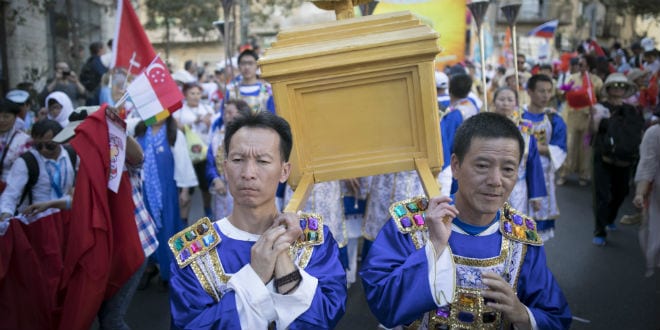 As the only Jew attending high school in a small town in Pennsylvania in the 1960s, Alan Newman grew up surrounded by Christians. He told Breaking Israel News that he always had “a social awareness of what it’s like to be among Christians. All my good friends were Christians.”

Newman did not experience anti-Semitism as a child. About his neighbors, he said, “They respected our Passover. They would come over and watch us light Hanukkah candles. When my father passed away in 1976, the entire town shut down because we were a beloved and respected family.”

Today, Newman is a retired banker who spends most of his time advocating for Israel. He is passionate about four interrelated topics – celebrating the miracle of the re-establishment of the State of Israel after 2,000 years, cooperating with Christian Zionists, supporting the sacrifices of lone soldiers and helping to educate Ethiopian Jews.

Since writing a book was on his bucket list, Newman channeled these four passions into creating Good Heart, a novel about the relationship between a Jewish family and a Christian family in the US over three generations and the central role Israel plays in their lives.

“It’s a love story about Israel. I was trying to tell this story so [even] an American high school student, Christian or Jew, can learn something. It’s PG-13,” Newman explained.

“It sweeps you along. It’s not a historical novel. There is no role here for Tom Cruise or Gal Gadot. It’s just regular people. [With this book], I can educate and advocate quietly. [The story] doesn’t attempt to be balanced. I wrote about the four things that most touch me about modern Israel.”

Newman believes the book is carried by “the full-bodied affection between the two main characters. Readers can walk along with them. The book is a little like having a conversation with a good friend.

“I think that most people are little people, not celebrities, movers and shakers. They want to have their feelings validated and I think the book does that. The miracles, the positive aspects of Israel are reflected.”

Newman especially wanted to amplify the stories of ordinary Christians who support Israel. In Good Heart, John Langford, patriarch of the fictional Christian family, helped liberate Dachau, the German concentration camp, in 1945. John’s love and respect for Israel was handed down to his son Bobby. “The stories and experiences of Christians seeing the camps cannot be told often enough,” the author asserted.

Newman became acquainted with Christian Zionists as a result of advocating for Israel. “My involvement and leadership within AIPAC led to meeting Christian Zionists. There are many Christian participants in AIPAC. Through AIPAC I’ve gotten to meet many leaders from CUFI and ICEJ.”

On a local level, he connected with the Christ Fellowship Church in Palm Beach, Florida. “Several of the Christians that belong there and are leaders there also participate with AIPAC. If you go to their events, on their stage sits an American flag to the left and on the other side is the Israeli flag. It is a heartwarming story of respecting and protecting Israel. You come away from these events with appreciation for their effort and their sincerity.”

Asked about the importance of Jews cooperating with pro-Israel Christians, Newman commented, “Christian and Jewish pro-Israel cooperation begins with the primacy of our Judeo-Christian Biblical connection and extends to Israel’s centrality to Western Civilization’s survival. To quote Shakespeare, ‘we band of brothers,’, we Christians and Jews, must stand strong to defend the truth of Israel’s legal basis and to help her to fulfill her ‘light unto the nations’ mission.”

Good Heart has been warmly received by Christian Zionist leaders, including Susan Michael, USA Director of the International Christian Embassy Jerusalem. She said, “Good Heart is a delightful read that introduces Jews and Christians to each other through a very natural and heart-warming tale of two families that intertwine with each other and the newborn State of Israel. While it is a walk down memory lane for some of us, the less familiar reader will learn much about Israel and the beauty of Jewish-Christian relations found in this tale of genuine friendship.”

While acknowledging the history of violent Christian anti-Semitism, Newman is aware that, today, “there’s a sense of moral righteousness that has come to Christians at this time in history, where they want to engage and participate with Israel.”

He further asserts that, “Jews need to appreciate the righteousness of the Christians who support Israel. How Jewish people accept the concept of the importance of the Judeo-Christian alliance leads back to why I wrote this book.”

“It’s a little book, a little story that nudges people toward learning more about Israel and to respect the relationship between Christian Zionists and Jewish Zionists. Pastor Tony Crisp, Director of Strategic Initiatives for the International Christian Embassy Jerusalem said about the book, “It carries within it our hearts and helps Jews and Evangelicals clear up misunderstandings without ‘preaching’ to them.”

Newman is happy to arrange for organizations that educate about Israel “to get copies of the books at a bargain price. It’s my pleasure to donate my profits to these organizations.” He wants the book to be used to gently educate people about the good points of Israel.

“I’m trying to reach out to Christian and Jewish organizations to use Good Heart to satisfy the strategic needs they have. It’s my full-time job to find organizations who can use this book, which tells a gentle little story, to help deliver some of the education and orientation [that is] needed.”