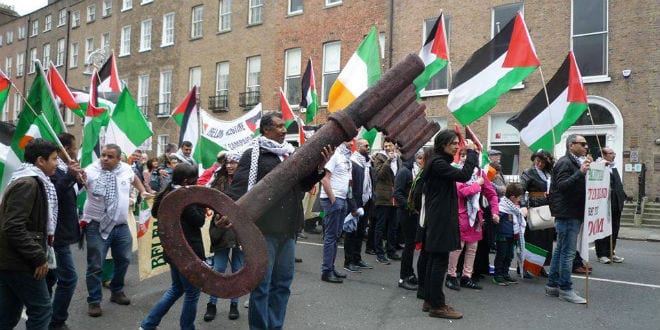 In a further blow to already strained Irish-Israel relations, the Irish Senate yesterday approved a previously postponed bill that will criminalize trade with Israeli settlements – and could lead to the imprisonment for those who import settlement goods.

The legislation, titled “Control of Economic Activity (Occupied Territories) Bill 2018,” was approved 25-20 in the Senate, calls to “trade with and economic support for illegal settlements in territories deemed occupied under international law.”

The bill had come before the Irish Senate earlier in January, in which Ireland’s Foreign Affairs Minister Simon Coveney, who condemned Israeli settlements as “unjust,” and recommended that the government oppose the bill and adjourn a vote on it. The original proposition of the bill provoked a strong Israeli response, with Prime Minister Benjamin Netanyahu summoning Ireland’s ambassador to Israel, Alison Kelly to explain. The Prime Minister’s Office said at the time that the legislation’s “sole purpose is to support the BDS movement and harm the State of Israel.” Ambassador Kelly was summoned to the Foreign Ministry Thursday, for a similar reprimand.

Irish Senator Frances Black, who sponsored the legislation, stated that “Irish foreign policy will always stand on the side of international law, human rights and justice.” She decried that goods from Israeli settlements – which she claimed had been condemned as “illegal” by the European Union, the United Nations and the Irish government – were still being freely sold in Irish stores.

Israel’s response has been swift and unambiguous, although Palestinian officials and Arab-Israeli MK’s welcomed the Irish move.

“The Irish Senate has given its support to a populist, dangerous and extremist anti-Israel boycott initiative that hurts the chances of dialogue between Israel and the Palestinians; it will have a negative impact on the diplomatic process in the Middle East,” the Foreign Ministry said in a statement.

“The absurd in the Irish Senate’s initiative is that it will harm the livelihoods of many Palestinians who work in the Israeli industrial zones affected by the boycott,” read the statement, issued by the ministry’s spokesperson, Emmanuel Nahshon.

The Palestinians meanwhile were jubilant, calling the Irish Senate vote a courageous step that builds on the historic ties between Ireland and Palestine. Furthermore, Joint (Arab) List MKs hoped that the bill would “mark the beginning of a new stage in which Israel starts to pay an international political, economic and moral price for its actions.”

Despite this initial victory, final passage of the bill is far from assured. It faces a battle in the Dáil, Ireland’s lower house, controlled by the center-right Fine Gael Party that opposes the legislation.