Is Desalination the Answer?

Home » Is Desalination the Answer? 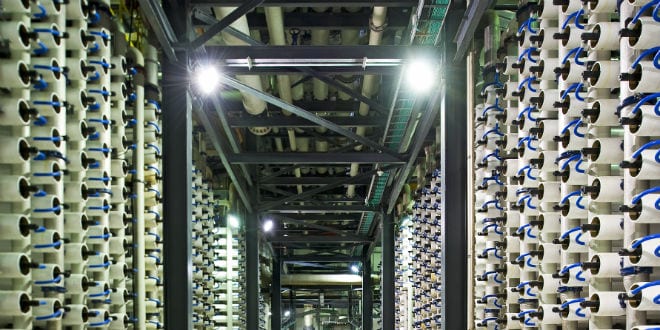 Over the last two decades, desalination has appeared to be the answer to Israel’s urgent potable water shortfall, but in reality it has produced damaging and problematic unintended consequences.

It is time to rethink Israel’s water strategy, especially in light of the April 2018 storms when millions of cubic meters of urban runoff simply flowed into the sea, rather than being redirected to replenish diminishing natural underground water reserves (aquifers). And beyond re-thinking the strategy, there are challenging questions about why Israel is proceeding with hugely expensive and energy-inefficient desalination rather than a proven cheaper and better alternative.

For at least the last five years, an acute lack of rainfall in drought conditions and an accelerating water deficit has been overtaxing Israel’s desalination and wastewater treatment plants. The received wisdom is that the only answer lies in the construction of more desalination plants, and indeed Israel’s Energy and Water Ministry has announced its intention to build two further such plants, which would be the sixth and seventh respectively – at a cost of approximately US$400 million each. Is this the most efficient and cost-effective response?

With the political and military temperature rising, and a standoff with Iran now teetering, investment in less targetable and more energy efficient water purification and storage sites would seem logical and appropriate. So why, when there is growing and significant evidence for more effective, cost-efficient and equitable solutions to the water crisis is there a myopic focus on the perceived impregnability of water desalination?

For Dr. Yaron Zinger, from the Center for Water Sensitive Cities in Israel (a unique platform, cooperating with Water Sensitive Cities Australia and headed by KKL-JNF, in collaboration with the Hebrew University, the Technion in Haifa and Ben-Gurion University), a number of pilot programs and field studies point to the efficacy and potential widespread implementation of biofiltration, which converts wasted urban runoff into a new secure water resource.

Biofiltration is the process of using selected plants and different soil densities to remove impurities from rain or storm water.  And it is an Australian model that provides the inspiration – Australia leads the world in biofiltration with thousands of bio-filtration systems in the city of Melbourne and many more in the city of Adelaide where hundreds of Dunams use biofiltration to create drinking water.

Zinger and Prof. Ana Deletic, a world-renowned academic and expert in water engineering, were part of a team that conducted a case study in Melbourne, and found that growing plants in certain areas and filtering rain and drainage runoff water through them, resulted in several positive outcomes: primarily, the treated water was cleaned, purified and stored; and secondarily, the ambient temperature surrounding biofiltration sites was reduced, and the vegetation and foliage at the sites enhanced the attractiveness to residents of nearby areas. A 2010 agreement between Water Sensitive Cities Australia and KKL-JNF to establish a joint Australia-Israel research center also led to examining broader questions about urban planning and use of water.

The cost of biofiltration programs was found to be at least 20 per cent less per unit of cleansed water than the cost of desalination, yet advocates like Zinger face serious challenges in obtaining the backing of Israeli decision-makers to progress to an Israeli national scale from the small, but successful Water Sensitive City technology biofiltration pilot projects established in 2010 in Kfar Saba, and subsequently in Bat Yam and Ramle. These pilot projects were successful and should lead the way to create a new urban water resource.

Water planning: Only a question of economy?

Case studies in Israel have confirmed the Australian finding that it is considerably cheaper to deliver biofiltered water through an aquifer than to desalinate water.  Yet the value of drinking water strategy cannot be counted purely in economic terms.

According to Joe Krycer, former CEO of JNF Australia (Victoria) who worked with Zinger and Deletic to establish the joint Australia-Israel water research center, other important benefits of biofiltration include reduced dependence on air conditioning as the ambient temperature is reduced; the longevity of proximate asphalt roads can be increased by up to 20 per cent; and vitally, biofiltration acts as a cleansing barrier which inhibits diesel fuel and petrol which is washed off roads from draining into and contaminating the aquifer or the sea and endangering health.

Environmental and human costs accrue from an over-dependence on desalinated water. The energy required to desalinate seawater comes through electricity, which is expensive and its production exacerbates pollution. Reverse osmosis, by which a semi-permeable membrane is used to remove ions, molecules and larger particles from drinking water (the process used in Israeli desalinization), creates brine and other by-products such as iron oxide that can neither be safely deposited on land or at sea. There is growing evidence too that vital minerals which are extracted through desalination create health problems across age groups. The lack of magnesium, for example, has been linked to greater numbers of fatal, rather than treatable, heart attacks; lack of iodine in early developmental years can cause lower intellectual ability; and lack of fluoride is a factor in tooth decay.

Municipalities in Israel operate more like city-states, with labyrinthine systems of rules and regulations. Zinger argues that there is “a need for regulation about when and how cities can invest in water-sensitive urban design and technologies, and incentives for local councils to participate. There needs to be a supportive mechanism for cities to invest in smart technologies in the public interest.” Despite practical co-operation and technical assistance from Israeli national water bodies such as the Water Authority and Mekorot, there is no clarity as to who is ultimately responsible for capturing and treating urban runoff.

Biofiltration systems address water supply, storm water, road runoff management and drainage, but as there are not always common interests and cooperation between authorities, installation and management of large-scale biofiltration remains a major challenge.

Water and links to urban planning

Due to shortage of available urban land for the growing population cities are building up rather than out, creating a heat-island effect and elevating urban temperatures by approximately 4 degrees Celsius. A lack of open space is deleterious to people’s health by making cities hotter (if anyone is in doubt, find a well-shaded area in a city with trees and grass and notice the temperature difference), and affects emotional well-being. Through the creation of vertical biofilters – green walls – it is possible to regulate temperatures within buildings and outdoors. Large-scale biofiltration with appropriate vegetation will produce potable water forming a micro-climate and a pleasant environment.

Desalination is no longer the panacea to Israel’s water shortfall

Modern times call for sound water planning hand-in-hand with urban planning so that Israel’s buildings and cities can become water sensitive to the benefit of her people and so that Israel can remain at the forefront of water strategies.

The investment of US$800 million in biofiltration would create at least the equivalent amount of potable drinking water as the two proposed new desalination plants, with the added benefits of biofiltration, and without the problems of desalination.  And if the local municipalities would match the government budget to double the investment, the future of Israel’s water strategy and urban planning would indeed be the envy of the world.