Bassem Eid Speaks Out After Death Threat at PCUSA Conference 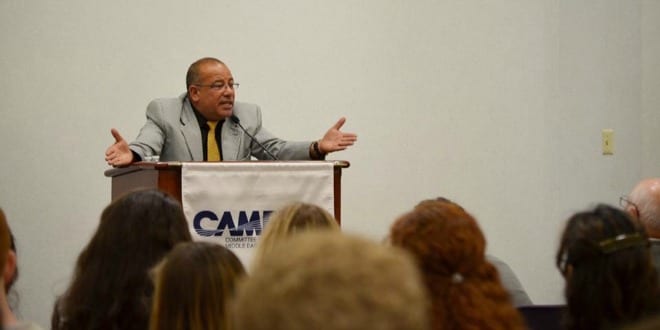 Human rights activist Bassem Eid is no stranger to death threats. Imprisoned in 1996 by Yasser Arafat, Chairman of the PLO and PA at the time, the Palestinian Muslim activist has been attacked before for exposing Palestinian human rights violations, but until today, he has continued to speak out against further violations and anti-Israel bias.

But little did he expect that he would receive yet another death threat at the most recent Presbyterian Church USA General Assembly (PCUSA GA) in St. Louis Missouri from June 16-23.

Eid, a Jerusalem-based political analyst, human rights pioneer and expert on Arab and Palestinian Affairs was born in the Jewish Quarter of Jerusalem under Jordanian occupation at the time. After his release from Palestinian prison, the activist established the Palestinian Human Rights Monitoring Group and resigned as a senior field researcher from B’Tselem, an Israeli Human Rights monitoring organization, after B’Tselem decided not to report on human rights abuses of Palestinians by the PA. Today, chairman at the Center for Near East Policy Research, Eid continues to monitor human rights abuses of Palestinians committed by the PA.

At the conference, 13 anti-Israel resolutions were considered by the Middle East committee, including resolutions ending economic and military aid to Israel as well as a call to cut off dialogue between Presbyterians and Jews who are insufficiently critical of Israel.

Eid attended the conference on June 18 to testify for a resolution that sought to condemn Hamas for militarizing the Palestinian children in the Gaza strip.

“I work with Gazan people every day and have no doubt that they are using people as a human shield,” Eid told Breaking Israel News.

But to Eid’s dismay, the resolution for which he testified did not pass. “PCUSA didn’t condemn Hamas,” said Eid, who claimed, “these Presbyterians were more extremist than many extremists of the Middle East – they are completely disconnected from reality.”

And even worse than that, Eid said, he received a death threat in which another Palestinian Muslim man named Bassem Masri yelled, “I know who you are. I’m going to kill you.”

According to Eid, “During a break, I approached a water cooler and suddenly someone was standing beside me, speaking to me in Arabic telling me he was going to kill me.”

Continued Eid, “I ignored him, but he followed me and on the escalator and again said in Arabic that he will kill me and that I am a traitor and a Zionist collaborator.”

“Collaborator” is an accusation that Hamas has used to justify executing Palestinians in Gaza, noted Eid.

The aggressor followed Eid to his hotel, who had arranged for others to accompany him back to the conference center. After police came for Eid’s statement, they identified the aggressor from his Facebook page. And although Masri received a warning, he was let back into the building nevertheless.

“He seemed to be a strong supporter of Hamas because of some of the videos that were on his Facebook,” maintained Eid, who added that “after police reviewed the videos on his Facebook, they decided there is a case for persecuting.”

While the PCUSA said they would apprehend the aggressor and ban him from the facility, no such action was taken.

The death threat, and its lack of response by PCUSA has upset many, including StandWithUs CEO Roz Rothstein, who called PCUA’s inaction “disturbing,” as well as Dr. Michael Gizzi, an elder in the Presbyterian Church and member of Presbyterians for Middle East Peace, who wrote in a recent Times of Israel article, “in 2018, death threats, intimidation, and harassment are usually taken pretty seriously. Unless, apparently you happen to be a speaker at an event advocating for a group that is slow to criticize Israel.”

Gizzi added that the Church later released a statement that insinuated that it is okay for guests of the Church’s Israel Palestine Mission Network to harass and threaten people.

Wrote Gizzi, “I guess things would have been different if Bassem Eid was a fierce critic of Israel. Maybe in that situation the General Assembly would have taken the threat seriously. But instead, it sided with a thug. It put public safety second, in order to protect a radical who committed a crime, and then proceeded to post it online, all because Bassem wasn’t critical enough of Israel.”

The StandWithUs CEO applauded Gizzi and Presbyterians for Middle East Peace, calling them “Presbyterians of conscience,” for standing up to anti-Israel extremists that were trying to exploit the GA for their political agenda.

Eid also praised the group who invited him to provide testimony, saying, “These people are much more realistic than PCUSA’s leadership. They have been to Israel and Palestine and they are much more aware of the Palestinian demands.”

Gizzi similarly told Breaking Israel News, “Each trip to Israel further convinces me of how misguided the PCUSA activists are in their approaches and biases.”

Eid expressed his disappointment in PCUSA’s lack of response to the death threat and maintained that the West Bank Palestinians’ striving for economic prosperity is often undermined by the political statements of the PCUSA who are “adding oil to the flame.”