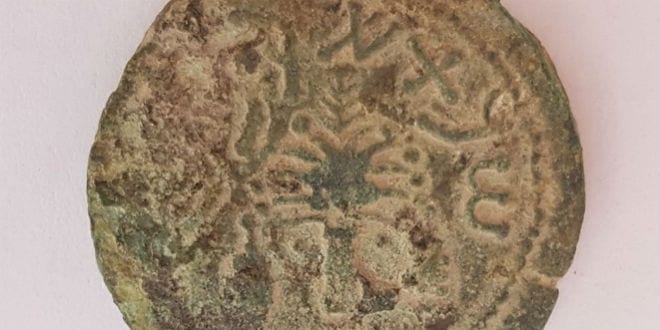 A rare coin minted 1,949 years ago was found last ‎week ‎in a dig in the City of ‎David in ‎Jerusalem.‎

Reut Vilf of the ‎City of David Foundation said the ‎coin, discovered ‎in the sewage system ‎running ‎beneath ancient ‎Jerusalem, dates back to the year 69 ‎CE, the fourth year ‎of the Jewish revolt against ‎Rome and the year in ‎which the rebels despaired.‎

According to Israeli media reports, a cache of ‎bronze coins from that time was found in 2014 in a ‎village near Jerusalem and more were unearthed in a ‎cave by the Temple Mount in 2018, from the second and ‎fourth years of the rebellion.‎

The coin found last week bears an inscription ‎ancient Hebrew lettering reading “For the Redemption ‎of Zion” and a depiction of a chalice. ‎

Its other side depicts the “Four Species” used in ‎the Sukkot holiday — the citron fruit, palm frond, and myrtle and willow branches — and the words “Year Four,” ‎referring to the final year of rebellion against the ‎Romans.‎

‎“The coin was found exactly in the same place that ‎Jews had been hiding in the drainage channel under ‎the street,” noted Vilf. Evidence of the rebels’ ‎attempt to hide under the city includes intact oil ‎lamps and ceramic pots that were found whole in the ‎sewer itself.‎

Interpreting the inscription on the coin, she said, ‎‎“Freedom is an immediate thing, while redemption is ‎a process. It could attest to their understanding ‎that the end was near.”

Eli Shukron, an archaeologist with the Israel ‎Antiquities Authority, said that in all likelihood, ‎the coin could have fallen into the drainage system ‎through cracks of the stone-paved road.