Home » Coming To Terms With History of Christian Antisemitism 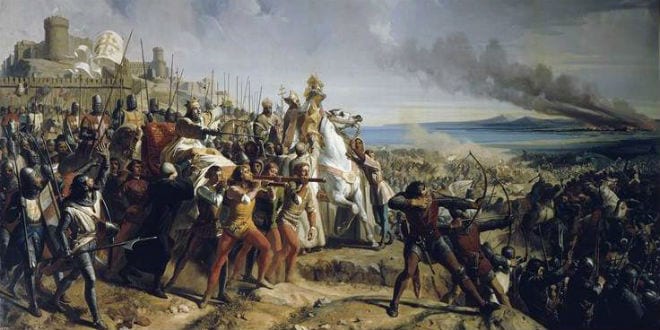 He told Breaking Israel News, “​If a large number of Christians were to become aware of the extent of the damage done to the Jews by their Christian forefathers, the relationship between [Jews and] Christians would have to change, because the basis for much conversation would change.”

While researching the Blood Moon phenomenon in 2013, O’Dell chanced upon historic details of the Christian persecution of Jews.

“I spent 25 years working daily with Israeli Jews, and visited Israel over 30 times, without ever knowing the massive extent of Jewish persecution by Christians. All I really knew about was the Crusades. I had no idea about Martin Luther’s role in the Holocaust, for instance, and I certainly didn’t know about the deplorable history of the church since the time of Constantine,” O’Dell wrote in a recent essay on the Root Source website.

He created a spreadsheet, “to catalog specific events of persecution. Every time I came across a new location and date of Jewish persecution, I would drop it into a spreadsheet. I would write a few notes about the event including the number of people affected (or killed) and then move on,” O’Dell explained in a follow-up essay.

Eventually, he accumulated a record of 500 specific incidents of Christian persecution of Jews throughout history; incidents that included pogroms, lynchings, riots, forcing Jews to wear special clothing, expelling Jews from a country, antisemitic writing from Church Fathers, burning synagogues with Jews trapped inside, forced conversions, accusing Jews of killing Christian children to use their blood to make matzah and the rape and murder of Jews.

This awareness shocked him. In his own words, “I was undone,” both by the violent history of Christians toward the Jewish people and also by the fact that he had never learned this history.

Then O’Dell was contacted by Ray Montgomery, a Root Source subscriber from New Zealand. “Like me, he too had come to grips with the full extent of Christian persecution against Jews. Like me, he had compiled lists of events from his various research. Like me, he too had been undone by what he learned. Ray wondered if now might be the time that God could be calling Root Source to ‘do something regarding our Christian past’ on the 9th of Av this year.”

Jews refer to the 9th day of the Hebrew month of Av as Tisha B’Av. It is observed with a 25-hour fast and by the public reading of Eicha, the Biblical Book of Lamentations, which details the destruction of the First Holy Temple. Tisha B’Av is the date on which Jews commemorate multiple tragedies in Jewish history, including the Expulsion from King Ferdinand and Queen Isabella’s Spain, in 1492. It is a sad and mournful day.

Say to all the people of the land and to the Kohanim: When you fasted and lamented in the fifth and seventh months all these seventy years, did you fast for my benefit? Zechariah 7:5

O’Dell and Montgomery decided to encourage Christians to use Tisha B’Av, which falls this year from sundown July 21 until sundown July 22, as a time to contemplate the brutal history of Christian antisemitism. To that end, Root Source is offering to make the information both men have catalogued available to any Christian who is prepared to face it.

O’Dell asks his fellow Christians the starkly challenging question, “Would you be brave enough to take this list in one hand, and perhaps the Book of Lamentations in the other, and place yourself in the attitude of weeping for what we Christians have done in our history, by owning our past?”

Gidon Ariel is O’Dell’s Orthodox Jewish co-founder of Root Source. He told Breaking Israel News, “I would say that most Christians focus on a here-and-now relationship with Jesus. Discovering horrific actions done by Christians triggers strong feelings of cognitive dissonance, sometimes to the point of denying that the perpetrators were even Christian! But for those Christians who come to terms with this dark side of history, their history, this naturally has a big impact of their sympathy for Jews. I have seen many Christians become so appalled by this history, they can barely have a conversation with a Jew.

“I think that learning this history, and working out one’s feelings upon discovering it, and then daring to encounter a Jew and discuss it, is a very maturing process and exposes both sides to vulnerability and intimacy that are strong components of a serious relationship.

“Regarding how all of this is [connected to] geula (End of Days), I think that anything that brings all of God’s children closer together, especially related to Jews, God and compassion for others, is by definition part of geula.”

O’Dell concurs that a wider appreciation of this history among Christians is connected to geula, but suggests that Christians yet have work to do. “Yes this is connected to the End of Days,” he said, “but if we don’t heed the call to get right with God concerning our relationship and perception of the Jews, then who knows [whether] the Messiah’s coming might be further delayed. I believe this MUST be one of the pieces that has to fall into place [first].”

Reflecting on the response from other Christians to this challenge, O’Dell told Breaking Israel News, “The strongest encouragement comes from individuals who have already done what I am proposing doing. They know that there is a work that God does in the heart by taking on this challenge.

“Others are overwhelmed by the enormity of the need, and rightly see that anything we might do here at Root Source would, without a miracle, may be only a drop in the bucket. However, I believe that is God’s problem. I think we have to do what is in front of us and trust that each step we take in the right direction ultimately makes a difference. It’s in God’s hands.

“Others are just grappling with the idea of ‘what it means’ and what it would look like to do this task. Many others are just quietly ruminating on this idea.

“I think all these reactions are perfectly valid.​ It is a weighty decision to do something like this.

“But I can tell you that that experience five years ago changed the whole vector of my interaction with the Jews. It got me to come to Israel in a different way, and for a different purpose. And it got me positioned to meet Gidon [Ariel] in Jerusalem, to hear his idea for Root Source, and to help him get his idea up and running.  Before that I was more interested in making my own ideas successful, but now I have found a much higher joy, and have made so many wonderful new friends on the way. I want other Christians to have the joy that God has given me. That is what drives me to push forward on this very difficult topic,” he concluded.

To receive the material O’Dell and Montgomery compiled, complete the form at the bottom of this page.