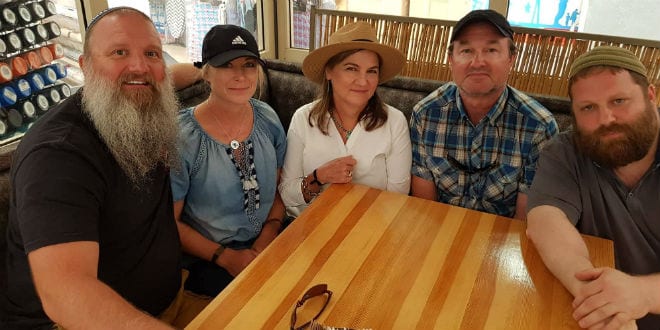 Four non-Jewish Americans made a special stop on their tour of Jerusalem: ascending to the Temple Mount, and in front of a Bet Din (rabbinic court) took an oath to obey the Seven Noahide Laws incumbent on all of mankind.

Wayne Craig and his wife, Lisa, were touring Israel with Staci and Mike Mattlage, all from Texas. On Wednesday morning, they planned on ascending the Temple Mount accompanied by Rabbi David Katz, author of Laws of Ger Toshav: Pious of the Nations. Rabbi Katz had taught them Torah on occasion. When they entered the Temple Mount compound, they met Rabbi Eliyahu Veber who leads the Beit Midrash at the site.

Rabbi Katz introduced the four to Rabbi Veber, explaining that they were non-Jews who kept the Noahide laws. Veber suggested that the four take a vow to uphold the Noahide Laws while on the Temple Mount – and they enthusiastically agreed. A  similar group of Texans had taken the same vow last year. Rabbi Veber quizzed them on the seven laws with which they were intimately familiar.

The Noahide Laws are not explicitly mentioned in the Bible but are listed in the Talmud (Tractate Sanhedrin 107a) as being incumbent on all of mankind.They are:

In addition to the Seven Noahide Laws, the four accepted upon themselves not to include a shituf in their belief. Shituf is a theological concept meaning “a partner”, more specifically, a partner or additional divine figure other than the God of Israel.

“We don’t define ourselves as Christian and no longer believe in Jesus,” Mike explained to Breaking Israel News. “We are ger toshav  and are connected to Israel.”

This classification was formally recognized by the Chief Rabbinate of Israel in 2014 in connection with the current laws pertaining to the Sabbatical year, though it was considered theoretical at the time.

Rabbi Katz explained that  in biblical times, there were hundreds of thousands of ger toshav, people who were part of Israel but who had not converted to Judaism.

“Converts are Jews,” Rabbi Katz said to Breaking Israel News. “Anyone who was an idolator could not live in Israel or be connected with Israel. A ger toshav has rejected any worship that is unacceptable according to Torah law, but he is not a Jew.”

Rabbi Veber praised the four, saying that they were bringing about the prophecy of Isaiah.