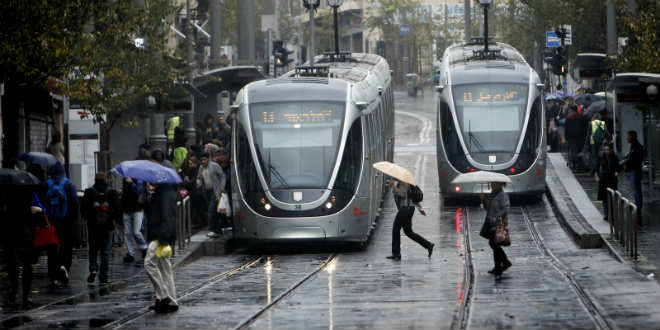 A remarkably unseasonal downpour drenched parts of Israel,  leading many Jews to turn their eyes to heaven in search of understanding: was this a blessing or perhaps the opposite. As Joshua Wander watched the rain fall on the Temple Mount, the conclusion he came to was decidedly uncomfortable.

Israel is an arid country with about 70 percent of the average rain falling between November and March. June through August are often rainless. This is reflected in the daily prayers in which the prayer for rain is inserted at the end of the autumnal holiday of Sukkoth and continues until the spring holiday of Passover. This has its roots in the agricultural basis of the religion and unseasonal rain can damage crops.

The Bible describes the weather in Israel as a result of the Jews’ relationship with God.

If, then, you obey the commandments that I enjoin upon you this day, loving Hashem your God and serving Him with all your heart and soul, I will grant the rain for your land in season, the early rain and the late. You shall gather in your new grain and wine and oil Deuteronomy 11:13-14

When heavy rain fell, accompanied in places by thunder, many were reminded of this verse and wondered if this rain signified divine displeasure. The weather forecasts were accompanied by flash flood warnings, a reminder that in April, similar unseasonal rains generated a flash flood that killed ten teens.

Wander, a resident of the Mount of Olives, was watching the rain fall on the Temple Mount. He had never seen rain in Israel so late in the summer season. As a religious Jew, he searched for a reason for such a strange phenomenon and he thought of what was taking place 25 miles south of where he was standing. In Netiv Ha’avot, a neighborhood in the city of Elazar in Gush Etzion, 15 homes were being destroyed.

“It just seemed so clear that Hashem (God, literally ‘the name’) was crying,” Wander told Breaking Israel News. “I am going through a roller coaster of feelings because of what is happening there. Families are being torn from their houses.”

Rabbi Yosef Dayan, a member of the nascent Sanhedrin and a descendant of King David, agreed with Wander.

“We pray for rain in its season and when it comes out of season, this is surely a sign of divine intervention,” Rabbi Dayan told Breaking Israel News. “It is impossible to say that we know why these things happen, but the destruction of Jewish homes in Netiv Ha’Avot is very serious. We have much to be happy for in Israel today but there are so many things we need to pay attention to. Yes, Netiv Ha’Avot is awful and it is good to think that God is crying because Jews are being made homeless. But the situation on the Temple Mount is no better. And that is also our fault.”

The rabbi compared the situation on the Temple Mount to a prophecy in Haggai.

Is it a time for you to dwell in your paneled houses, while this House is lying in ruins? Haggai 1:4

“Building up the land is not enough if we lose sight of why we are here,” Rabbi Dayan said. “Jerusalem, Har HaBayit (the Temple Mount), is why it is important to fight for Netiv Ha’Avot. It is all one.”