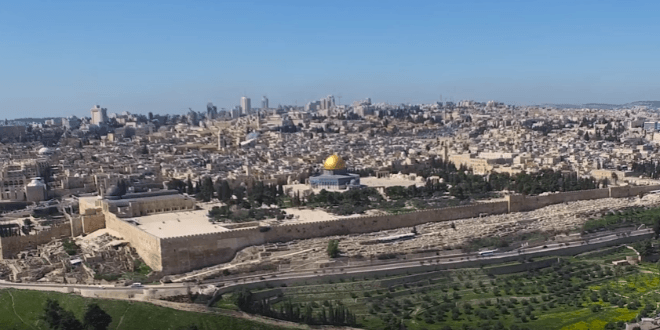 Rabbi Yisrael Ariel ascended the Temple Mount on Wednesday to commemorate 51 years since he had stood there as a young man, guarding the site after he and his comrades-in-arms had conquered the holiest site in Judaism.

In 1967, Rabbi Ariel was a 28 year-old yeshiva (religious seminary) student in Jerusalem, married and with two small children. In the tense buildup to the Six Day War, Ariel was called up as a reservist in a paratroopers unit and began training for a parachute insertion into the Sinai Desert. When the war broke out, his unit was loaded onto buses that took them not to the airfields but to Jerusalem itself. They fought their way to the Rockefeller Junction next to the Rockefeller Museum, where they camped overnight. The next morning, a mistaken IDF artillery barrage killed 13 Israeli soldiers. Later that day, his unit fought their way into the Old City and, after a firefight on the Temple Mount, succeeded in conquering the site. Ariel was stationed on the Temple Mount as the rest of his unit continued down to the Western Wall.

On Wednesday, Rabbi Ariel ascended the Temple Mount and recounted his experiences from June 7, 1967.

“I’m not going to describe what others did but there is a big difference between a few people sneaking into the Temple Mount and conquering it,” Rabbi Ariel told a group of Jews who ascended to the site to commemorate the occasion.

“[The government and army] will tell you they searched here and that they only found one rifle in one of the attics. I know what I saw here with my own eyes: cannons, mortars, piles of shells, jeeps, a whole army camp with tents. This was an army base for the Jordanian army. This was their camp.

“So when [IDF General] Mordechai (‘Mota’) Gur’s forces came here, we had to fight. To my sorrow, many [Jordanian soldiers] were also killed. They were killed right here. Jews were not killed here, but there were battles on the Temple Mount against the Jordanians who were here.”

“So there were battles on the Temple Mount. There was a lot of shooting. Jordanians were killed here, and after the battle, they were left here.”

“Not only that but I saw with my own eyes how 2,000 soldiers of the Jordanian Legion surrendered. Who did that ? Our group went from house to house gathering them, and brought them to the Temple Mount; 2,000 Legion men.”

“When Jerusalem surrendered, Ruhi al-Khatib, the Jordanian governor of Jerusalem, came to submit a surrender letter to the Jerusalem Brigade. He snuck in and snuck right back out. He came to our division commander, ‘Mota’ Gur. He said to him, ‘Here is our letter of surrender’. He came along with all Jordanian dignitaries. [ Gur] said to him, ‘You are free’, and sent them away.”

“I thought that a real military rabbinate should have in its storehouse what we have in the institute today: the Menorah, vessels for the Temple, clothes for the Kohanim and the altar, all ready in crates in the basement, so that when we reach Jerusalem there will be trucks that unload everything, and we can get to work. So it’s true that we usually improvise after something has happened, but in this case we did not even have the beginning of what was needed. I asked myself why that was, and that is how the first ideas were born.”

Rabbi Ariel is a member of the nascent Sanhedrin, an attempt to re-establish the Biblically mandated court of 71 elders.