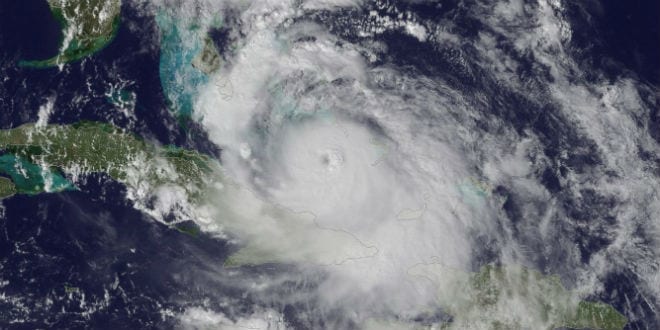 As the 2018 hurricane season begins with dire predictions evoking images of last year’s disasters, one rabbi suggests a backdoor solution to changing God’s will before the storms hit.

“The globe is telling us that we need a global warming of human relations,” said Rabbi Shimon Apisdorf, a prominent Jewish educator and bestselling author, to Breaking Israel News. “This may actually affect the weather.”

The 2018 hurricane season began on Friday, leading people on the Atlantic seaboard to turn their eyes skyward and wonder if the next few months will be a repeat of last summer’s near-apocalyptic nightmare. Three major hurricanes made landfall last summer, leaving over $282 billion in damages in their wake and making 2017 the costliest hurricane season in history.  following a dramatic total solar eclipse that transversed the continental US. Last September, Hurricane Maria killed more than 4,600 people in Puerto Rico.

Although it is impossible to predict weather with any certainty, a taste of things-to-come came last Tuesday when Hurricane Alberto hit North Carolina, killing five people.

Looking forward, the Tropical Storm Risk (TSR) Consortium, a group of three major weather forecasting institutions, predicted an above-average season in 2018 with seven hurricanes, three of them major. Due to recent developments in atmospheric conditions, TSR revised their forecast last week to four hurricanes, one of them major.

But even the optimistic climatologists are concerned about the future with many warning that global warming may already be making storms more extreme.  Scientists have noted a dramatic increase in hurricane precipitation, which they credit with drastically increasing Hurricane Harvey’s already extreme rainfall. Researchers attribute this increased rainfall in tropical storms to human-induced atmospheric changes (global warming).

A study into the effects of global warming on hurricanes published in Science in 2016 predicted that in the future, this phenomenon will be most pronounced in bad hurricanes, making them even worse.

“We thus expect tropical cyclone intensities to increase with warming, both on average and at the high end of the scale, so that the strongest future storms will exceed the strength of any in the past,” the study concluded.

This increase in the intensity of tropical storms is so significant that a group of climate scientists at a conference in New Zealand in February suggested adding a sixth category to the Saffir-Simpson Hurricane Wind Scale, which until now has rated hurricanes on a scale of one to five, topping out at a mere 200 mph wind-speed. New Zealand’s climate change minister, James Shaw, referred to Cyclone Winston in 2016, the strongest on record in the southern hemisphere.

“The international cyclone rankings don’t go higher than category five. The only reason it wasn’t a category-six cyclone is because we don’t have a category six, but we might need one in the future,” Shaw told the conference.

There are currently no scientific methods for influencing the weather, and international conventions have struggled in vain to find solutions for climate change. But Rabbi Apisdorf suggested a course of action that is within reach and just may influence the course of catastrophic storm systems.

“Global warming is a surface level headline that is telling us precisely what we really need: a deep spiritual global warming,” Rabbi Apisdorf told Breaking Israel News, explaining that sometimes a tragedy can be God’s way of bringing something out from the human heart.

“The hurricanes, for all their tragedy and suffering, gave us the opportunity to come together, to show a deep level of caring Hashem does not normally require from us,” Rabbi Apisdorf said. “These awful circumstances draw out from us things we didn’t know were there, a warming of our hearts.”

The rabbi cited cases of Israelis flying to Houston to help restore churches, driving across the US to deliver diapers to families made homeless by the storms and IDF medics and rescue teams flying to Mexico after earthquakes.

“We don’t want to see it happen that way, but it is a blessed thing that is does happen,” the rabbi said. “We need to warm up towards each other before the volume is increased to make us hear the message.”

Skeptics may scoff at Rabbi Apisdorf’s suggestion that actions and even intentions can prevent catastrophic hurricanes or global warming. But it has been postulated in meteorological science that tiny and oblique efforts can affect entire weather patterns. Edward Lorenz, a mathematician and meteorologist, discovered that small factors could have drastic effects on regional weather conditions.

“One flap of a sea gull’s wings would be enough to alter the course of the weather forever,” Lorenz wrote in his 1963 paper, titled Deterministic Nonperiodic Flow. “The controversy has not yet been settled, but the most recent evidence seems to favor the sea gulls.”’

Lorenz’s theory, known in popular culture as “the butterfly effect,” is generally accepted to be true and has been demonstrated experimentally.

“If this is true of infinitesimal physical forces, how much more so for the human consciousness when expressed in words and actions? This is even more true when we attach ourselves to the divine will,” Rabbi Apisdorf said.

Rabbi Apisdorf emphasized that human will not only had the power to change the weather but also the ability to change the divine will in bringing the final redemption. He the concept of B’Eeta Achishena (I will speed it up in its time) taken from a verse in Isaiah.

The smallest shall become a clan; The least, a mighty nation. I Hashem will speed it in due time. Isaiah 60:22

The concept of B’Eeta Achishena  is used by rabbis and Jewish theologians to describe the tension between God’s greater plan in light of Man’s will and actions. This is especially relevant in reference to the Messiah and Man’s actions affecting when the Messiah will arrive.

“Man can actually change the divine plan by doing teshuva (repentance),” Rabbi Apisdorf said. “It is a spiritual butterfly effect. It just may be that a global warming of our hearts can preempt the effects of atmospheric global warming.”

But Rabbi Apisdorf had a specific vision for what this “global warming of hearts” would entail.

“This doesn’t mean just showing up at synagogue or church,” he cautioned. “It is us, as people, rediscovering our family-ness, our deep essential connectedness to God and to each other.”