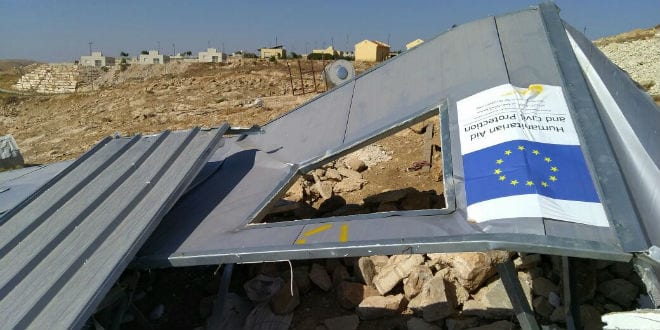 In the past three years alone, at least €42,000,000 (nearly $50 million, or NIS 175 million), half of which was contributed by the European Union, has been donated for the express purpose of facilitating Arab control over Area C. (This includes only sums reported publicly by the Palestinian Authority, the Union of Agricultural Work Committeesand/or the foreign governments and organizations involved. In fact, the undisclosed sums that have been donated for this purpose most likely far outpace the reported sums.)

On Sunday, Regavim presented hard, shocking data to the Knesset Foreign Affairs and Defense Committee in a hearing convened by the Subcommittee on Judea and Samaria headed by Knesset member Moti Yogev. The hearing—attended by Knesset member Sharen Haskel, Knesset member Bezalel Smotrich, and representatives of the Ministry of Defense, the National Security Advisor, and other key government and security personnel—was dedicated to a problem highlighted for quite some time (see https://bit.ly/2JpwQZN for earlier discussions of the problem).

Said Yishai Hemo, field coordinator for Judea and Samaria at Regavim: “In light of the scope of the P.A.’s activities and the massive funding that enables this program, the Civil Administration must treat agricultural land seizure as a phenomenon of strategic importance, and not merely as a localized violation of law. Any other attitude toward this extensive activity means that either the authorities are burying their heads in the sand, or they are guilty of dangerous negligence.”

At the hearing, some very serious charges were leveled regarding implementation of government policy: Despite the government’s unequivocal policy regarding Area C in Judea and Samaria as being under full Israeli jurisdiction, in practice this policy has not been implemented by the body responsible to do so: the Civil Administration.

Knesset member Moti Yogev, Subcommittee Chairman, noted that “in the last few years, we have raised the alarm in the Subcommittee on Judea and Samaria of the Knesset Committee on Foreign Affairs and Security, but have received very sparse practical response. For the most part, the defense establishment, the Coordinator of Government Activities in the Territories (COGAT) and the Civil Administration have ignored the issue.”

“Civilian bodies such as Regavim, which is dedicated to the preservation of State land in the Galilee, the Negev, the Jordan Valley, and Judea and Samaria, have brought the problem to the attention of the Committee, and have acted, for all intents and purposes, as the information-gathering arm of the Committee,” he continued.

“Enforcement and preventative measures, as we have reported in the past to the Foreign Affairs and Defense Committee, as well as the government’s efforts to regulate and organize Bedouin settlement, have been extremely limited, to the point of being devoid of practical results, including the failure to carry out the Supreme Court’s order to evacuate the school at Khan al Akhmar in the Adumim Bloc. Similarly, the activities of the State’s Attorney for Judea and Samaria have been limited and one-sided in terms of issuance of delimiting orders, orders regarding obstructive utilization of land and more to the detriment of Israel’s interests in Judea and Samaria. The ineffectuality of the judicial system, and its support for non-enforcement of the law, has been a critical factor in the loss of Israel’s control over Judea and Samaria.”

“The policy of the Israeli government is clear: Area C in Judea and Samaria is under the jurisdiction of the State of Israel. In practice, however, this authority has not been exercised or actualized by the body responsible to do so: The Civil Administration has turned a blind eye, failed to collect data, failed to enforce the law and even granted ex post facto approval for illegal structures, contravening the policy and interests of the State of Israel in these regions. This may be a very serious accusation, but unfortunately this is the reality,” stated Yogev.

After pressure exerted by Regavim, the Ministry of Defense and the Ministry of Foreign Affairs both admitted that these illegal activities are part of an organized, systematic phenomenon and not random infractions of the building code.

The Committee, which intends to involve Israeli Prime Minister Benjamin Netanyahu in this issue, demanded that the Ministry of Defense, which is responsible for and directly oversees COGAT, the Civil Administration and the IDF’s Central Command, present a program, supported by the Ministries of Justice and Finance and the Prime Minister’s Office, to block Palestinian efforts to establish control over Area C—efforts that violate the Oslo Accords, as well as Israeli law.