Torah Codes: The Dark Angel of the Left-Wing Battling Messiah 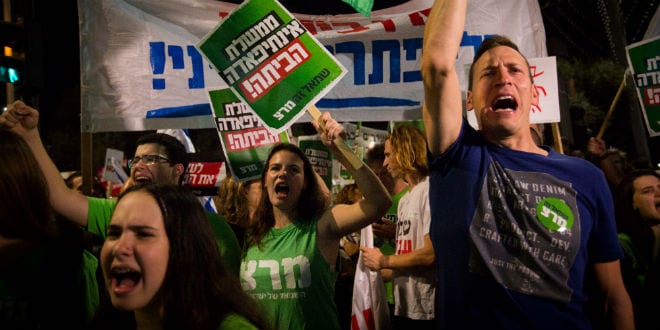 According to Rabbi Matityahu Glazerson, a Torah Codes expert, the political conflict between the left-wing and the right-wing is a mystical war that has Biblical roots. According to the rabbi, hidden clues in the Bible indicate that the Left-Wing will be defeated this year as a precursor to the Messiah.

As in the US, the battle lines in politics are drawn according to religious observance. Rabbi Meir Mazuz, a leading Sephardic Haredi (ultra-Orthodox) rabbi in Israel who is the spiritual head of the Yachad political party, gave a speech last week in his yeshiva (Torah Seminary)  of Kissei Rachamim (Seat of Mercy) in Bnei Brak. In the lesson, the rabbi described the imminent demise of the political left-wing and the corresponding rise of religion.

“Once, it was not considered ‘modern’ to speak about God,” Rabbi Mazuz said. “Now, a lot of water has flowed (a lot has changed), and people speak about God. The Left is going down and nothing of it will remain. Slowly, everyone will be speaking about God, and the crazy leftists will remain outside in their own camp. The tide of the times is to return to faith. People are returning to faith, even someone who does not say so explicitly – he has something in his heart.”

“It is not by chance that the left-wing is named as they are,” Rabbi Glazerson said to Breaking Israel News. “In Kabbalistic (mystical) terms, the left signifies din (judgment), which is characterized by limitation, or contraction.”

Rabbi Glazerson explained this quality of contraction as it was exhibited by the erev rav (mixed multitude) in the Bible.

Moreover, a mixed multitude went up with them, and very much livestock, both flocks and herds. Exodus 12:38

“The erev rav were responsible for the sin of the Golden Calf. Rather than worship the God of Israel who has no physical form but fills the world with spirit, they wanted a strictly material god, a smaller god that could be contained. This is din, the left wing in Kabbalah that is contraction and limiting. But with the Golden Calf, they were trying to limit God. This is precisely the materialist philosophy that has taken over the universities.”

“The Zohar (the seminal source for Jewish mysticism) states that in the end of days, the erev rav will be the heads of Israel, ruling over the courts and learning institutions, even over Torah learning,” Rabbi Glazerson said. “Elohim, the name for God that represents judgment, also represents nature. They have taken God out of nature.”

Rabbi Glazerson found clues in the Bible that indicate the demise of the left-wing is imminent as a precursor to Moshiach (Messiah). Using a Torah program that searches for equidistant letter sequences in the Bible, Rabbi Glazerson searched for the words “erev rav”, “left” and “Moshiach.”

The rabbi also searched for “Amalek,” a Biblical nation that has become the archetypal enemy of Israel, since he found an implicit link between all these concepts. Amalek is the grandson of Esau. His descendants formed the nation of Amalek that attacked Israel as they left Egypt. The attack was particularly despicable in that it targeted the weaker members of the people, children and the elderly.

He found all of the words concentrated in the 25th chapter of Exodus.

Rabbi Glazerson found the words “ketz smole” (“end of the left”) and “ketz erev rav” (end of the mixed multitude) and “Amalek”. All these phrases were adjacent to the letters tav (ת), shin (ש), ayin (ע), chet (ח). The numeric equivalent of these letters is 5778, the current year according to the Hebrew calendar.

“This is significant, showing that the left wing is connected to Amalek and the mixed multitude,” Rabbi Glazerson explained. “And this year will mark the beginning of the end of the left-wing as a first stage to Moshiach.”

“King David’s successful war against the Amalekites will be replayed in the end of days as a part of the Messiah from the house of David,” Rabbi Glazerson explained, emphasizing that the code indicated that the process leading to the end of the left-wing would begin this year.

The word smole (left) has a hidden connotation in Hebrew connecting it to ‘Samael’, the main archangel of death. The rabbi explained that in Kabbalah (Jewish mysticism), the letters sin (ש) and samech (ס) are interchangeable. This exchange of letters makes the word smole (שמאל) (‘left’) identical to the name Samael (סמאל).

Rabbi Glazerson said that the left-wing combines the forces of Samael with Amalek.

“Samael is the angel of Amalek. The gematria (Hebrew numerology) of Samael, 131, plus the gematria of Amalek, 240, totals 371,” Rabbi Glazerson pointed out. “This precisely equals the gematria of smole (left). The left takes its strength from both Samael and from Amalek.”

“Anything that lessens life in the world is against Torah and against Moshiach as per the contractive nature of the left side of din,” Rabbi Glazerson said. “The left-wing promotes these things, like abortion, homosexuality, and euthanasia. They condemn the IDF in its battle against groups that openly call for death. The left claims they are doing it out of love and caring, but it is really because they draw their essence from the left side.”

“This attachment to lifelessness has to be overcome for the Moshiach to come,” Rabbi Glazerson said. “The Moshiach will bring t’chiyat ha’matim, (resurrection of the dead), a miraculous increase of life.”