Netanyahu Will Hand Scepter to Messiah Son of David

Home » Netanyahu Will Hand Scepter to Messiah Son of David 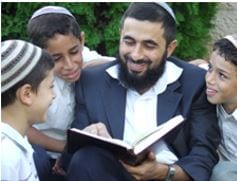 Rabb Levi Sudri, an award-winning Bible expert, makes the case that Israel’s prime minister, Benjamin Netanyahu, is the reincarnation of the biblical figure Jonathan, the son of King Saul, who has returned in order to fulfill his promise of helping David bring in the Messiah.

Among his many accomplishments, Rabbi Sudri was crowned Chatan Hatanach (the Torah’s bridegroom), winning first place in the Israeli National Bible Quiz for adults in 2015. He uses his deep understanding of the Bible to understand current events.

“The Bible has everything in it and just as God is eternal, his word is eternal, containing not just the past but the present and the future as well,” Rabbi Sudri told Breaking Israel News. “If it were not so, there would be no reason to write it down for future generations.”

As an example, Rabbi Sudri pointed out that Jonathan was already acknowledged that he would not inherit the kingship and that David would be king.

He said to him, “Do not be afraid: the hand of my father Shaul will never touch you. You are going to be king over Yisrael and I shall be second to you; and even my father Shaul knows this is so.” I Samuel 23:17

‘But this never came about,” Rabbi Sudri points out. “Jonathan never served as David’s second. It is impossible that something should be written in the Bible and not happen. So if Jonathan said he would serve as David’s second, it must be something that is destined to happen in the future.”

The rabbi cited the Shem M’Shmuel, a book of Torah interpretations as taught by Rabbi Shmuel Bornsztain, the second Sochatchover Rebbe (spiritual leader) from 1910-1926. The book of his teachings was published posthumously.

The Shem M’Shmuel discusses the Jewish tradition of a two-stage process for Messiah. The first stage, referred to as Moshiach ben Yosef, is a practical, mundane process that includes the ingathering of the exiles and building up of the Land of Israel. The second stage is a miraculous process which includes the reestablishment of the Davidic Dynasty and the completion of the Third Temple.

“It is written in the Shem M’Shmuel that in the future, Jonathan will come in the reincarnation of Moshiach ben Yosef (Messiah from the house of Joseph), and it is in the end-of-days that he will serve as the second to the Moshiach Ben David (Messiah from the house of David), which will be the reincarnation of David. At that time, he will fulfill his promise to serve as David’s second in command.”

“Even within Moshiach ben Yosef, there are two divisions,” Rabbi Sudri said. “There is a leader in the material world. Netanyahu is clearly fulfilling this function. In addition, there is also a corresponding spiritual Moshiach ben Yosef whose function is to prepare the spiritual groundwork, to make the world ready to receive the much more powerful light of Moshiach ben David.”

“It is very clear that we see in Prime Minister Benjamin Netanyahu that he is fulfilling his destiny as Moshiach ben Yosef, that is to say, the reincarnation of Jonathan. The name ‘Netanyahu’ (נתניהו) is composed of the same letters as the name, “Jonathan (יהונתן).” It is also significant that the Prime Minister’s older brother, who was killed fighting haters of Israel, was named “Jonathan.”

Rabbi Sudri stated that as Prime Minister, Netanyahu is performing all the practical functions expected of Moshiach ben Yosef. As a former commando, Netanyahu personifies the Biblical Jonathan as well.

“Just as Jonathan fought the Amalekites before David, in the end-of-days it will be the function of Moshiach ben Yosef, or the reincarnation of Jonathan, to battle Amalek before Moshiach ben David,” Rabbi Sudri said. “Netanyahu is fulfilling this role by battling the enemies of Israel. When this battle is complete, he will pass the scepter to Moshiach ben David.”

Rabbi Sudri referred to Netanyahu’s close relationship with Rabbi Menachem Mendel Schneerson, the late Rabbi of the Lubavitch Hasidic movement known by his followers simply as “the Rebbe.” In 1990, while serving as a member of Knesset, Netanyahu visited “the Rebbe” and requested a blessing. The Rebbe admonished Netanyahu, saying “The Moshiach still hasn’t come. Do something to hasten his coming.”

“Rabbi Schneerson told Netanyahu that he would give the scepter to the Melech HaMoshiach (Messianic king, i.e. Moshiach ben David),” Rabbi Sudri said.

“In any case, it is necessary to honor leaders as the embodiment of the nation,” Rabbi Sudri said. “It doesn’t matter who they were before they were leaders or what you think of them personally. As soon as they become leaders, they personify the relationship between the nation and God and are fulfilling a high function.”

The rabbi cited Proverbs to illustrate the divine element implicit in national leadership.

Like channeled water is the mind of the king in Hashem’s hand; He directs it to whatever He wishes. Proverbs 21:1

Rabbi Sudri emphasized that this identification of Netanyahu as Jonathan is a matter of conjecture.

“His role in the process is definitely worth considering but it still remains to be seen if he will fulfill this potential,” Rabbi Sudri said.