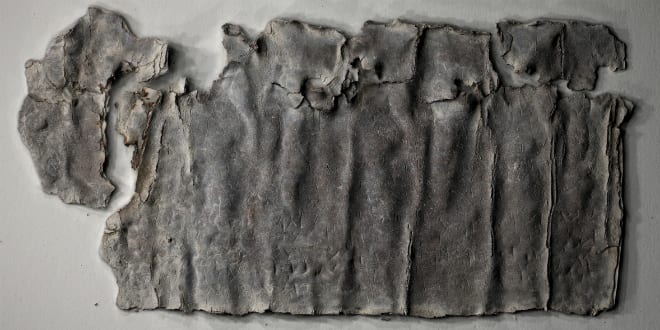 A scroll from the fifth century made of thin lead and discovered in the 1930’s in Turkey has finally been deciphered, and its message is shocking: An amulet written in Aramaic, it refers to the Biblical story of Balaam, and researchers believe it was used by a Jew to curse opposition chariot racers.

The scroll made of thin lead was discovered buried in the Hippodrome in the city of Antioch some 70 years ago by researchers from Princeton University.  It remained rolled up, its message hidden away, until two years ago when a project from Cologne university unrolled it thinking it was a Greek-language amulet, a fairly common practice of the time.

Upon closer inspection, the researchers discovered that the 3.5-inch x .8-inch sheet of metal was inscribed with Hebrew letters. They turned the project over to Tel Aviv University doctoral student Rivka Elitzur-Leiman who is studying Jewish magical amulets from the 4th-7th centuries for her dissertation. Using Reflectance Transformation Imaging (RTI), a technology which takes images in different lighting and from different angles, Elitzur-Leiman was able to decipher the inscriptions.

She identified the inscription as an Aramaic dialect written with Hebrew letters and used by Jews. The content, dealing with the Biblical story of Balaam and containing the Hebrew name of God (YHWH), seemed to confirm her theory.

“The curse calls upon the angel who stands before Balaam’s donkey to block the horses of the opposing team,” Elitzur-Leiman told Breaking Israel News. The hex also calls on God to cause the “Blue Team” horses to “drown in the mud.”

Many such scrolls from that period exist, and cursing chariot races and scrolls used for hexing horse races were fairly common since it was a popular sport in the Byzantine era. But to-date, such scrolls have only been found inscribed in Latin or Greek. This is the only example found of such a hex scroll that can be attributed to Jews.

Parts of the inscription were indecipherable as a nail had been driven through the metal to intensify the effects of the curse. Elitzur-Leiman explained that lead was used for hexing. The metal scroll was then buried in the soil where the race was being held, and the horses passing over it would activate it. Gold, silver or brass were used for amulets that generated blessings.

“The amulets were generally placed in cloth containers and worn on the body,” Elitzur-Leiman explained.

“Love amulets were also made from lead as they were considered a hex since they were particularly aggressive,” she said. “For example, the hex might try to prevent a woman from eating or drinking until she fell in love with a certain man.”

“Even though many rabbis object, they are still used by some Jews to this day,” Elitzur-Leiman said, citing examples of amulets from the Talmud. The phenomenon is so common to Judaism that is the subject of Elitzur-Leiman’s doctoral thesis. “They were used for many purposes including protection from the ‘evil-eye’, chasing away spirits and even success in court cases. They frequently contained verses from the Bible or Psalms.”

“Chariot races were very much like modern sporting events with fans getting very emotionally involved,” Elitzur-Leiman said. “Just as modern sports fans go to great lengths using good luck charms and other superstitions to help their team, chariot fans did the same in ancient times.”

“It seems clear that the Torah sages frowned upon such hexes and charms, and horse racing in particular, was censured,” Elitzur-Leiman said. “But here we have proof that even Jewish fans used curses against their competition.”