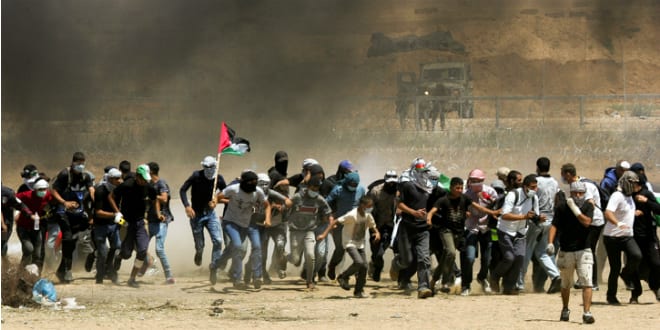 “Hamas called it a ‘peaceful protest,’ and much of the world simply fell for it,” Manelis wrote in an op-ed published in the Wall Street Journal.

Indeed, the IDF was forced into a predicament with the responsibility to fend off approximately 35,000 rioters who took part in violent attempts to penetrate into Israel through the Gaza security fence.

“The (IDF) had precise intelligence that the violent riots were masking a plan of mass infiltration into Israel in order to carry out a massacre against Israeli civilians,” Manelis stressed.

Even more explicit and descriptive than intelligence gathered by Israel were the very words of Hamas officials.

“On April 6, the Hamas political leader, Yahya Sinwar, stated: ‘We will take down the border [with Israel] and we will tear their hearts from their bodies,’” Manelis noted.

“On Facebook Hamas posted maps for their operatives showing the quickest routes from the border with Israel to Israelis’ homes, schools, and day-care centers near the border,” he added. “Does that sound like a peaceful protest to you?”

Manelis noted that Hamas officials have admitted to the terrorist organization’s campaign of deception.

“On May 13, Mahmoud Al-Zahar, a co-founder of Hamas, said in an interview with Al Jazeera: ‘When we talk about ‘peaceful resistance,’ we are deceiving the public.’”

“(Hamas’) modus operandi is simple: Lie,” Manalies explained. “Their lies support the stated goal of Hamas: the delegitimization and destruction of Israel.”

In light of Hamas’ open propaganda campaign, Manelis has no apologies.

“Some of Israel’s greatest friends might have preferred that we had looked better in the media this past week, but between vanity and truth, the IDF always chooses truth,” he wrote.

“If in order to win the international propaganda war I need to lie like Hamas, then I prefer to tell the truth and lose. The IDF will win where it matters — protecting our civilians in the face of terror.”