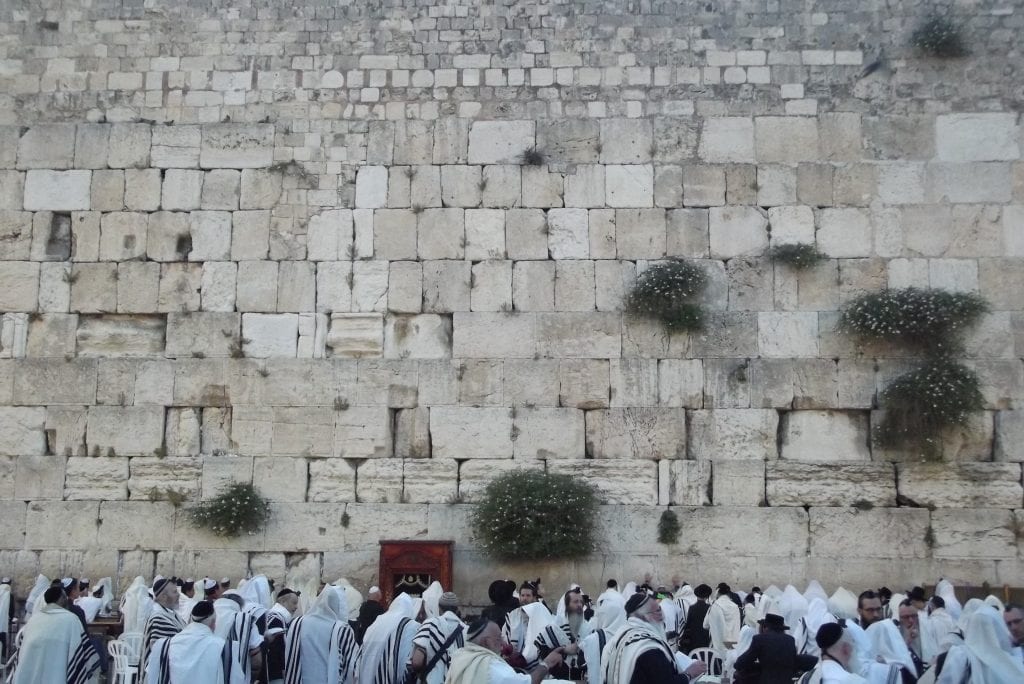 If the Temple were standing, every Jew in Israel would have ascended the Temple Mount on Sunday for the Holiday of Shavuot. I ascended on Monday, referred to as Isru Chag, a day in which the sanctity of the holiday is drawn out and the festive mood draws people to the holy city in droves. In a recent phenomenon that is growing, Jews and non-Jews are lining up to visit the holiest site in the world.

Before ascending the Temple Mount, Jewish men are required to immerse in the mikveh, a ritual bath. So at three AM, I met my three friends at the bathhouse and we quickly showered before stepping into the small pool. The water was unheated, chilly enough to wake me up and then some. We settled into the car for the two and a half hour drive from the Golan region to Jerusalem, air-conditioning and conversation going full-blast to keep the driver awake.

Descending from the mountains to the Kinneret (Sea of Galilee), I thought of how it must have been in the days of my ancestors when 150 miles meant weeks of hard traveling. The three-times a year visit to the Temple was a major commitment of time and energy.

We had decided to make the trip on Isru Chag, the day after Shavuot, which is traditionally a day of added festivity, referred to in Psalms as a “binding” of the festival.

Hashem is Hashem; He has given us light; bind the festal offering to the horns of the mizbayach with cords.” Psalms 118:27

The journey took us down through the Jordan Valley, an agricultural region notoriously hot and arid in the summer, though still cool at night this time of year. It was a long drive but Israel is a beautiful country, even at night.

Since Jews are forbidden from praying on the Temple Mount, our day began with prayers at the Kotel (Western Wall). When we arrived at six, the plaza was already full of men in billowing white prayer shawls, loosely organized into prayer quorums.

Torah scrolls, encased in elaborate Sephardi style wooden containers, circulated as needed, the chanting of prayers filling the air. The murmur of prayer was cut by the shrill cries of a flock of starlings circling incessantly within the small square of air over the Kotel plaza.

Ramadan began last week so tensions were a bit higher than usual, with more police on hand than was normally seen. We lined up for the security check in the wooden tunnel leading up to the Mughrabi gate. The line of non-Jewish visitors filed past as we waited. Identity cards were collected and returned, laptop computers stored away in lockers, and bags inspected.

No religious items are permitted in and small books are inspected to ensure no prayer books make it onto the Temple Mount. Jews do not wear leather shoes onto the site, so several men ascended in their stocking feet while others wore rubber shoes and sandals.

The police were diligent but pleasant, stern but not aggressive. The rules were recited out loud:

“No praying, no singing, no lying down, no religious symbols, no Israeli flags.”

These rules applied to Jews and Christians alike but only Jews were warned. Christians are in fact prohibited from praying at the site, and recently, a conflict with the Waqf (Muslim authority) took place when an American flag was waved on the site.

I discovered an additional rule this visit.  Dr. Meir Antopolsky was preparing to take a group from Bejing, China up to the Temple Mount. They had studied Arise and Ascend, his book on the subject and had contacted him from China, requesting that he lead them around the site. The police were in a quandary: he could not enter the site as a non-Jew and they could not enter as Jews. Due to the inequity of the rules and stringencies, Jews and Christians may not visit the site together. In the end, they were not permitted to tour the site with their guide, and a security incident nearly broke out when they waved at our group while touring the site.

“It is bad enough to discriminate against non-Muslims,” the guide told me. “But by preventing us from being together, whether it is intentional or not, they are preventing the prophecy of this place being a ‘House of Prayer for All Nations.'”

As if to emphasize the seriousness of the situation, just before advancing up the tunnel towards the Mughrabi Gate, a group of soldiers entered by a side door wearing the grey uniforms of the Yassam, the police special forces. Heavily armed and armored, one soldier bristled with canisters of tear gas. For us Jews, a trip to this holy site in the heart of our capital was undeniably fraught with danger.

Underlying the seriousness of the situation, the knowledge that we were about to enter one of the major places of conflict between Israelis and Palestinians was the feeling that this was the source of our deepest joy. And when the security checks were complete, this joy bubbled up in song as we walked upwards towards the gate.

“Yibaneh Hamikdash” (May the Temple be built) was sung until the final moment, the police waiting patiently until we finished the last chorus. Such a song could not be heard on the other side of the metal doors lest Arab anger be incited, but on this side, nothing could stop this prayer.

At least twelve policemen accompanied us, ensuring that we kept moving at a brisk pace while watching carefully that none of the rules were broken. They were stern and unsmiling, quick to warn stragglers. But they were putting themselves in harm’s way to ensure that Jews could come here. I believe they love this mission, one of the more noble services a policeman can perform.

As we walked, I was struck by the sheer size of the Temple Mount. It is, after all, a mountaintop. The entire world focuses its attention on the Golden Dome while most of the site is ignored and neglected, covered in olive orchards or empty fields covered in piles of stones.

I see the stones and my heart longs to collect them in some non-Muslim corner, rearrange the stones that were once my Temple in order to build a small synagogue where I could hide away and worship close to my God’s chosen site. But for the time being, no such corner exists.

This visit held many surprises. There is some serious construction going on. This has happened in the past and was never good for the Jews. The Waqf never exercises caution when working at the site. Construction projects have been a thinly disguised excuse for destroying the precious artifacts that remain from the Jewish Temples.

A pile of timber behind the gates of the Gates of Mercy, also known as the Golden Gates, is actually a collection of beams from the First and Second Temples, cedar imported from Lebanon when Solomon was king. Jews may not enter the gates, so the timber lies rotting away under our eyes.

I realized that the destruction of the Temples, once in 587 BCE and again in 70 CE, has not stopped. It is ongoing, taking place every day, perpetrated by Arab contractors, Arab workers with shovels and tractors. And when the final traces are well and truly gone, the Palestinian claim that there is no connection between Judaism and its holiest site will finally be true.

There was a surprise in store: whether by mistake or design, the police escort brought us closer to the Golden Dome than any of us had ever been before. We came to the steps leading up and rather than stop, they continued on up, admonishing us to keep up. We stood dumbfounded, overwhelmed by the palpable holiness that emanated from underneath the building. A secular Israeli news crew that had joined us stopped their broadcasting to take in the experience. Holiness, normally a theological concept, surrounded us, penetrated us, and left every person (except the Muslims wandering around) gasping for breath. I was literally shaking from head to toes, mustering every ounce of strength I had to stop myself from crying. I was well and truly overwhelmed by God’s holy presence in a manner my Western cynicism could not handle. Tears, the most natural human reaction to the experience, would have gotten me ejected from the site and black-listed. I longed to prostrate myself, to acknowledge my mortality in front of my God. Yet I could not.

The group stopped for a few minutes as a Rabbi Eliyahu Veber delivered a lesson, reciting by memory the Talmud pertaining to the sacrifices of this specific day.

We stopped several times for short lessons, and as we walked, I was shocked to see men in the group reciting Psalms. When the group stopped, several men stood silently with their eyes closed, lost in intense prayer. I realized that despite their best efforts, the Muslim Authority could not ever stop Jews from praying. In fact, throughout history, men seeking to dominate and oppress have never been able to stop prayer. And as we left the site, exiting into the dark depths of the Muslim Quarter, finally able to sing the joy that we felt in our hearts, I realized that these small prayers murmured on the Temple Mount, these scattered words of Psalms and especially these words of Torah, will eventually have a cumulative effect. Eventually, cracks in the wall will appear and the walls will crumble. Jews have not forsaken God’s House for 2,000 years as my presence at the site bears witness. God willing, I shall return to bear witness again and to add a few more words to the cause.

Yoel Elitzur, a professor at Hebrew University, ascends the Temple Mount at least once a month and was there on Isru Chag.

“There is nothing more important than going to the Temple Mount,” Professor Elitzur told Breaking Israel News. “Let’s assume that God does exist. If you believe that, then you need to believe that the Jewish Temples stood here and that it was important to God.”

One man who visited the site described the absurdity of relinquishing the control of the Temple Mount after the 1967 Six Day War.

“It’s like wanting to marry a woman for so long, and then finally having her waiting under the chuppah (marriage canopy) for you. But then after marrying her, you leave her to go watch a football game on television on your wedding night. Hashem was left standing there, waiting for us in precisely that way.”