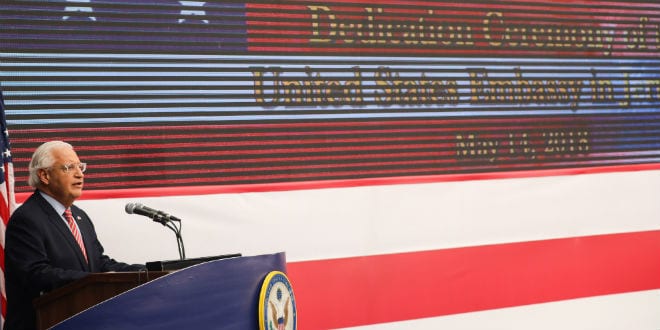 The historic opening of the US Embassy in Jerusalem was a religious as well as a political event with several prominent Christian leaders present. This support was not lost on US Ambassador David Friedman. In an interview with the New York Times on Saturday, Friedman said that Evangelical Christians “support Israel with much greater fervor and devotion than many in the Jewish community.”

“You’re running a country, you need friends, you need alliances, you need to protect your people,” Friedman said. Friedman, an Orthodox Jew and ardent supporter of Israel, acknowledged that Christian support was essential to the embassy move and as such, invited Pastor Robert Jeffress and Rev. John C. Hagee to speak at the opening because “they’re two of the most followed leaders of the Evangelical community, and I wanted to honor the community for having been so constructive in helping to move this along.”

This opinion was echoed by diplomats from the Israeli side. Ron Dermer, the Israeli Ambassador to the US was quoted in the article as saying that “devout Christians” were now the “backbone” of the United States support for Israel. “It’s got to be a solid quarter of the population, and that is maybe 10, 15, 20 times the Jewish population,” he said in an interview.

Devout Christians tend to vote Republican while secular liberal American Jews have traditionally supported the Democratic party. Dermer said that it was important to work towards bipartisan support for Israel that included both devout Christians and secular Jews.

You could say there’s a shift here or there, but obviously for us, it’s important that we have strong support that’s very broad and bipartisan,” Dermer said. “You can’t fly a plane with one wing.”

The selection of Jeffress was controversial and Senate candidate Mitt Romney of Utah said on the Sunday preceding the embassy opening  that Jeffress minister shouldn’t be giving the opening prayer at the ceremony because he was a “religious bigot.” This came in response to remarks Jeffress made in the past in which he said that Jews are going to hell and that Hitler was part of God’s plan to return Jews to Israel.

Jeffress related to this criticism in the New York Times article, stating that this common Christian belief is not anti-Semitic.

“The fact that Christians believe salvation is through faith in Christ alone is neither bigoted or newsworthy,” he said in an interview. “The Jewish people and Israel understand that, and they count evangelicals as their most supportive friends.”

He credited this criticism as a left-wing attempt to drive a wedge between Israel and President Trump.

“It’s no secret the left absolutely hates this move to recognize Jerusalem as the capital, and they are going to attack it from any angle they can,” he said. “This is part of a bigger attempt to discredit President Trump, and it is having no effect whatsoever.”