Granddaughter of Nazis Brings Healing Through Reconciliation With Israel

Home » Granddaughter of Nazis Brings Healing Through Reconciliation With Israel 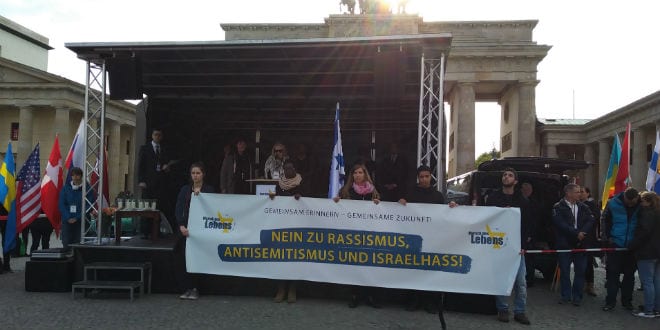 With two grandfathers who served in the Wehrmacht, Nazi Germany’s army, in World War II, Claudia Kiesinger has devoted her life to healing the wounds of the Holocaust through love of Israel. Her remarkable story tells of hope and devotion and most of all, opening up to the healing power that comes from above.

Her story begins in Germany, where she was born.

“Of course in Germany we hear about the holocaust quite a bit,” Kiesinger told Breaking Israel News. “Of course, we knew it was terrible and the Germans did bad things, but like many of my generation, I was mostly indifferent.”

Kiesinger knew that her grandfathers had both been members of the Nazi party and served in the Wehrmacht.

“My grandfathers were not directly involved in the Holocaust but of course they knew about it,” Claudia said. “One grandfather would often be skeptical, rejecting criticism of Germany over the Holocaust. He would question how bad the holocaust actually was, how many Jews were actually killed, all while praising the wonderful things Hitler did for the economy and the culture of Germany. We didn’t question him because it always led to a bad fight. Eventually, this led to indifference. I accepted the Holocaust.”

Out of a growing desire to know more about this dark cloud that hung over her family’s past, Claudia took part in the first March of Life, a memorial march at historic locations of the Holocaust, in 2007. Three hundred fifty participants from 14 nations walked over 200 miles from Bisingen, a concentration camp near Tuebingen in southwest Germany, to Dachau,in upper Bavaria. The route recreated the final death-march of the Jews imprisoned in those camps. At the end of the war, the Jews were led to their deaths, starving and cold, in a final desperate effort by the Nazis to hide the human evidence of their evil deeds.

“I had never even been in a camp,” Claudia said. “We met survivors who related what they had gone through. Children and grandchildren of Germans who played a part told what they knew.

“The experience changed her indifference, transforming it into a mission.

“Suddenly, I realized that we need to remember in order to reconcile the past. We need acknowledge the past and raise our voices against anti-semitism.”

The process recently became even more personal for Claudia.

“Not so long ago, my family found pictures from the war and among them, were horrible photos of the Holocaust. My grandfather took those photos. Even if he did not take part in what the photos showed, it was clear he knew it was happening.”

“I know it affected him deeply and changed him. He became an angry man and my father did not have a good relationship with him. I need to help that heal. Seeing the root of this fear and hatred is the only way to do this. Too often, the response is to look away, to say that you shouldn’t say bad things about the dead. I am dealing with this in a deeply personal way, through prayer and action.”

Claudia emphasized that reconciling with the past does not mean placing blame on the Germans who went through World War II. For her, it is all about being able to move into a better future.

“I can’t judge them,” she said. “I don’t know what I would have done at that point in history. But the facts are that my grandfathers were part of it. I have to decide for myself what I am going to do about it now. I have to make a difference or this will happen again.”

The march made her connection to the Holocaust into a personal commitment.

“One survivor who was on the first march, Rose Price, became very close to my family, visiting our house and cooking with my mother,” Claudia related. “One evening, Rose turned to me and said, ‘I am glad you are my friend because if it happens again, I will not be alone.’”

This simple message made a deep impression on Claudia.

“I knew in that second that this was what it was about. If it happens again, will I be silent like so many Germans were, or will I stand with the Jews? I made a decision not to ever be silent.”

And for Claudia, the anti-Semitism that led to Nazi Germany is still present today.

“I didn’t have any connection with Israel before,” she said. “But I have to stand with Israel now. The claims made against Israel about being murderers are blood libels in disguise.”

The blood libel refers to a centuries-old false allegation that Jews murder Christians – especially Christian children – to use their blood for ritual purposes.

“Israel isn’t perfect but Israel is being out to be the bad guy in every situation and this is simply a lie,” she said. “These accusations are being used to disguise anti-semitism. Israel is God’s chosen people and this is the land He promised to them.”

Claudia has an additional reason to love Israel. As a devout Christian, connecting with Israel has become a religious imperative.

“Jesus was a Jew,” she noted. “There is a richness in learning about the Biblical Feasts and the Jewish holidays. Christians and Jews believe in the same God. Early on, the Church lost that. We were too influenced by Greek thinking, which puts a man on the throne.”

People who are familiar with the Jewish process of Tshuva (repentance) will appreciate the type of reconciliation Claudia is trying to accomplish and the steps she is taking to achieve that goal.

“First I ask Jesus for forgiveness,” she said. “But I also need to express how sorry I am to the survivors. It is not the point for them to forgive the Holocaust. The point is for me, as a Christian to experience this regret. I need to do this to receive God’s blessing.”

She related the story of a friend who had a similar family background, a Nazi background the family hid away. The grandfather refused to speak about his experiences in the war and Claudia’s friend decided to investigate. She was able to access documentation that indicated her grandfather had been an electrician in the war. Finally, his sister, the friend’s aunt, opened up. The grandfather had done the wiring in Auschwitz and helped build the camp. After the friend confronted her aunt, she admitted that her brother helped build the gas chambers.

“This is also important for the survivors, many of whom still can’t speak about their experiences. I have seen many survivors open up after hearing from Germans speak about the Holocaust.”

For Claudia, this is the only path to moving forward.

“We need to open up so that God can give a healing rather than keeping it locked up in our hearts.”

Claudia lives in New York City where she organizes prayer groups at the United Nations to pray for the sake of Israel.