For Eliezer Ben Yehuda, the Prophetic Return of the Hebrew Language was ‘No Dream’

Home » For Eliezer Ben Yehuda, the Prophetic Return of the Hebrew Language was ‘No Dream’ 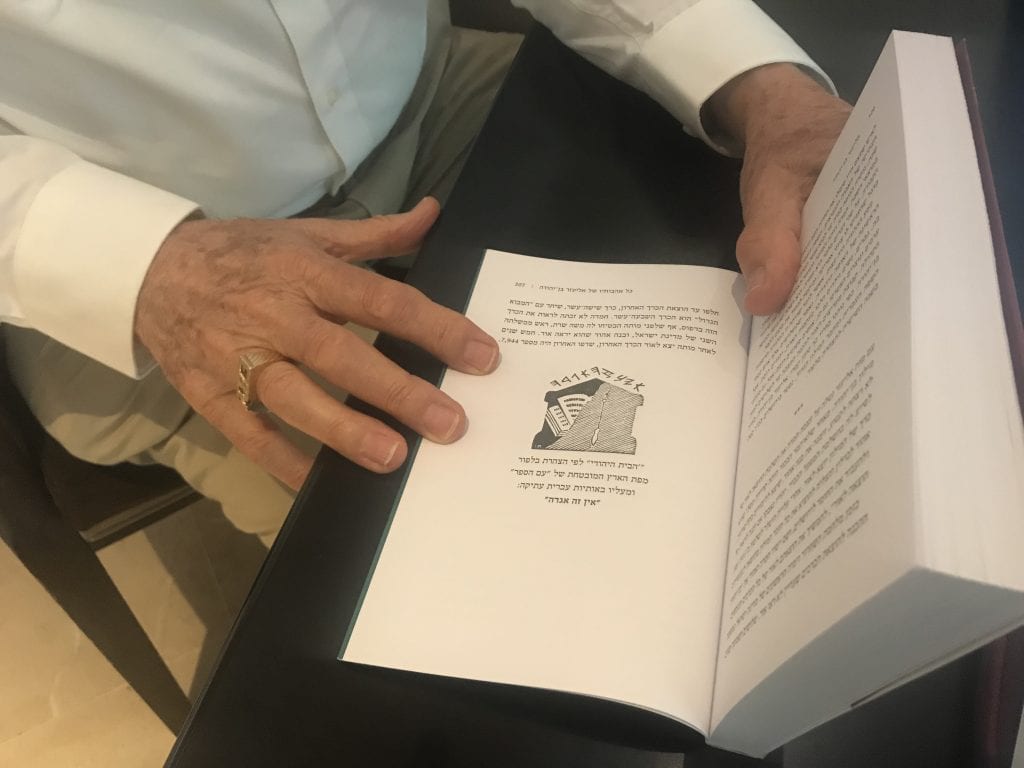 Eliezer Ben Yehuda is on a mission.

The grandson of the elder Eliezer Ben Yehuda, who revitalized the Hebrew language in late 19th century, the younger Ben Yehuda is on another mission, but no less dedicated. Ben Yehuda wants to change the perception of his grandfather in the Jewish world – mainly Israelis.

Ben Yehuda told Breaking Israel News that the common image of his grandfather has been negatively shaped by Israeli popular songs, which have called him a “Jewish joker” stimulated by a “feverish mind.”

Ben Yehuda has therefore dedicated the last 10 years of his life to writing books about his grandfather and going on speaking tours to rebrand him as a hero, both in the Jewish and Christian worlds.

He explained that one of the modern problems of the Jewish and Christian Zionist worlds is that we are “bereft of heroes since the 1973 Yom Kippur War.” Having someone to look up to, said Ben Yehuda, would further unite those who love the Jewish people and Israel.

He tells the story of how his grandfather – born Eliezer Yitzhak Perlman in Luzhki, modern-day Belarus – began to study Biblical Hebrew from the ripe age of three, as was customary for Eastern European Jews of the time. A natural polyglot, he began to read the Hebrew newspaper HaShahar, learned of the early Zionist movement, and concluded that the revival of the Hebrew language in Israel could unite global Jewry. So Ben Yehuda published a Hebrew newspaper and later, a dictionary, in which he coined modern Hebrew words that were not found in the Hebrew scriptures, such as “dictionary,” “newspaper,” “fashion,” “doll,” “towel” and “bicycle.”

“He believed that the reason for problems within the Jewish world was because we were not a nation,” explained Ben Yehuda. “We had no similarities, we didn’t care for one another and we were split. In the first aliyah, they didn’t speak the same tongue, and as Winston Churchill says, ‘together we stand, divided we fall.’”

He said it is due to his grandfather’s efforts that the declaration of independence was read first in Hebrew, and it remained the national language of the State of Israel. If it were up to Theodore Herzl, often called the father of modern Zionism, the younger Ben Yehuda claimed that the declaration of independence would have likely been read in German.

“He coined the German phrase ‘Altneuland’ meaning ‘old newland’ describing the Jewish state in the land of Israel. Herzl thought that the Jews in their new state would speak German,” Ben Yehuda told Breaking Israel News.

“Imagine in 1948, if David Gruen – the birth name of David Ben-Gurion – spoke in German the declaration of Jewish independence. It would have been a joke of history, it would be tragic,” Ben Yehuda exclaimed.

He further noted, “While Herzl said ‘if you will it, it is no dream,’ Eliezer Ben Yehuda said ‘it is no dream.’ Period. Not up for debate. So he succeeded in uniting the Jews to speak Hebrew,” said Ben Yehuda, noting that his grandfather’s vision was not just practical, but also prophetic.

He told Breaking Israel News, “Like Isaiah, my grandfather had a vision in Hebrew that never left him.”

Ben Yehuda quotes his grandfather as saying, “I had a vision, and in my vision I was removed from Eastern Europe from cold misery of the winter and passed onto the passage of the Jordan by Jericho where the children of Israel passed over. I was walking towards the water and a voice sounded in my ears and it said ‘the redemption of Israel in its land and its language.’”

The elder Eliezer Ben Yehuda immigrated to Ottoman Palestine in 1881 and set out to revive the language of the Hebrew Scriptures, in order to facilitate the communication of Jews around the world.  Doing so would not only unite the Jewish world, he believed, but also fulfill the Biblical prophecy described by prophet Zephaniah in which all the nations of the world will have “purity of speech” in the End of Days:

For then I will make the peoples pure of speech, so that they all invoke Hashem by name and serve Him with one accord. (Zephaniah 3:9)

Indeed, according to Rabbi Tuly Weisz, Director of Israel365 and publisher of The Israel Bible and Breaking Israel News, Jewish tradition has always maintained that the pure language that Zephaniah promises is the language of Hebrew.

Rabbi Weisz said, “The prophet describes how in the future, all the nations of the world will have ‘pure speech,’ safa b’rurah. Ibn Ezra, among other commentators, maintains that the pure speech that Tzefanya promises is the language of Hebrew, and that in future times the whole world will begin to learn Hebrew, the language of Creation. Biblical Hebrew is known as lashon hakodesh,‘the holy language’. The Ramban (Exodus 30:13) adds that what makes this language holy is that “it is the language with which God speaks with His prophets and His nation.”

“This verse is another incredible example of an obscure prophecy that has come to prominent fruition in our generation, as millions of people all over the world, both Jews and gentiles, are learning Hebrew in order to speak lashon hakodesh,” added Weisz.

Today, as Ben Yehuda speaks to Jews and Christians, he maintains that “we are all brothers and we just need to open our eyes and to learn the things that we have in common,” such as the language of the Hebrew Scriptures.

According to Rabbi Weisz, Christian interest is growing in learning Hebrew to read the Bible in its truest form, likely a step toward the redemption described by Zephaniah. He said that

unlike in the generation of Babel, nations are coming together to serve God through this “language of purity.”

“With Jews and Christians reconciling for the first time in history, may our sense of unity not be for the glory of man, but may we study together the language of Hebrew to build a great tower to the One true God of Israel,” said Rabbi Weisz.