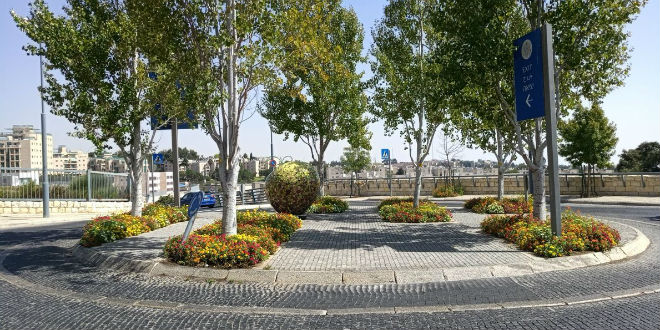 The Jerusalem municipality plans to inaugurate the naming of a square outside the new US embassy in Jerusalem, in the presence of officials from the Trump administration, according to the Hadashot news outlet.

A square located next to the US embassy in Jerusalem will be named, “United States Square in Honor of (US President) Donald Trump,” the city’s mayor, Nir Barkat revealed.

“President Trump decided to recognize Jerusalem as the capital of the Jewish people, to stand on the side of historical truth and to follow through with the right thing,” Barkat was quoted as saying.

“The naming of the square in honor of President Trump is Jerusalem’s way of returning love to the president and to the people of the United States who stand to the right of the State of Israel.”

Barkat posted a similar statement on Twitter this past Tuesday.

President Trump has recognized #Jerusalem as the capital of the Jewish people.

To show our love and respect for @POTUS and the American people, who always stand by the side of Israel and Jerusalem, we will name a square next to the new #USEmbassy in honor of the President. pic.twitter.com/cUh8JITLmF

Interestingly enough, the municipality’s decision to grant the new name to the square was actually made a year ago by the Names Committee and well before Trump officially announced his decision in December to move the US embassy in Israel from Tel Aviv to Jerusalem.

Moreover, this will not be the first honor in Israel that Trump will receive for deciding to move the US embassy. Transportation Minister Yisrael Katz had announced a few weeks after Trump’s announcement that a new underground train station at Jerusalem’s Western Wall would be named after the US president.

The municipality of Kiryat Yam, located near Haifa, had also announced its intention to name a new park in the city after Trump. The decision elicited a response from Trump in which he conveyed his gratitude to the municipality.

“Thank you for this great honor,” Trump wrote in a letter to the city’s mayor, David Even Tzur. “I am thankful for your gesture and am moved to know that the people of Israel are encouraged by my decision to recognize Jerusalem as the capital of Israel.”