Gazan Protester Demanded IDF Shoot Him to Get $500 From Hamas 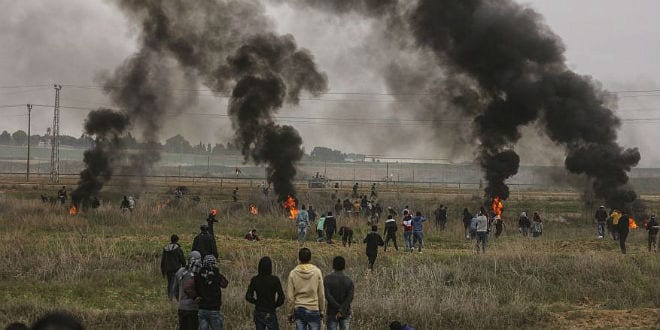 During the protests at the security fence separating Israel from Gaza, a member of Hamas approached the fence and requested the IDF shoot him so that he would receive a $500 payment from his terror bosses.

YNet news site reported that on Tuesday, 20-year-old Mustaffa Banna was charged with security offenses in an Israeli court. The charges included entering a closed military zone, membership in a terror organization, providing measures to commit a crime and arms offenses. According to the evidence presented to the court, Banna joined Hamas last year and was involved in digging terror tunnels into Israel. Banna was also accused of taking an active role in attacking the security fence as part of the Hamas-led protests in early April.

On March 30, Hamas initiated a six-week-long series of protests along the security fence separating Gaza from Israel they dubbed “The Great March Of Return”. The goal of the march was to eradicate the security border in order to arrive at cities in Israel the Palestinians claim as their own exclusive property. Though Palestinian sources claim the protests are non-violent, there is a vast amount of video evidence that this is not the case. Protesters use slings and jury-rigged catapults loaded with firebombs to attack IDF troops protecting the border. In addition, thousands of tires have been burned to obscure the IDF’s field of view. The IDF has responded with crowd control measures such as tear gas and rubber bullets. As per the IDF’s rules-of-engagement, the soldiers resorted to sniper fire in life-threatening situations. As a result, 43 Palestinians have been killed by IDF gunfire since the protests began.

According to the charges filed in court, Banna approached the security fence with the intention of getting wounded by IDF fire. He succeeded in arriving at the fence at which point the IDF soldiers ordered him to return to the Gaza side of the buffer zone. Banna ignored the instructions and called out for one of the soldiers to shoot and injure him. A group of Hamas military personnel arrived and ordered Banna to return but he refused. At that point, Banna began to cross the security fence leading the IDF soldiers to warn him that if he did so, he would be arrested and jailed. Banna crossed the fence and he was indeed arrested.

During his interrogation, Banna told Israeli security officials that he wanted to get shot in order to receive a $500 bonus and the monthly stipend Hamas pays to Palestinians arrested while attacking Israel.

In early April, Hamas spokesman Hazim Qassim revealed on the official Hamas website that the organization paid $500 to Palestinians who were critically injured in confrontations with the IDF during the protest, $200 to those who were moderately injured, and $3,000 to the families of those who were killed. Qassim claimed the payments were part of Hamas’s “social and national responsibility to strengthen the steadfastness of our people in its struggle for return, freedom and breaking the siege.”