Israel Bracing For Potential Security ‘Flashpoints’ in May

Home » Israel Bracing For Potential Security ‘Flashpoints’ in May 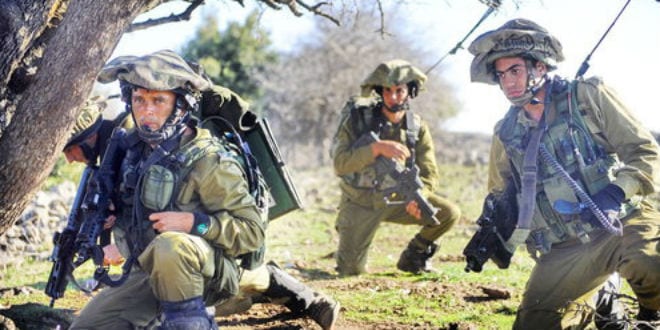 The coming month of May looks set to contain an unusual number of potential escalation points that could converge to create a highly explosive month.

The Israeli defense establishment is dealing with several pending potential flashpoints, including an Iranian threat to revenge a missile attack on an air base in Syria that was housing several senior Islamic Revolutionary Guard Corps officers; a decision by the Trump administration on whether to cancel or amend the nuclear deal with Iran; weekly Hamas-led mass marches on the Gaza-Israel border on Fridays that continue to escalate; the celebration of Jerusalem Day; the expected move of the U.S. Embassy from Tel Aviv to Jerusalem; and the Palestinian day of mourning over the establishment over Israel’s independence, known as Nakba [“Catastrophe”] Day.

Collectively, these incidents have the potential to escalate various fronts at the same time, such as Gaza, eastern Jerusalem and the territories, in addition to Israel’s north, with a Russian, Iranian and even Turkish presence ensconced in Syria.

“The month of May does indeed contain within it more than a few challenges that can change the face of the area in a manner that will obligate us to update some our current policies,” Brig. Gen. (Res) Nitzan Nuriel, former director of the Counter-Terrorism Bureau of at the Prime Minister’s office, told JNS.

As a result, the defense establishment will need to analyze the potential developments and their scope, and on that basis, prepare options that will remain at Israel’s disposal, he added.

“In some of the cases, these are small changes that influence the short term, and in others, the potential is more significant,” said Nuriel.

He described the moving of the U.S. embassy to Jerusalem as an event with short-term influence that may spark violence, but which will likely be temporary, “or at least will not fuel [other] violent incidents.”

Upcoming elections in Lebanon, he said, “actually create new opportunities.” And the pending decision by U.S. President Donald Trump over Iran “could change the rules of the game in the region,” he added.

Dr. Ely Karmon, a senior scholar the International Institute for Counter-Terrorism in Herzliya, Israel, said “the next weeks will represent one of the most explosive regional situations that involve Israel. The most serious one is the attempt by Iran to take advantage of the victory of the Assad regime in its fight against the rebels, a victory to which Iran and its proxies—Hezbollah and the various Shia militias—have had a major role.”

The Russian air campaign was the decisive factor that allowed an Iranian-led victory on the ground in Syria. Now, the Iranian axis and Russia depend on one another—meaning that Russia cannot accept an all-out Israeli war on Iranian forces and proxies, cautioned Karmon.

“The political solution [in Syria] that the Russians dream of also depends, in great measure, on Iranian good will,” he explained. “Tehran, therefore, seems to have decided to continue its strategy” of planting itself in Syria, which itself is part of “a clear anti-Israeli strategy, threatening it from the Syrian and Lebanese borders.”

Karmon warned that Iran’s conflict with Israel is “inevitable” as long as Jerusalem remains convinced that it cannot tolerate the formation of such a severe and direct threat on its northern border, and as long as it continues to “act accordingly, mainly through its air force.”

He noted that “Israel has behaved according to the very clear red lines made public by its military and political leaders, and seems determined to continue.”

Tehran, meanwhile, must also factor in the arrival of a more anti-Iranian White House team. All of these factors are part of the buildup to Trump’s “fateful decision” on May 12 regarding the Iranian nuclear deal, as well as “the unpredictable results of his negotiation with the North Korean dictator, which could directly impact Iran,” assessed Karmon.

An apparent decision by Russia to provide the Assad regime with its advanced S-300 air-defense system is contributing to the instability, he argued. The transfer of this military hardware risks a confrontation with Israel, he said, although “based on a historical perspective, Israel has always found technological and operational solutions to advanced Russian weapons systems.

The Palestinian arena is heating up

Meanwhile, Karmon said, several factors are conspiring to make the Palestinian arena more explosive, including Hamas’s weakness in the face of the Palestinian Authority and its growing regional isolation.

“This situation could get out of control at some point on the border with Gaza, but not in a manner that could threaten Israel strategically, except in the public diplomacy arena,” he said.

However, an escalation of the situation in Gaza could trigger an Iranian move designed to extricate the Iranians from the Israeli challenge in Syria. The Israeli-Iranian tensions remain “the most serious trigger for a direct confrontation in the short term,” stated Karmon.

Professor Uzi Rabi, director of the Moshe Dayan Center for Middle Eastern and African Studies at Tel Aviv University, told JNS that he does expect May to be an “intensive month” with some potential for violence, but added that the chances of it leading to a major armed conflict remained low.

In this region, he said, “explosiveness is not new. I certainly see a potential for the eruption of pinpoint clashes and intensive verbal wars, but not a regional war.”

The reason for this, explained Rabi, is that “no side will emerge with gains from a regional clash or a full-scale war between Iran and Israel. Assad could lose his seat of power; the Russians would not be able to realize their achievements in Syria; Iran is unable to allow itself to get caught up in an adventure that will further destabilize the regime at home; and Israel, too, has no interest in such a war.

“As a result,” continued the academic, “we will see more of the same—meaning what we have had in recent months will continue into the month of May. Perhaps at a higher intensity, but not beyond that.”