Trump Tells Russia to ‘Get Ready’ for Missile Attack in Syria 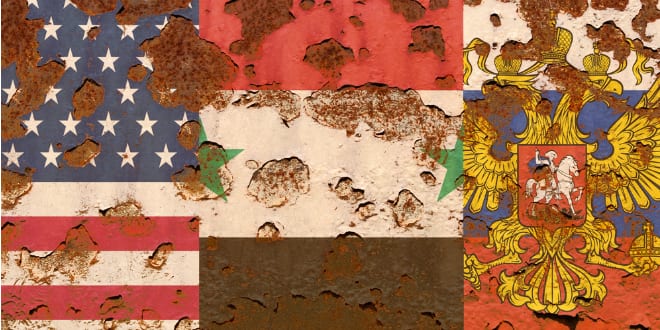 On Wednesday, President Donald Trump tweeted a warning to Russia, telling the former Cold War nemesis of the US to “Get ready” for a missile attack against Syria.

Russia vows to shoot down any and all missiles fired at Syria. Get ready Russia, because they will be coming, nice and new and “smart!” You shouldn’t be partners with a Gas Killing Animal who kills his people and enjoys it!

Trump’s warning concerned  Russian support of Syrian President Bashar Al Assad whose regime forces were accused of dropping bombs loaded with deadly chlorine gas on Saturday into the rebel-held town of Dhouma. At least 49 people were reported killed in the attack. Both the Syrian and Russian governments denied that such an attack occurred.

President Trump immediately condemned the attack, dubbing the Syrian despot “Animal Assad” in a tweet which also threatened Russia for their complicity.

Many dead, including women and children, in mindless CHEMICAL attack in Syria. Area of atrocity is in lockdown and encircled by Syrian Army, making it completely inaccessible to outside world. President Putin, Russia and Iran are responsible for backing Animal Assad. Big price…

The president’s warnings bore the threat of a very real precedent. In April 2017, the US fired 59 Tomahawk cruise missiles at a Syrian military target believed to have been the source of a chemical attack that killed more than 70 Syrians. Russian responded by suspending an agreement aimed at preventing conflict with the US in Syria’s skies.

Russian Defense Committee Chairman Vladimir Shamanov told the Duma (lower house of parliament) on Tuesday that the government was ready to respond to Trump’s threat in any way necessary, including military.

“The politics of double standards have hit rock bottom,” Shamanov was quoted as saying by the TASS Russian news service. “And here the United Russia party conscientiously states that all political, diplomatic and military measures if necessary will be taken. No illegal action will remain unanswered,”

Shamanov included Israel in his threat against the United States, condemning an Israeli Air Force strike against a joint Syrian/Iranian military base on Monday.

“In total violation of international rules, a couple of Israeli jets entered Lebanese airspace, delivered a strike on a neighboring sovereign country…directly on an airfield of the Syrian army. So, the number of countries involved in the conflict is rising.”

This threat was reiterated on Tuesday by Russian ambassador to Lebanon Alexander Zasypkin whose comments were broadcast Tuesday on Hezbollah’s al-Manar TV.

“If there is a strike by the Americans, then…the missiles will be downed and even the sources from which the missiles were fired,” Zasypkin said in Arabic, adding that his government was still ready to hold negotiations.

On Tuesday, Russia and the United States each blocked attempts by the other in the U.N. Security Council  to set up international investigations into chemical weapons attacks in Syria.

This exchange of threats is a disturbing and unprecedented development in Russian-American relations. Except for a minor skirmish at the end of World War, Russian and the US have never engaged in direct military confrontation, preferring to wage major proxy wars in ways that kept the two nations’ militaries separate. The Cold War, overshadowed by nuclear proliferation and a policy of Mutually Assured Destruction (MAD), began as World War Two and ended without any shots being fired when the Soviet Union collapsed in 1991.

In February, this long period of Russian-US non-aggression changed when Assad regime troops attacked a Kurdish-held oilfield in northeastern Syria. Heavy U.S. air strikes and artillery fire repelled the assault, inflicting heavy casualties on the attackers. It was later discovered that many of the dead were Russian mercenaries with estimates of the number killed going as high as 600.