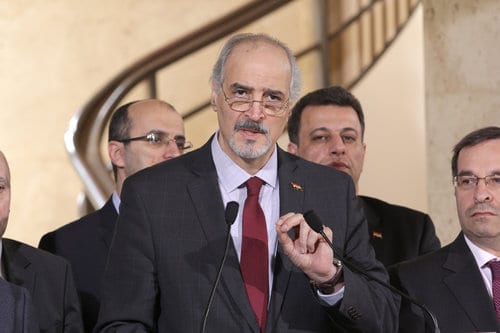 UN Watch, a nongovernmental watchdog agency, protested on Monday the appointment of Syria as Chair the UN Conference on Disarmament, a forum on chemical weapons that will be held next month.

“Having the Syrian regime of Bashar al-Assad preside over global chemical and nuclear weapons disarmament will be like putting a serial rapist in charge of a women’s shelter,” Hillel Neuer, executive director of the Geneva based non-governmental organization, UN Watch said on his group’s website.

The appointment comes less than one week after Syrian President Bashar al-Assad was accused of using chlorine gas in an attack that killed dozens.

The selection of Syria was the result of an automatic rotation of UN member states, but the appointment was so egregious that it generated an immediate and strong negative response. Hillel Neuer, slammed the decision.

Neuer announced that his group intends to hold protests outside the UN hall when the forum is held in Geneva next month.

“The Assad regime’s documented use of chemical weapons remains the most serious violation of the Chemical Weapons Convention in the treaty’s twenty-year history,” Neuer said in his statement.

“We urge the UN to understand that at a time when Syria is gassing its own men, women, and children to death, to see Syria heading the world body that is supposed to protect these victims will simply shock the conscience of humanity.”

Neuer called upon nations participating in the forum to join in the protest.

“United Nations Watch urges the US, Britain, France, Germany, and all other member and observers states to refuse to send ambassadors to any meeting of this UN forum that is being chaired by Syria.”

“The Assad regime simply cannot be a credible chair of this or any other United Nations body. Syria’s use of deadly chemical weapons and its illegal pursuit of nuclear weapons, in breach of its disarmament obligations, run counter to the objectives and fundamental principles of the Conference on Disarmament itself. Syria’s chairmanship will only undermine the integrity of both the disarmament framework and of the United Nations, and no country should support that.”

Though not formally a United Nations organization, the 65-nation Conference on Disarmament was established by the UN in 1979 to be “the single multilateral disarmament negotiating forum of the international community.” In the past, major treaties concerning chemical and biological weapons, nuclear proliferation and weapons of mass destruction have been negotiated at the conference.

The conference takes place annually in three separate sessions, each lasting several weeks. Syria is slated to chair the three-week session that begins May 28. Turkey will preside over the following session starting in August. Turkey was accused of using chemical weapons against the Kurds in their military incursion into Afrin, Syria in February.

In addition to these appointments, the conference has also been criticized for failing to produce any meaningful results in the past 20 years.

“The Conference on Disarmament has been deadlocked since the agreement on the Comprehensive Test Ban Treaty, more than two decades ago,” Miroslav Lajčák, the President of the UN General Assembly, stated in February. “We have to address this reality.”